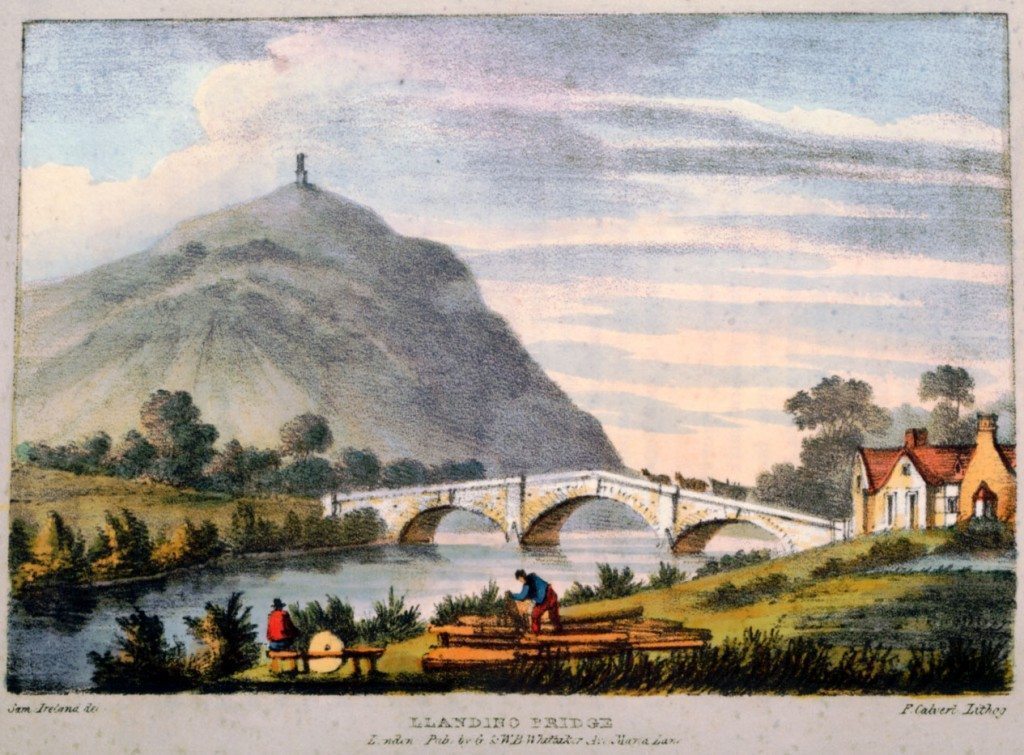 Image: Llandrinio Bridge, Montgomeryshire. As the Severn draws closer to Shrewsbury, the extent of river traffic increases and Harral comments on the growth of roads and evidence of prosperity.

[Image from Thomas Harral, Picturesque Views of the Severn, 1824.

“About three quarters of a mile from the town of Welch Pool, the Severn, increasing in importance, is navigable for small barges up to a place called Pool’s Stake, or Pool Quay, where it receives the waters of a rivulet called the Gledding. Hence its navigation is continued all the way down to Portshead Point; a distance probably little short of two hundred miles, without any lock, or the least assistance from art. The Thames, it may be remarked, would not be navigable, without much assistance, much higher than Richmond; certainly not half that distance from its mouth, at the Nore.

The traffic here is carried on by vessels of two sorts, barges, or frigates, as they are called, and trows. The former from forty to sixty feet in length, bear a single mast with a square sail, and carry from twenty to forty tons. The trows, or larger vessels, are from forty to eighty tons burden. These have a main and top mast, about eighty feet high, with square sails; and some have mizzen masts. They are generally from sixteen to twenty feet wide, and sixty long. When new, and completely fitted out, they are probably worth from £300 to £400 a piece.

As far back as the year 1758, the number of vessels employed between Welch Pool and Gloucester amounted to four hundred: they were mostly navigated by three or four men each, robust and resolute fellows. This trade has proved a valuable nursery for seamen.

At Buttington, Mr Ireland was desirous of obtaining a boat to convey him to Shrewsbury; but he was disappointed, as the only acquatic conveyance that happened to present itself was one of the ancient British coracles, which are yet extensively in use for the fisheries on the Welch rivers.

Six miles below New Quay, at a small village called Llandrinio, one of the roads from Lllanfyllin to Shrewsbury crosses by a handsome stone bridge of three arches….this is the first bridge of stone over the Severn. Two miles below Severn receives a tributary from the Virnwy – adds greatly to its size.

At Montford Bridge, the great road from London to Holyhead crosses the Severn. This bridge, built of a reddish stone, was unfinished at the period when the annexed view was taken. It consists of three arches, and was erected after the design of Mr Carlisle, of Shrewsbury. At this part the river is about thirty yards wide.

Various improvements have recently been made in the road between Montford-Bridge and Oswestry, by the removal of mud banks, by making small cuttings and embankings, and by widening; effected by cutting off quick bends, setting back fences, and re-constructing the surface. It is also intended to ease the hill, by cutting, widening, embanking, and removing the road near the bottom.

From Montford Bridge to Shrewsbury, the country is eminently fertile, and exuberantly chequered with meadow and cornlands, which constitute the uninterrupted embellishments of the expanding current: whose banks continue to be no less adorned by the villas of the opulent; and the rich and tasteful style of the buildings, – seeming to vie with each other in a display of the wealth and liberality of the prolific county of Salop.”