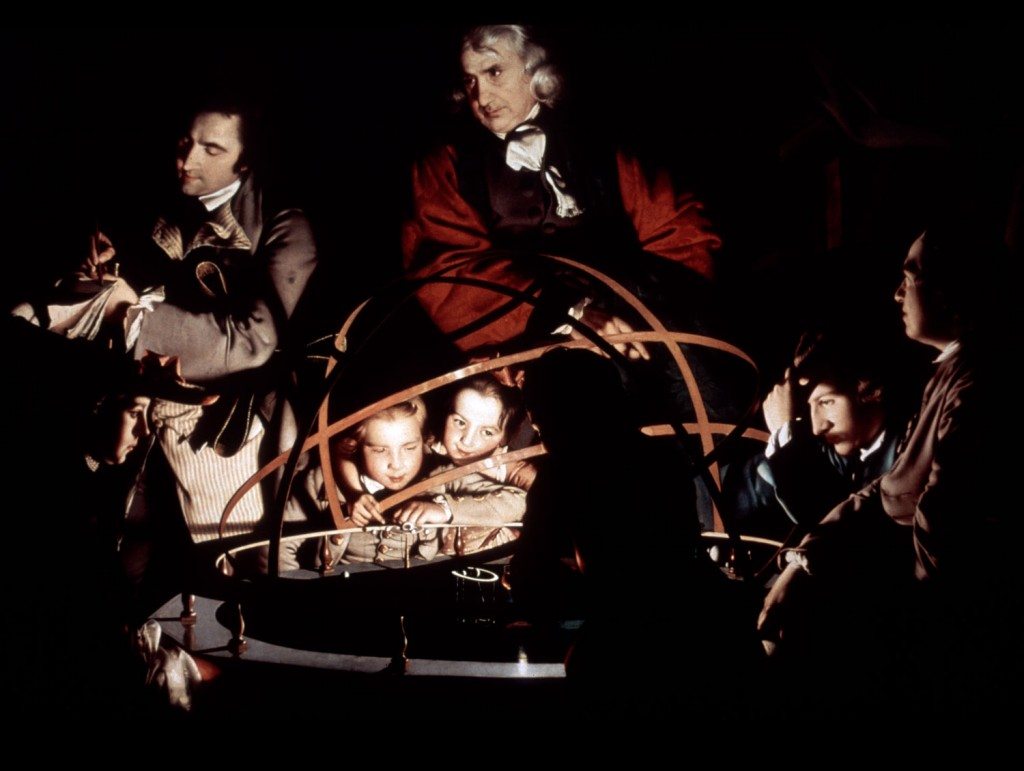 Public scientific lectures became popular during the Age of Reason. As the ‘enlightening’ was addressed to various levels of the nation, such lectures were attended by very mixed audiences. The Scottish scientist, astronomer and lecturer James Ferguson (1710- 1776) undertook a series of lectures in Derby in July 1762. They were based on his book Lectures on Select Subjects in Mechanics, Hydrostatics, Pneumatics, Optics &c., published in 1760. In order to illustrate his lectures he used various machines, models and instruments.

The Orrery is a mechanical model that shows the motion of planets around the Sun, the Moon around the Earth, or both. It was named after Charles Boyle (1676-1731), Earl of Orrery, who supported and patronised the design of an early planetarium by George Graham between 1704 and 1709. James Ferguson himself designed several astronomical clocks and orreries for use in his lectures.

Wright possibly attended Ferguson’s lecture, especially as tickets for the event were available from John Whitehurst, his close neighbour, the clockmaker and scientist. The artist could also have drawn on Whitehurst’s practical knowledge to find out more about the orrery and its operation.

Whitehurst’s own premises, and Richard Greene’s museum of curiosities in Lichfield, might have provided Wright with other visual ideas of astronomical models and the details of instruments, which are clearly shown in his splendid painting.

The full title of the painting – “A Philosopher giving a Lecture on the Orrery in which a lamp is put in place of the Sun” – reveals its scientific subject: the demonstration the movement of the planets around the Sun, and an explanation of eclipses of the Sun. The painting was bought by the 5th Earl Ferrers, an amateur astronomer, who was himself the owner of a complicated orrery.

The painting is full of meanings and open to various interpretations. The artist did not paint one particular meeting, and the characters in the picture are not exactly portraits, although the man making notes has been recognised as Peter Perez Burdett, one of Wright’s friends, a surveyor, mathematician and artist. There is also a suggestion that Earl Ferrers and his nephew are depicted. The Philosopher dominates his audience, and he is the only character in the picture who has not been recognised as a real person. It was suggested that Wright deliberately gave him a good deal of the physical appearance of Sir Isaac Newton (1643-1727). In his Principia (1687) Newton unified the terrestrial and celestial worlds – he demonstrated that bodies which fell “naturally” on Earth and the motions of celestial bodies obeyed the same great law – the law of universal gravitation. Newton presented the universe as an ordered harmonious system.

The spectators in the picture respond to the idea of this newly perceived universal order with wonder, fascination, or awe. Their illuminated faces, emerging from the darkness of the room and darkness of ignorance, signify the illumination of their minds by the light of Science. They are literally experiencing Enlightenment, in both physical and intellectual senses.