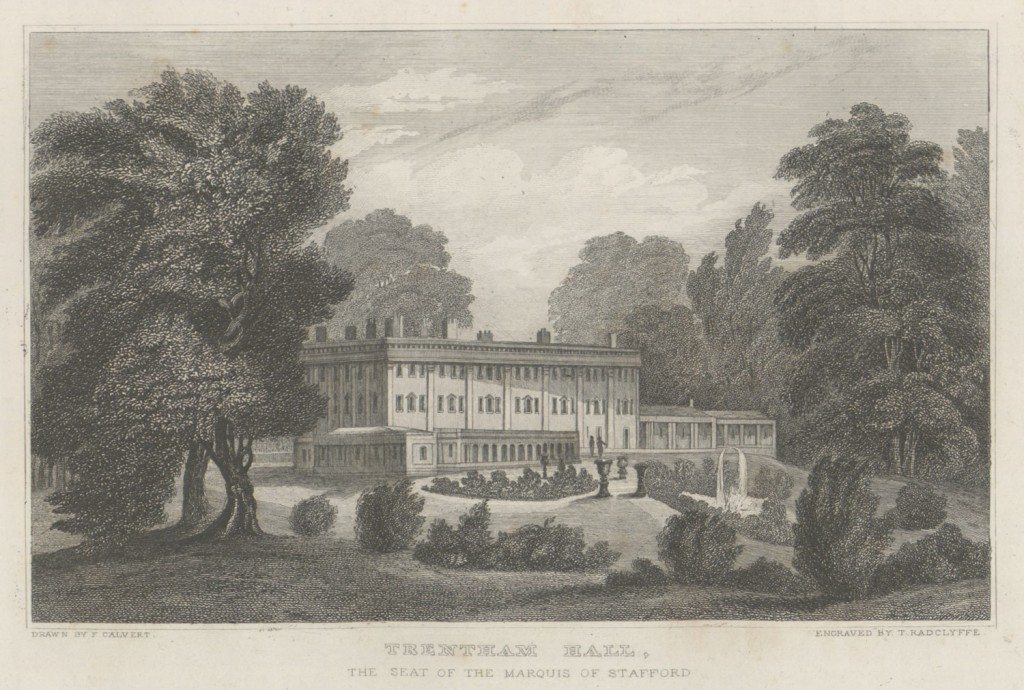 George Granville Leveson-Gower, 2nd Marquis of Stafford, 1st Duke of Sutherland (1758-1833) has been called “The Leviathan of Wealth” and “the richest man that ever died”.  In the early 19th century his family was probably the richest in Britain.  This great wealth came from ownership of land, exploitation of the mineral resources their estates contained and, as Disraeli pointed out “a talent for marrying heiresses”.

As the eldest son of Granville, 2nd Earl Gower, 1st Marquis of Stafford and his second wife, Lady Louisa Egerton, favourite sister of the heirless Duke of Bridgewater, he inherited the revenues of the Bridgewater Canal when his uncle died in 1803. In the same year his father died and he inherited the family estates at Lilleshall in Shropshire and Trentham in Staffordshire.

George Granville’s father, Granville, 2nd Earl Gower, 1st Marquis of Stafford, (1721-1803) had married as his second wife lady Louisa Egerton, favourite sister of the heirless 2nd Duke of Bridgewater.  When he died in 1803 the Duke left the substantial annual profits from the Bridgewater Canal to her eldest son, George Granville.

George Granville’s own marriage in 1785 to Elizabeth, Countess of Sutherland, Baroness of Strathnavar (1765-1839) in 1785, brought him vast estates in Scotland, with a further seat at Dunrobin Castle. She had inherited vast estates in Sutherland, amounting to 1¼ million acres at the age of 1 when her parents died of putrid fever in Bath in 1766.

Thus the family came to have three major seats, Dunrobin in Scotland, Lilleshall Hall, extensively rebuilt by Wyatville in the 1820s to provide a home for the family heir and Trentham Hall, a very grand Italianate palace, with a lake, formal gardens, terraces and woods.  This was improved at a cost of £123,000 in the 1830s.

His vast wealth was partly derived from the exploitation of the mineral wealth of his English estates through enterprises such as the Lilleshall Co. Coal, lime and ironstone were carried on the Donnington Wood Canal at Lilleshall, built by his father.  George Granville continued to invest in canal projects.  He recognised the threat of the railways and invested in them in an attempt to protect his canal interests.

With his chief agent, James Loch, he became widely unpopular for the Highland Clearances carried out around 1810 on the Sutherland estate.  He had been shocked by the living conditions of his Scottish tenants and they were forcibly resettled in new industries on the coast.  He was therefore held responsible for the destruction of the Highland way of life.  The English estates in the West Midlands were also improved, although not in such a drastic manner.

George Granville’s political career was less illustrious than that of his father, although he did serve as an MP and Ambassador to Paris. Later, he supported Catholic Emancipation and the Reform Bill.  As a reward he was created the Duke of Sutherland in 1833.

On his death in 1833 the Bridgewater inheritance passed to his second son, Francis, who later became the Earl of Ellesmere, taking his grandmother’s name of Egerton.  His railway interests and the rest of the estates went to his eldest son, the 2nd Duke of Sutherland.

In 1827 George Granville, Lord Stafford, bought the mansion York House in London from the government.  It had been built by George IV’s brother, the Duke of York, who died, seriously in debt, before it was finished.  George Granville spent a further £150,000 completing and extending it, changing the name to Stafford House.  It was widely regarded as the grandest town house in London (it became the present day Lancaster House in 1912).  Here the family became the leaders of fashionable society with the Duchess organising costly parties and entertainments.