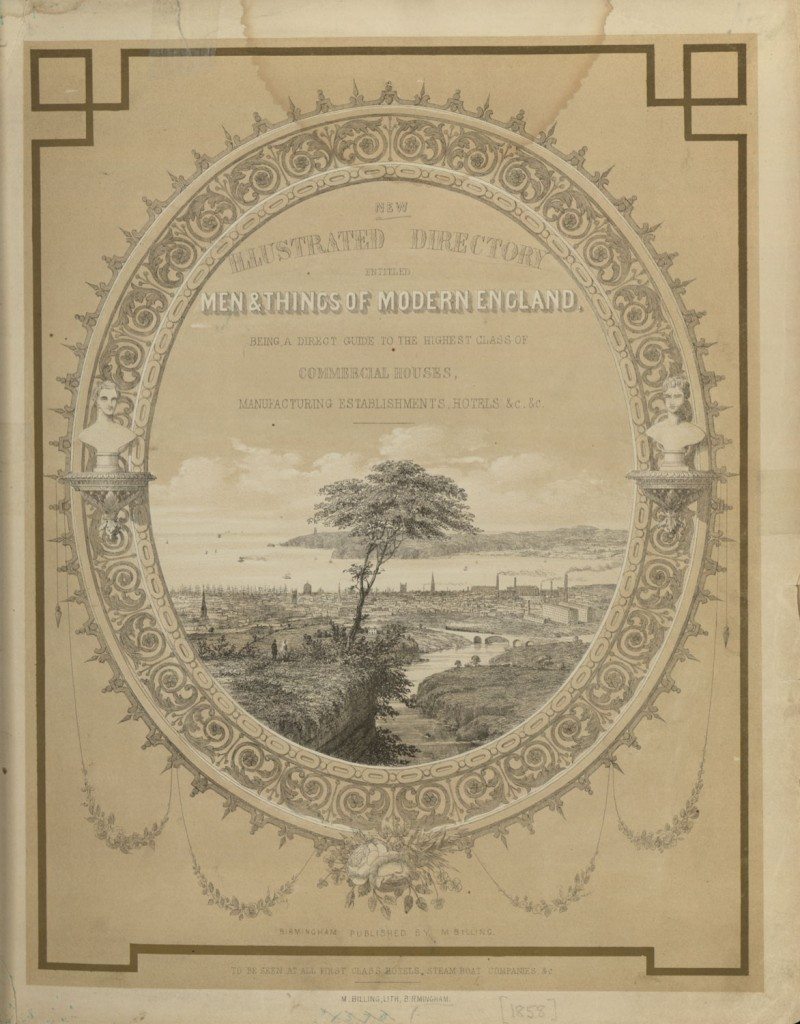 Image: The frontispiece presents an image of an imaginary industrial and commercial city. Huge factories dominate the landscape on the right. A railway bridge bisects the landscape and a train travels towards the city. In the background there is evidence of extensive commerce in a busy port full of ships. A steam vessel moves in the distance. The town is viewed by two observers. Presumably they gaze in wonder at the scene below.

In 1791, Arthur Young, the writer and commentator on British economic life described Birmingham as “the first manufacturing town in the world.” By the mid-19th century the town had other urban industrial rivals such as Manchester, but Birmingham possessed an extraordinarily varied industrial base. The “city of a thousand trades” was the world’s leading manufacturer of metal ware, but other goods were made as well. Businesses included the brass, toy, jewellery, gun and pin industries, coin and medal making, electroplating and steel-pen manufacturing. Buttons were created from a huge range of materials and Birmingham also made flint glass, papier mâché and japan ware. The 1851 census showed the large numbers of brassfounders, gunsmiths, gold and silversmiths, button makers and tool-makers who were employed in the town.

Birmingham had factories, but unlike the cotton towns of the north-west, the town was heavily dependent upon workshops and the application of factory-based steam power was slow. Boulton and Watt’s steam engines which were made in the Smethwick Foundry were not used widely in Birmingham. In 1815 there were only about 40 steam engines in the town, though by 1838 this had risen to 240. Where steam engines were used they were often small and generated power for hammering, rolling and blowing. There were thousands of small workshops which employed small numbers of workers who used hand rather than steam technology to operate presses, stamps and lathes. Evidence from the Children’s Employment Commission of 1843 provides testimony for this kind of work.

The New Illustrated Directory was published in Birmingham in 1858. It combines high-quality engravings and chromolithographs with detailed written descriptions, probably by Samuel Timmins, of Birmingham’s industrial history. It purports to be a national directory, but despite concessions to commercial and industrial premises in London, Rotherham, Bristol and elsewhere, its focus is on Birmingham and its industrial hinterland in the Black Country and Worcestershire. Illustrations include hotels, but the vast majority of images are of factories and large workshops, the businesses that were likely to afford the cost of advertisements and coloured portraits of their premises. It therefore misrepresents the nature of industrial organisation in the local workshop-based economy.

The images in the Directory promote the large family business. They provide aerial views of palatial industrial premises with an exaggerated perspective and reveal workers busily engaged in industrial and commercial activity in railway carriage works, forges, brass foundries, electroplating works and many others. Small plumes of smoke emerge artistically from tall chimneys, but there is no evidence of dirt and pollution. The book is a remarkable celebration of industrial capitalism in the 1850s.

Text: Taken from the original Directory

In issuing this volume, the Publisher desires to say a few words on its character and object. It has been felt as a serious want that, hitherto, no work has existed from the pages of which the British Public, or foreigners, could make themselves acquainted with the names of leading manufacturers in this country. The necessity for such a guide-book has long been admitted, by both commercial and by persons who transact business with them and the Publisher has much pleasure in calling attention to his “COMMERCIAL DIRECTORY”, which will he believes supply the desideratum. The work contains the announcements of the principal firms engaged in the chief branches of trade carried on in the United Kingdom and has been designed and executed on a scale calculated to ensure its preservation as a work of reference. In order to extend to Advertisers the benefit of wide publicity, copies of the work will be pleased in the hands of the leading commercial houses throughout the kingdom and others will be distributed amongst the clubs, the principal hotels and reading-rooms in this country, on the Continent, in the United States and in the British Colonies. Copies will also be placed on board vessels belonging to the chief steam-packet companies; and all other available means will be taken to ensure for the work the fullest publicity amongst the classes whom the advertisers particularly desire to reach. The Publisher calls attention to the circumstance, that although the COMMERCIAL DIRECTORY is primarily intended to be a record of business announcements, he has endeavoured to render it interesting to the public at large by adding to its portraits and biographical sketches of eminent persons and also brief notices of the history and processes of the principal trades mentioned amongst the advertisements. He is sensible that many defects will be observed in the execution of this plan; but for these and all other errors – which are inseparable from the issue of a work of this kind – he requests the indulgence of his supporters; and at the same time takes the opportunity of assuring them that in his next publication he will use his utmost exertions to prevent the occurrence of the remotest ground for complaint.

The present work has scarcely done more than open up the vast field afforded by the trade of the country for the introduction of such a volume and the Publisher desires, therefore to announce that he proposes in the course of a few months to issue another and larger Directory, on a scale much superior to the one he has now the pleasure of submitting to public notice. Arrangements for the second Directory are already in progress and the Publisher feels warranted in expressing his belief that he shall be able to produce a volume, the contents of which will be found in the highest degree useful to commercial men, both as a trustworthy collection of carefully selected business announcements and as a compendium of information valuable alike to the merchant, the manufacturer, the tradesman and the public.