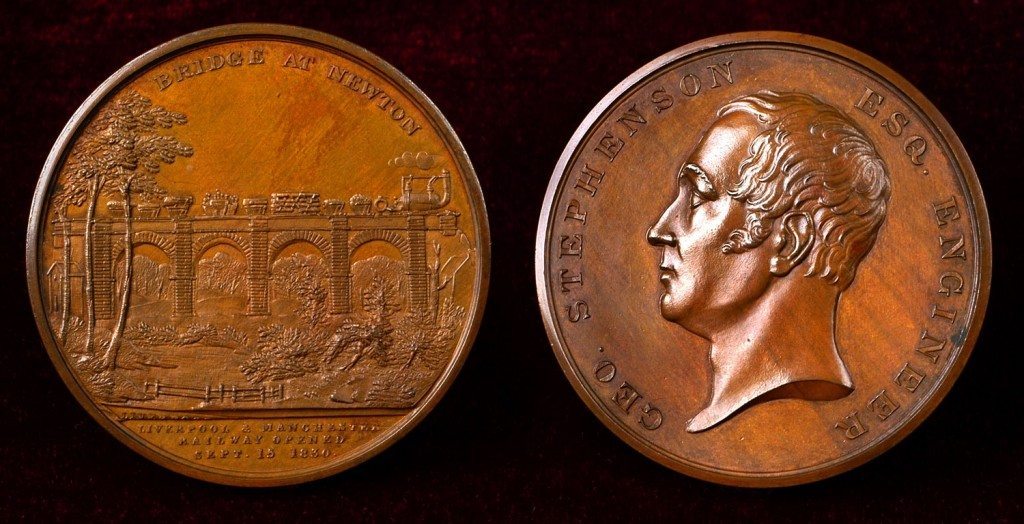 Image: Medal for the Opening of the Liverpool to Manchester Railway. The railway was one of several investment opportunities for the Leveson Gowers.

When George Granville inherited the Leveson-Gower estates in 1803 he had gained in the same year the revenues from the Bridgewater estate, averaging £77,000 per annum.  He was therefore able to increase what was spent on his tenanted property, taking greater responsibility for repairs.

From 1812 he employed the Scot, James Loch as his chief agent.  Both men have attracted criticism both at the time and since for the Highland Clearances on the Sutherland estates, in the West Midlands charity and church schools were assisted, to encourage greater literacy among the tenants.  He had been shocked by the living conditions of his Scottish tenants and they were forcibly resettled in new industries on the coast.  He was therefore held responsible for the destruction of the Highland way of life.

The English estates in the West Midlands were also improved, although not in such a drastic manner. Savings banks were set up at Trentham and Lilleshall.  In 1813 Loch introduced a cropping book to make sure crops were rotated and there were also improvements in stock breeding and ploughing.

However the trend towards larger tenant farms encouraged by Loch’s policies meant the big rich tenants became richer and small poor tenants became poorer.  The majority of those holding land under 20 acres on the Leveson-Gower estates held in fact much less than that and some were probably industrial workers employed in Ketley or Ironbridge.  Thus class and social divisions became wider and more evident.

In 1764 the 2nd Earl Gower, George Granville’s father, had set up Earl Gower and Co. to directly exploit and develop the valuable minerals – coal, lime and ironstone – found on the estates.  In 1786 the name of the company was changed to the Marquis of Stafford and Co. to reflect the new title acquired by the 2nd Earl.

The original company had half its shares owned by him, with the rest being split between his agents, the brothers Thomas and John Gilbert.  When Thomas Gilbert died in 1798 his mining rights were given to Granville Leveson-Gower, a younger son of the 2nd Earl by his third wife and half brother to George Granville.  The company changed its name to the Lilleshall Co. in 1802 and Lord Granville took new partners.  It has been estimated a quarter of the family’s revenues came from industrial sources by the early 19th century.

The Leveson-Gowers had also invested early in the building of canals and this continued under George Granville.  The 2nd Marquis doubled the number of his shares in the Trent-Mersey Canal in 1826 and held shares in the Birmingham and Liverpool Junction Canal project started that year.  He recognised the threat of the railways and invested in the Liverpool-Manchester Railway, among others in an attempt to protect his canal interests.

He also supported the new railways, investing in the Liverpool-Birmingham line, among others.

Since the death of his uncle, the Duke of Bridgewater, in 1803 he had profited from the revenues of the Bridgewater Canal. On his death in 1833 they passed to his second son Francis, who became Earl of Ellesmere, taking his grandmother’s name Egerton.  His railway interests passed to his eldest son, the 2nd Duke of Sutherland.

George Granville Leveson-Gower, the 1st Duke of Sutherland, has occupied a controversial place in history because of the policies carried out by his agent, James Loch, on his Scottish estates in Sutherland.  Thousands of crofters were evicted from their homes to achieve land improvements, although new industries were established on the coast – including fishing, fish curing and boatbuilding.  He died in July 1833 at Dunrobin Castle and was buried in Dornoch Cathedral.  In 1834 a subscription list was opened to build a monument in his memory at Golspie.  Of the 170 subscribers only 14 were from Sutherland.  Two similar monuments were built in England, one overlooking Trentham and the other, still dominating the area around Lilleshall Hill, in 1839.  The latter carries as its inscription a kinder verdict:

To the memory of George Granville Leveson Gower, K.G. 1st Duke of Sutherland.  The most just and generous of landlords.  This monument is erected by the occupiers of his Grace’s Shropshire farms as a public testimony that he went down to his grave with the blessings of his tenants on his head and left behind him upon his estates the best inheritance which a gentleman of England can bequeath to his son; men ready to stand by his house, heart and hand.