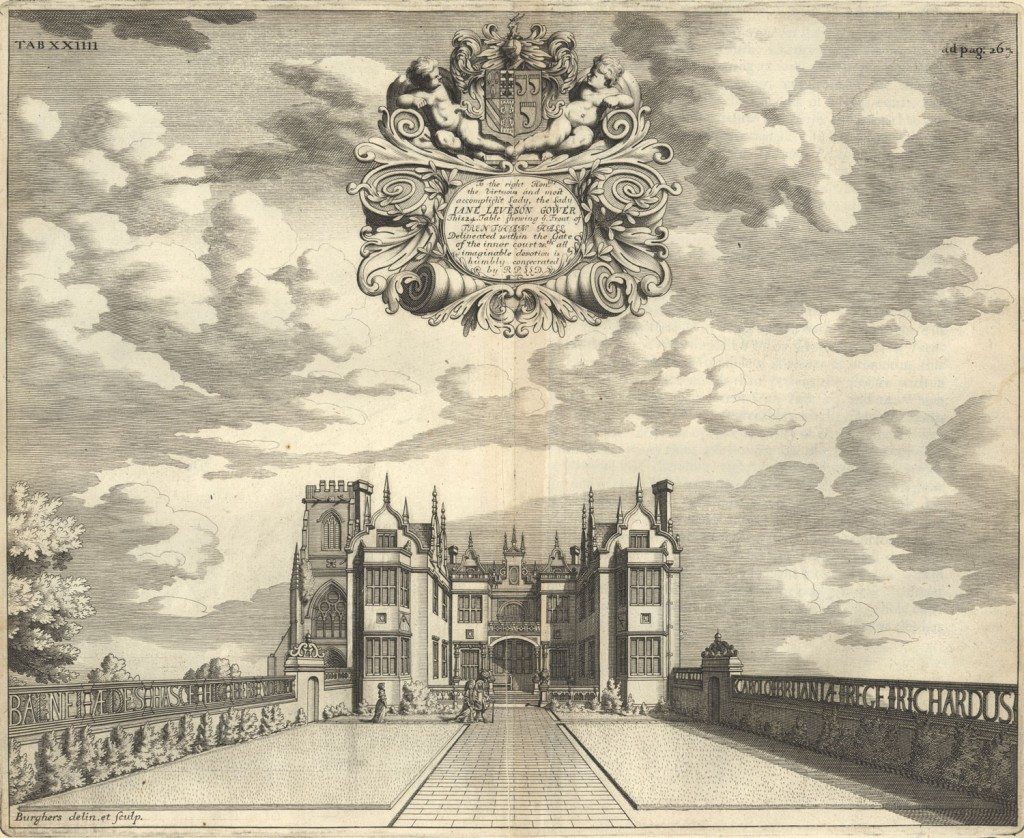 Image: Trentham Hall, Staffordshire, engraved by M Burghers. Robert Plot, The Natural History of Staffordshire (Oxford, 1686). The hall served as the main residence for the Leveson Gowers in the 18th century.

Granville Leveson-Gower, the third son of John, 2nd Baron and the 1st Earl Gower, became a major player in the social, economic and political life of not just the West Midlands, but the country as a whole. Already a great landowner with estates in Shropshire (Lilleshall), Staffordshire (Trentham) and Yorkshire (Stittenham), he continued the family tradition of marrying heiresses. His marriage to his 2nd wife, Lady Louisa Egerton, favourite sister of the heirless Duke of Bridgewater, subsequently brought the family the wealth created by the Bridgewater Canal.

The 2nd Earl Gower, who succeeded his father in 1754, was also connected by marriage to the Duke of Bedford and the Earls of Galloway and Carlisle. He was thus part of the landed oligarchy who ruled England in the 18th century and himself had an important political career becoming Lord Privy Seal and President of the Council. George III made him the Marquis of Stafford in 1786 as a reward for political services. Earl Gower was also an entrepreneur, contributing to the rise of modern industry within the West Midlands. In 1758 he employed James Brindley to survey a proposed canal between the Trent and the Mersey and provided some of the loan capital for the Bridgewater canal, the first to be built in 18th century England. He played a leading role in the building of the Trent and Mersey Canal, allowing Trentham Hall to be used for meetings of landowners and industrialists. On his own estates and wider, Earl Gower encouraged industrial development. In 1764 Earl Gower and Company was formed which constructed the Donnington Wood Canal on his Lilleshall estate, bringing together its coal, lime and ironstone resources. By the time of his death in 1803 the Leveson Gower family was one of the richest and most influential in England.

The Gowers had owned land in Yorkshire since the Norman Conquest. In 1620 Sir Thomas Gower gained a baronetcy from James I.

The Levesons were a Staffordshire family, owning land at Bilston and Wolverhampton, who had gained great wealth from the 16th century wool trade. They were therefore able to buy land from Henry VIII at the time of the Dissolution of the Monasteries. Trentham, their main landed seat, had been an Augustinian Priory. They also bought land at Lilleshall Abbey, Stone Priory and Wombridge Priory.

Sir Thomas Gower married Francis Leveson in 1631 and their properties joined in the person of their son, Sir William Leveson-Gower (1636-1691).

Granville Leveson-Gower (1721-1803) inherited what Disraeli was later to call a talent for “absorbing heiresses”. His first wife, Elizabeth Fazackerley, was the daughter of a rich merchant from Prescot, Lancashire and brought a dowry of £20,000. His second, Louisa Egerton, daughter of Scroop, first Duke of Bridgewater, had a dowry of £10,000 but this marriage was to prove the most lucrative to the family. She was the favourite sister of the second Duke of Bridgewater who remained close to Earl Gower, despite Louisa’s death in 1761. When he died childless in 1803 his complicated will left the profits of the Bridgewater Canal to Lord Stafford’s (Earl Gower became Marquis of Stafford in 1786) eldest son, George Granville Leveson Gower, the future first Duke of Sutherland.

Until 1830 the Leveson Gower family used a half-timbered manor house, known as Lilleshall Lodge, as a country retreat and shooting lodge. Their main seat was Trentham Hall, near the Potteries in Staffordshire. It was here where James Brindley came to the notice of the Earl’s agent John Gilbert, having built the cascade at the foot of Trentham Lake. He subsequently became the consulting engineer for the Bridgewater Canal.