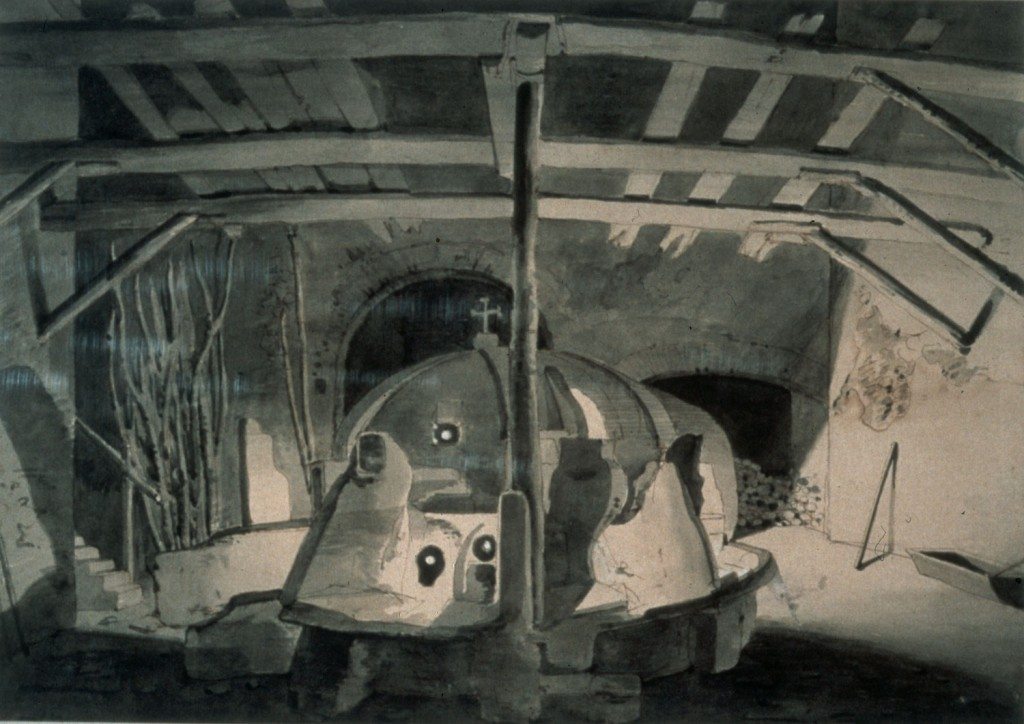 This is one of two surviving images of the inside of glass houses which Wright produced in the early 1770s. Glass was one of several industries to experience significant growth in the late eighteenth century Midlands. The Black Country in Northeast Worcestershire and South Staffordshire was an important glass making district where glass kilns were constructed to produce crown glass for windows and flint glass for household ware and ornamental objects.

This image of Wright’s is probably the picture described as “The Glass-House, a Sketch: the Fire Exceedingly well expressed” which was sold by Christies in 1801 after Wright’s death. David Fraser in Joseph Wright of Derby (Derby Art Gallery, 1979) suggests that this and the other picture held by Derby Museum and Art Gallery may have been composed in one of the glass factories established by a member of the Lunar Society member, James Keir .  .

In 1771 Keir had leased the Holloway End Glasshouse, close to Stourbridge, near Dudley in the Black Country. According to a letter held in the Boulton and Watt Papers in Birmingham City Archives, from his fellow Lunar Society member, William Small to James Watt on 16 December 1771, Keir made flint glass, which was blown to make glassware pieces. Keir also used his glass furnaces as laboratories to carry out experiments on the properties of alkalis. In a letter to Matthew Boulton on 22 October 1772, he referred to his ‘chemical operations in an old glass-house’. Keir also experimented with annealing, the slow cooling of vitreous materials such as glass to try and remove imperfections in the finished materials. Both Keir and Josiah Wedgwood co-operated in this branch of applied science. In 1776, Keir delivered a paper on this subject to London’s Royal Society.

Wright’s picture is an important study of the inside of a glass factory, but there is no evidence that Wright used the image, or the other example held at Derby, as the basis for a colourful painting to present his characteristic contrast between light and shade. The sketch, though, hints at the religious symbolism which appears in several of his paintings. Wright places the cross-shaped window at the rear of the glass house in such a way that it looks like a crucifix on top of the furnace, A similar image on a grander scale is represented by the interplay of vertical and horizontal beams; a crucifixion without Christ.