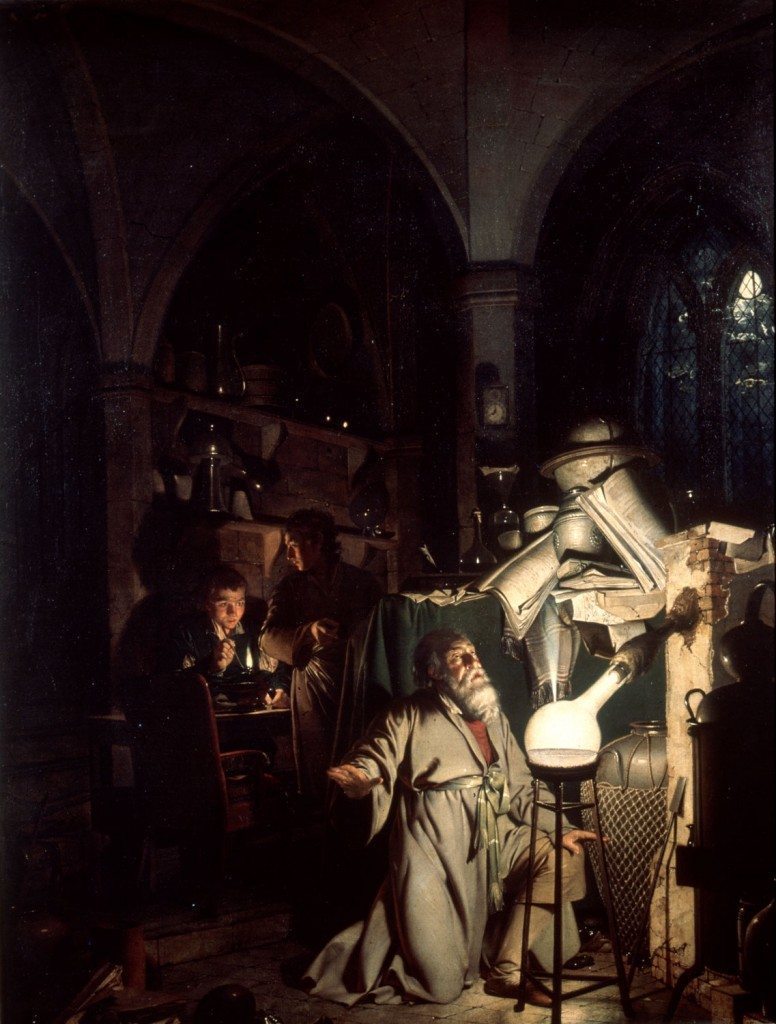 “The Alchymist” is a complicated work. Since its exhibition in 1771, it has provoked many contradictory interpretations. Its mystery obviously disturbed 18th century viewers, and the painting was not sold at exhibition. It travelled with Wright to Italy in 1773-1775, came back to England, was reworked in 1795, but still was not sold until four years after Wright’s death.

Its full title “The Alchymist, in Search of the Philosopher’s Stone, Discovers Phosphorus, and prays for the successful Conclusion of his operation, as was the custom of the Ancient Chymical Astrologers” explains the subject. It was suggested that “The Alchymist” refers to discovery of phosphorus by the Hamburg alchemist Hennig Brandt in 1669. The story was often printed in popular chemical books and was widely known. It was also described in   Elements of the Theory and Practice of Chemistry by the French scholar P-J. Macquer (1718-1784). Wright could have found more about it through his friend and member of the Lunar Society James Keir, who at that time was translating Macquer’s Dictionary of Chemistry into English (1771).

However, Wright does not identify the alchymist as Brandt. He situates the alchymist not in a 17th century background, but in a striking medieval stone room with gothic arches and high, pointed windows. The alchymist kneels in front of a brilliantly shining vessel of dazzling light.

Wright was not the first or the only artist to depict alchymical practitioners. They appear in seventeenth-century Dutch paintings, often as subjects of ridicule. Their laboratories are shown in a state of chaos, and their bizarre experiments ending in disaster. (Although at Chatsworth there is “An Alchymist” by D.Teniers the Younger (1610-1690) where the hero is shown in serious and respectful way). Wright’s treatment of instruments, glass vessels and books also refers to serious study. They are rather reminiscent of the idealised engravings in Diderot’s Encyclopedie, or in the Macquer’s book. The pieces of apparatus are those that were used in contemporary chemistry by his Lunar acquaintances.

Despite its alchemical disguise, the painting refers the viewer to contemporary philosophy and science, and is not a jest. Wright’s image does not depict the rational scientific research typical of the Age of Reason, but something which is clearly a non-theory-related and irrational. In his painting, the phosphorus has not been created as the result of scientific calculation, but appears in a miraculous way. Such an experience did not correspond with Wright’s contemporaries’ definition of chemical research, which Macquer described as ‘a Practical Treatise, intended to contain the manner of performing the principal Operations of Chymistry; the operations which serve as standards for regulating all the rest, and which confirm the fundamental truths laid down in the Theory.’

The dignified clarity of “The Orrery” allows no room for superstition. “The Air Pump” conveys dismay, doubt and fear. ‘The Alchymist’ with its hero kneeling down in front of an inexplicable magical light denies the rational theories of the Age of Reason. The contents of the painting do not correspond with the enlightened idea of a knowable and explicable universe, and may have alarmed Wright’s contemporaries. If we remember that the common name for Phosphorus was the ‘Devil’s element’, it might open other possibilities for a further interpretation of Wright’s masterpiece.