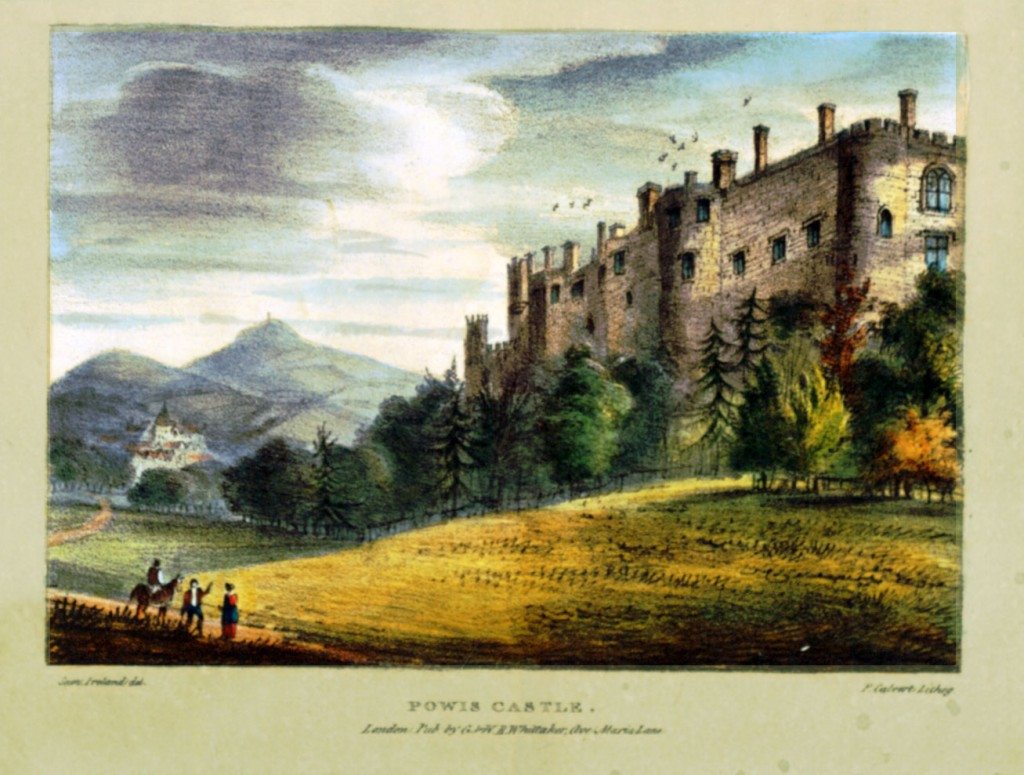 “The situation of the old castle is imposing, and the views which it commands are magnificently grand….Beneath are stretched the vales of Montgomery and Shrewsbury, though which the placid waters of the Severn most beautifully meander, apparently interrupted at intervals by green and fertile meadows….in the distance are seen the Wrekin, in a conical form, rising solitary amid the vale of Salop; to the south the extensive chain of the Frieden Hills, with the summit of Snowdon; and westward, the colossal Cader Idris terminating the sublime prospect.

At this time (1823) the entire building is undergoing a thorough repair, with extensive improvements on a tasteful and judicious plan, under the direction of its noble owner, Viscount Clive. The old castle, of red stone, forms the greatest part of his lordship’s mansion. The grand entrance, from the south, is through an ancient gateway, between two massy round turrets….These entrance turrets have, under the improvements which are now going forward have been Grecianized.

The park, containing spacious and verdant lawns, diversified with swelling hills, was, in ancient times, enriched with extensive and finely wooded plantations….For many years, the castle and grounds had been suffered to fall into a state of decay; the pride and ornament of the park had been felled for the value of the timber; and, but for the recent determination to restore its pristine glory, the beauty of Powis would, at no very remote period, exist only in the recollections of the past…

The neatly built town of Welchpool stands about a mile below Powis Castle….The town is large, and, although somewhat irregular in its plan, it is well built…The Montgomeryshire canal, which passes by the town, has caused many new houses, chiefly of brick and covered with slate to be erected in the last few years….The chief manufactures carried on here are those of flannel, called gwart, or webb, and coarse woollen goods, such as are used for soldiers clothing. These are purchased to a great extent, mostly for ready money, by the Liverpool and Shrewsbury dealers. With an increasing population of 3,500, the place has altogether an air of great opulence and comfort.”

« Previous in this sectionNext in this section »
People: Browse
Image creators: Thomas Harral, Picturesque Views of the Severn, 1824
Image courtesy of: Shropshire Records and Research