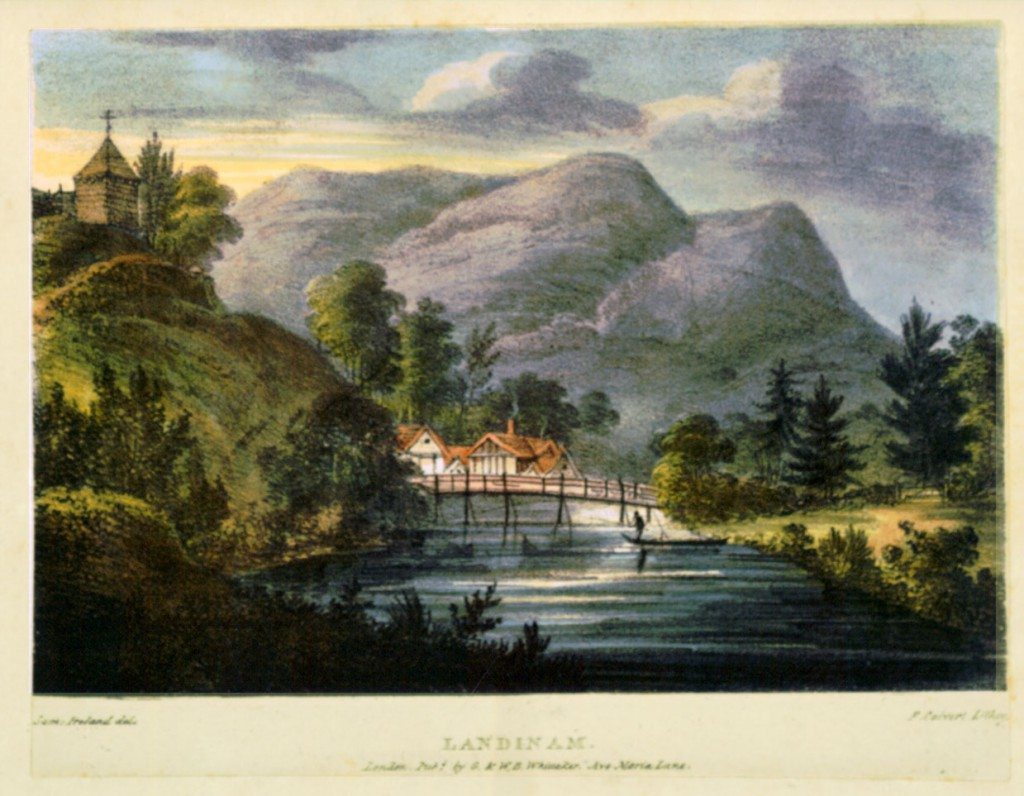 “The Severn, combining with the rich and hilly country through which it flows, here forms a beautiful and characteristic landscape…. On the banks of the stream here, are a few scattered mills for the purpose of spinning woollen thread. The domestic manufacture of flannels, by the farmers and cottagers, extends through this vale from Llanidloes… In the descent …one unvaried expanse of smiling cultivation presents itself on either margin….”

This Journey down the Severn, selects from Harral’s material to explore the experiences of an observant early 19th traveller, following the route of the river. Using engravings based on images by Samuel lreland (d.1800) who travelled the Severn in the 1790s, Harral notes how the mountains of Wales give way to fertile soil and sheep farming, whilst the banks of the river show increasing evidence of human settlement, bridge building, industry and commerce. The route passes through growing towns, such as Montgomery, Shrewsbury and Stourport, as Harral describes local history, architecture and economic activity. Alongside the attractions of nature, he notes the contributions of landowners, engineers and entrepreneurs to the shaping of the Shropshire landscape. Women and workers are absent from his record.

Next in this section »
People: Browse
Text by: Malcolm Dick

Gloucester’s Economy and the Severn Trade Sources and Further Reading Harral, Thomas, Picturesque Views of the Severn with Historical and Topographical Illustrations by Thomas Harral. The Embellishments from Designs by the late Samuel Ireland. vol.1 and vol. 2, (London, G and W B Whittaker, 1824). Jeremiah, Josephine, The River Severn: a Pictorial History from Shrewsbury to Gloucester (Chichester, Phillimore, 1998). Morris, Richard K, The Shropshire Severn (Shropshire Books, n.d.). Trinder, Barrie, “The most Extraordinary District in the World” Ironbridge and Coalbrookdale. An anthology of visitors’ impressions of Ironbridge, Coalbrookdale and the Shropshire coalfield, Second Edition, (Chichester, Phillimore, 1988).
Most read
Chronology of principal events that occurred during the Industrial Revolution in the West Midlands. Significant places in the historic counties of Derbyshire, Herefordshire, Shropshire, Staffordshire, Worcestershire and Warwickshire during the Industrial Revolution. Industrialists, engineers, artists, thinkers and writers who contributed to the Industrial Enlightenment, technology, art, culture, religion and politics. Explorations of industries and innovations; landscapes and localities; art and architecture; culture and diversity; and the place of the West Midlands in the contemporary world.
Revolutionary Players was developed between 2002 and 2004 and financed by the New Opportunities Fund. Revolutionary Players was created by Dr Malcolm Dick & Dr Kate Iles and managed by Birmingham Museums until 2015. Revolutionary Players is now published and funded by History West Midlands.