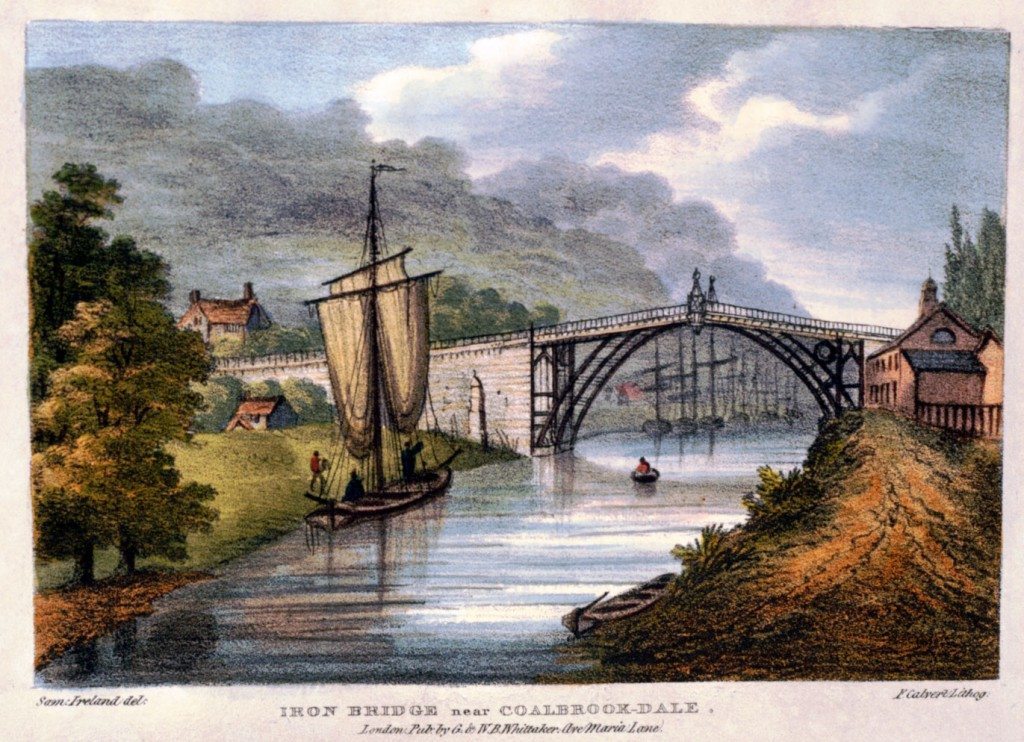 Image: The Iron Bridge, near Coalbrookdale Shropshire. Harral’s description is largely based on the account provided by Samuel Ireland when he visited the area in the 1790s.

“Having left The Birches….the river passes by the opening of Coalbrook Dale, a district which has long been famous for its coal and iron-work, and flows between the opposing summits of Benthall Edge and Lincon (Lincoln) Hill under an iron bridge, the first and perhaps the most beautiful of its kind, ever constructed.

Coalbrook Dale is accurately described, by Mr Young, as “a winding glen, between two immense hills, which break into various forms, being all thickly covered, and forming most beautiful sheets of hanging woods….The combination of coal, iron ore, and lime in these parts, is very remarkable; and it is to that combination, united with the advantage of water carriage, that Coalbrook Dale is indebted for becoming the centre of the most extensive iron-works in the kingdom.

On his arrival at Coalbrook Dale, Mr Ireland (the artist who created the images on which the engraving is based)…was most obligingly allowed to view…the extraordinary wonders of the place:

The noise of the forges, mills, etc., with all their vast machinery; the flames bursting from the furnaces, with the burning of coal, and the smoke of the lime-kilns, were, as Young observes, altogether horribly sublime.” Proceeding along the vale, a succession of volcanic eruptions seemed to flash upon the sight in every direction, from the furnaces which are incessantly employed in smelting iron ore. These eruptions – these flaming apertures, projecting huge columns of intermingled fire and smoke into a dense atmosphere, with here and there a group of gaunt, sooty labourers, like demons of a lower world – produced an effect the most wild, unearthly, and appalling that can be imagined. Perhaps no association of terrene objects could impress upon the mind so vivid an idea of those realms where “hope never comes” as the iron-works at Coalbrook Dale, thus witnessed at midnight.

Having been invited to see the opening of one of the furnaces – an operation very rarely witnessed by strangers – Mr Ireland repaired on the following day to the appointed spot. The immense furnace stood in the centre of a large area walled around, communicating with each side of which was a colossal pair of bellows, whose alternate blasts, with a noise like the incessant roaring of heavy ordnance, excited an intense heat, which had been kept up, night and day, for a considerable time, to separate the metal from the stone, and to reduce it into a state of fusion. The aperture whence the fused iron was to flow, was guarded only by some clay and sand, constantly kept moist by the application of water. Preparatory to the opening of the furnace, a channel of damp sand was formed, from its mouth to a large circular basin of the same material, into which, on its liberation, the burning fluid impetuously rushed. On a wide surrounding space, were numerous moulds, in sand, for the fronts of stoves and other articles. Into these the fluid iron was poured, from ladles with very long handles, carried by athletic workmen, who filled these utensils from the great circular reservoir. So intense was the heat of the metal, that the moment the ladles, though very thick and ponderous, were dipped into it, they became red hot, far above the bowl. Indeed, were it not for that the labourers were supplied with gloves, so constructed as to protect them from the violence of the heat, even at the upper part of the ladle-hafts, it would be impossible for them to perform their work.

The celebrated bridge at Coalbrook Dale was cast upon the spot, in the year 1778, and erected in the course of 1779-80. It occupies the site of an ancient horse ferry between Madeley and Benthall, in the most public road from Shrewsbury to Bridgenorth (sic). The bridge is composed of a single arch, the expansion of which within is one hundred feet six inches, and its height forty feet. Thus, with the altitude of the walls upon which it is supported, the bridge rises more than fifty-five feet above the surface of the water. The road-way, formed of clay and iron slag, a foot in depth, is twenty-four feet in width, and its entire length is about three-hundred feet. The whole of the bridge is covered with iron top-plates, projecting over the ribs on each side; and, on the projection, stands the balustrade, which is also of cast iron. The weight of metal employed in this structure is 378 tons and a half; each piece of the long ribs weighing five tons and three quarters. On the largest, or exterior rib, is inscribed, in capitals –

“THIS BRIDGE WAS CAST AT COALBROOK,

All the principal parts of the bridge were erected in the course of three months, without obstructing the navigation of the river, and without accident to the workmen.

« Previous in this sectionNext in this section »
People: Browse
Place: Coalbrookdale  |  Ironbridge
Image creators: Image from Thomas Harral, Picturesque Views of the Severn, 1824.
Image courtesy of: Shropshire Records and Research