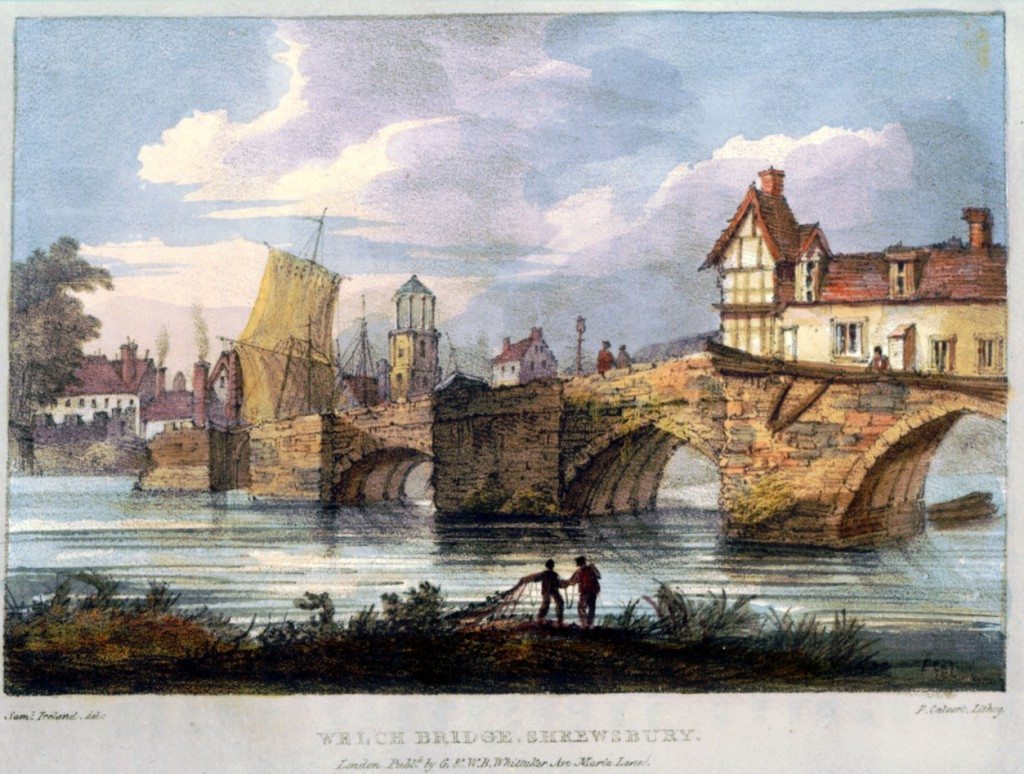 Image: Welch Bridge, Shrewsbury. Like the New or English Bridge, the new Welsh Bridge, which replaced the structure shown in the engraving, provided further evidence of economic growth in the town. It enabled a commercial bottleneck, close to Shrewsbury’s main port area, the Mardol, to be reduced. The bridge was designed by John Carline and John Tilley and built between 1793 and 1795.

“The old Welch bridge, represented…, was anciently regarded as the chief architectural ornament of Shrewsbury. It consisted of seven arches; its extremities were protected by fine castellated gates; and it consisted…one of the most important defences of the town….It was not long after the demolition of the fine gate at the opposite end of the bridge itself had fallen so far to decay as to render its removal necessary. On taking down the gates, the tolls, arising from the transit of marketable goods, were abolished by the payment of £6,000, raised by public subscription, to the corporation. A further sum of £8,000 was then required for the purpose of rebuilding the bridge. Another subscription produced £4,000, and the corporation advanced £4,000; and thus the new structure, which is at once convenient, substantial, and ornamental, was completed in the year 1795….The approaches from the Welch side of the Severn, in the suburb of Frankwell, are steep, narrow, dirty and irregular; evils for which a remedy will probably be found in the projected improvements. A quay, faced with stone, and occupied with warehouses, connects the bridge with the town at the end of Mardol Street.”

« Previous in this sectionNext in this section »
People: Browse
Place: Shrewsbury
Image creators: Image from Thomas Harral, Picturesque Views of the Severn, 1824.
Image courtesy of: Shropshire Records and Research