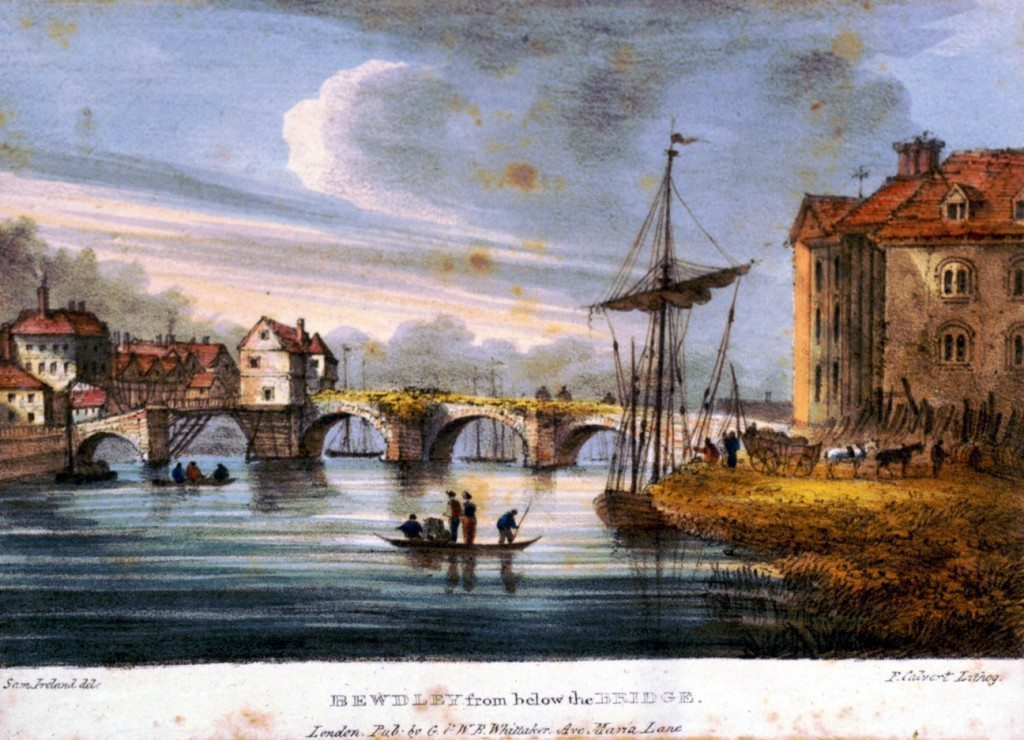 Image: Bewdley, Worcestershire, from below the Bridge. Bewdley was the most important port for the West Midlands in the 17th and 18th centuries, serving Birmingham and the Black Country until the opening of the Staffordshire and Worcestershire Canal in 1771. It also had a long history of manufacturing, but many of its trades declined after 1700. Nevertheless, Bewdley, the Wyre Forest and nearby townships such as Dowles and Wribbenhall remained as industrial centres into the 19th century, producing charcoal, rope, pewter and brass goods as well as the products described by Harral.

“Within a mile of Bewdley, and just below the parish of Dowles, Dowles Brook pours its waters into the Severn through the western bank. In this neighbourhood are Skey’s clay-works, and Skey’s oil-of-vitriol works.

The houses in Bewdley, like those of most other old towns, were originally timber, or of timber or plaster; but, of late years, most of the wooden buildings have been superseded by more secure and permanent structures of brick; and at this time, the principal streets are as well built and paved as those of any other provincial town.

The bridge over the Severn, mentioned by Leland, is believed to have been erected by Edward VI….It is this building which is represented in the View of Bewdley Bridge. On the western pier of the centre arch, is seen a wooden gatehouse, the end of which, towards the north, served as a residence for the toll-gatherer, whilst that towards the south, commonly called the Bridge-House, was used as the corporation prison.

Since this view was taken, the old bridge has been replaced by a new structure, of elegant proportions, exhibiting a light and graceful appearance, superior even to that of Worcester. The sides are at once protected and embellished by balustrades.

The navigation of the Severn here presents a very busy appearance; and it is the boast of the inhabitants, that their trows and their sailors are the best upon the river. On each side of the stream, are extensive and commodious wharfs. It is said, that the people opposed the intention of making the Staffordshire canal communicate with the Severn at this place. In consequence of their opposition, the canal was carried on from Kidderminster to Stourport; a circumstance which tended greatly to increase the trade of the latter town.

The tanning of leather has long been an established and lucrative business in this town; and, in former periods, Bewdley was distinguished for its extensive sailors’ caps, generally denominated Monmouth caps. This once flourishing occupation, however, has been nearly destroyed by the almost universal adoption of Beaver and silk hats. Formerly also, as is evident from the many traces of malt-houses that occur, a great trade must have been carried on here in malt. The working of horn has for a number of years, given employment to a considerable proportion of the industrious poor. A flannel manufactory of recent origin, was established in the town by subscription, for the purpose of employing the aged and infirm. Bewdley may be considered as the emporium for the smaller neighbouring towns.

Soon after leaving Bewdley, Mr Ireland (the engraver, who visited in the 1790s) was struck by the appearance of a barge, carrying about thirty tons, which had been built by Mr John Wilkinson, five years before. Cased with iron plates, about a quarter of an inch thick, she did not draw, when unladen more than nine inches water. The shrouds, stays and blocks, originally of iron, had been exchanged for others of rope and wood. This barge, he was informed, answered every purpose extremely well.”

« Previous in this sectionNext in this section »
People: Browse
Place: Bewdley  |  Worcestershire
Image creators: Image from Thomas Harral, Picturesque Views of the Severn, 1824.
Image courtesy of: Shropshire Records and Research