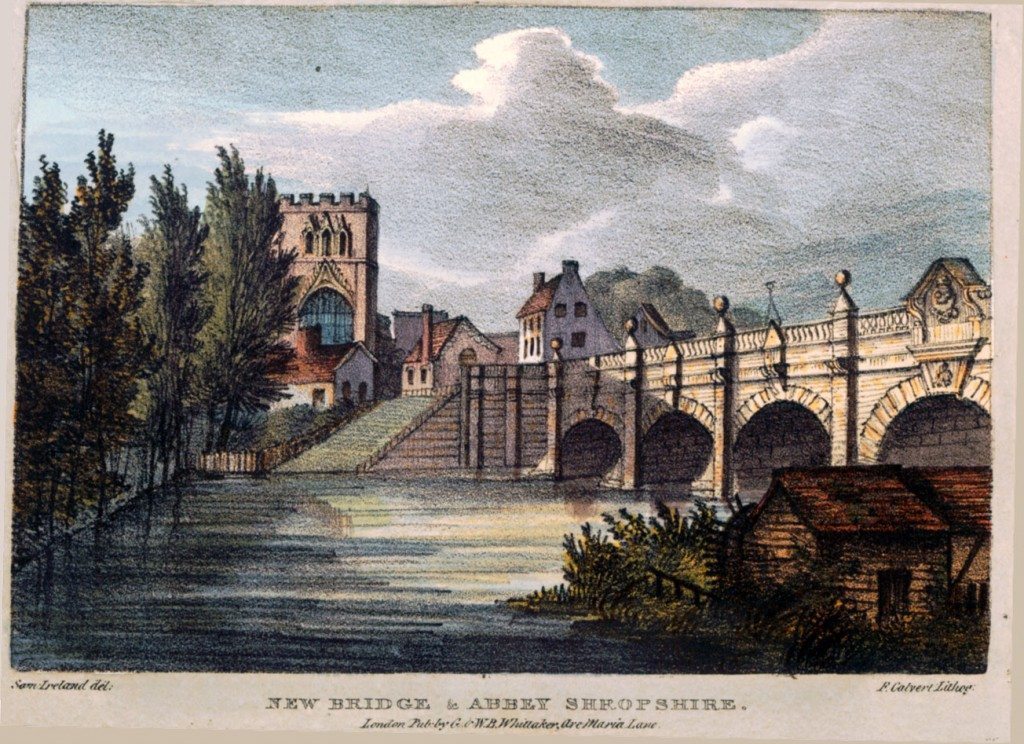 Image: New Bridge and Abbey, Shrewsbury. Designed by John Gwynn, the New Bridge or English Bridge was evidence of Shrewsbury’s participation in the economic growth of the late 18 century. Between 1925 and 1927, it was remodelled and the steep gradient was reduced.

“The original east bridge, which passed over the Severn towards the London road….consisted of no fewer than seventeen arches, varying considerably in their style and dimensions….nearly the whole of its northern side was occupied by houses, which reduced the actual width of the bridge to twelve feet. In the year 1765 a subscription was entered into for repairing, widening, and improving the bridge…The subscription, however, proved so liberal, that, notwithstanding some progress had been made in the intended alterations, it was determined to pull the old building down, and to erect a new one. In pursuance of this spirited determination, Mr Gwyn (sic), a native of the town, was employed to furnish a design…and what is now termed the New Bridge, is justly regarded as one of the finest ornaments of Shrewsbury. Its entire length is four hundred feet; it has a handsome balustrade on each side; and the breadth between the balustrades is twenty-five feet. The arches, seven in number, are semicircular. To allow a free passage to the frequent floods of the Severn, the architect found himself under the necessity of giving a quicker curve to the bridge than the eye of taste or a sense of safety or comfort could justify. The central arch is sixty feet in width, and forty feet in height, and thirty-five in width. The material employed in the bridge was the fine stone of Grinshill quarry.”

« Previous in this sectionNext in this section »
People: Browse
Place: Shrewsbury
Image creators: Image from Thomas Harral, Picturesque Views of the Severn, 1824
Image courtesy of: Shropshire Records and Research