Home·Browse·Poetry and Visions of the River Severn 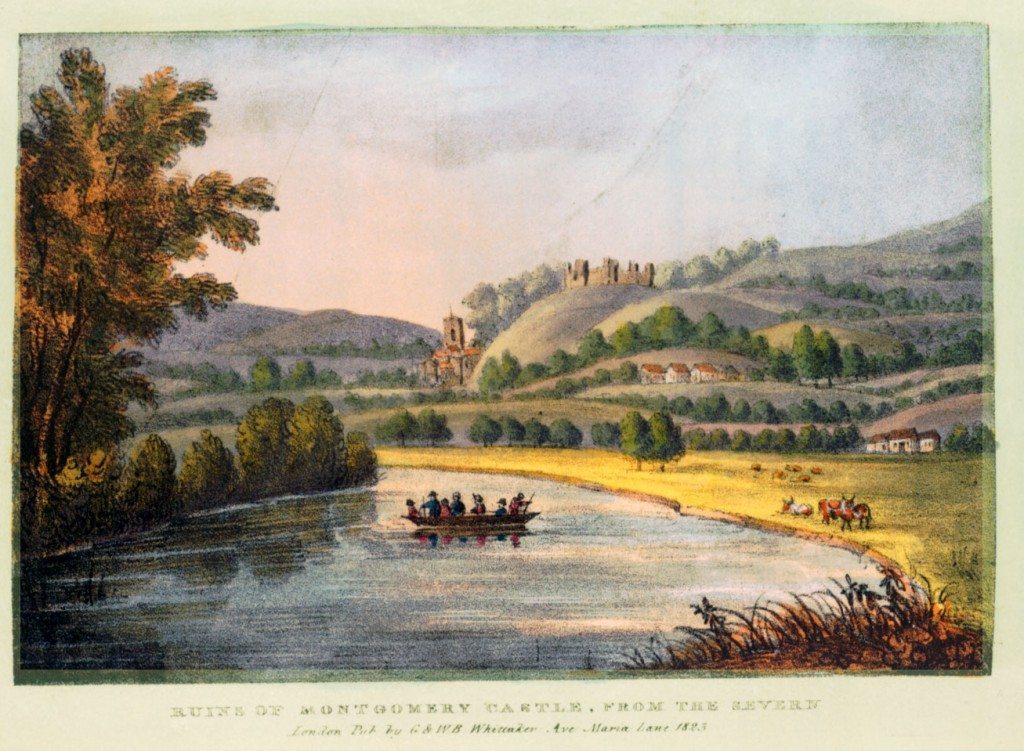 Image: Ruins of Montgomery Castle from the Severn. This is one of the most picturesque of Harral’s views, a portrayal which is consistent with Milton’s pastoral vision of the river in Comus.

Visitors to the river were entranced by its beauty. John Milton in his masque, Comus, which was first performed at Shropshire’s Ludlow Castle in 1634, personified the Severn in verse:

There is a gentle nymph not farre from hence
That with moist curb sways the smooth Severn stream,
Sabrina is her name, a virgin pure….
Made goddesse of the river; still she retaines
Her maiden gentlenesse, and oft at eve
Visits the heards along the twilight meadows;
Helping all urchin blasts and ill lucke signes
That the shrewd medling ele delights to make,
Which she with precious violed liquors heals;
For which the shepheards at their festivalls
Caroll her goodnesse lowd in rusticke layes,
And throw sweet garland wreaths into her streame
Of pancies, pinks, and gaudie daffadills.

In 1785, the Severn attracted another visitor, Anna Seward. Her poem, Colebrook Dale transformed Milton’s pastoral vision into a scene of industrial rape:

Scene of superfluous grace, and wasted bloom,
O, violated Colebrook! in an hour,
To beauty unpropitious and to song,
The Genius of thy shades…
Slumbers! – while tribes fuliginous invade
The soft, romantic, consecrated scenes;
Haunt of the wood-nymph, who with airy step,
In times long vanish’d, through thy pathless groves
Rang’d; – while the pearly-wristed Naiads lean’d,
Braiding their light locks o’er thy crystal flood,
Shadowy and smooth.  What, though to vulgar eye
Invisible, yet oft the lucid gaze
Of the rapt Bard, in every dell and glade
Beheld them wander; – saw, from the clear wave
Emerging, all the watry sisters rise,
Weaving the aqueous lily, and the flag,
In wreaths fantastic, for the tresses bright
Of amber-hair’d SABRINA. – Now we view
Their fresh, their fragrant, and their silent reign
Usurpt by Cyclops; – hear, in mingled tones,
Shout their throng’d barge, their pond’rous engines clang
Through thy coy dales; while red the countless fires,
With umber’d flames, bicker on all thy hills,
Dark’ning the Summer’s sun with columns large
Of thick, sulphureous smoke, which spread, like palls,
That screen the dead, upon the sylvan robe
Of thy aspiring rocks; pollute thy gales,
And stain thy glassy waters.

Anna Seward, Colebrook Dale, c. 1785 (see the website and Digital Library for a full version of the poem).

Seward’s poem is important; it was one of the first commentaries on the polluting effects of industry upon landscape at a time when the application of technology and the exploitation of nature were generally portrayed as progress. Erasmus Darwin’s Botanic Garden for example, celebrates industrial achievement in verse. In time the Severn became a tourist attraction, not just for what remained of its natural beauties, but for its record of industrial activity. Harral’s Picturesque Views… describes the factories, forges and foundries along the river’s bank. His description of Coalbrookdale, based on Samuel Ireland’s words, presents an awesome picture of the industrial energy of the place. Elsewhere his picture of industry is more factual.