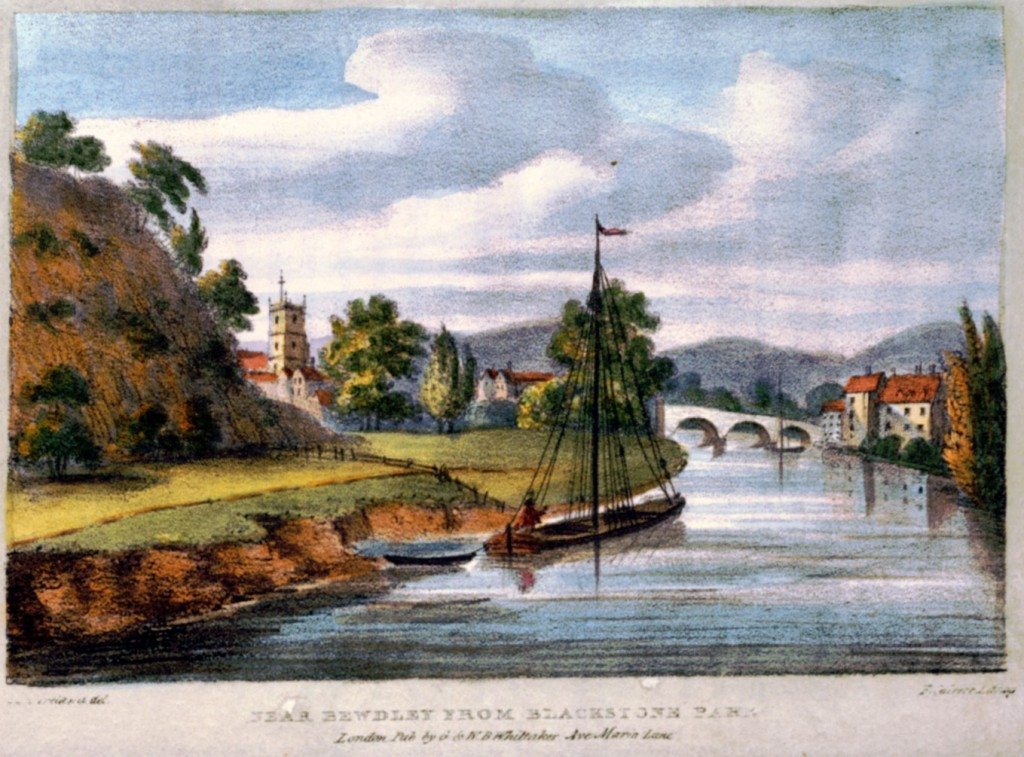 Image: Near Bewdley, Worcestershire from Blackstone Park. The natural attractions of this part of the Severn brought tourists to the area in the 18th and 19th centuries. Nearby Spring Grove House, built by the local chemical manufacturer, Samuel Skey, between 1787 and 1790. In the late 20th century, it became part of another tourist attraction; Spring Grove House lies within the grounds of the West Midlands Safari Park.

“Eastward from the footbridge, is a little hamlet with a chapel called the Foreign of Kidderminster; close to which is Spring Grove, seat of the late Jonathan Skey Esq and now (we believe) of John Taylor Esq. “The House is a large white building, situated in a park, the north wall of which is skirted by the road to Kidderminster. Spring Grove forms a pleasing object in the scenery, and the views which it commands are very fine”

The late S. Skey, Esq. introduced a useful breed of mules, for agricultural purposes as well as for the saddle, into this part of the country. They were produced from grey, or white, mares, and a white spotted foreign ass. Some of the more beautiful, nearly milk-white, were reserved for Mr Skey’s carriage. All the farm work upon the estate – a light sandy soil – was performed by this race of mules.

On the western side of Bewdley, in a commanding situation, are the park and mansion of Ticken Hill….Here the view is singularly wild, romantic and delightful. The forest of Wyre, famous in past ages for the abundance and superior quality of its timber, has long been robbed of nearly all its verdant glory. Still, however, it forms a large nursery for oak poles and underwood, with here and there a timber tree in reserve.

About a mile below the town, from that part of the river which is seen in the plate entitled “Near Bewdley, from Blackstone Park,” the town, with its bridge, and Ribbesford church, are seen to great advantage. Here, on the eastern bank of the stream, rises a lofty wood-clothed range of cliffs, denominated Blackstone Rocks. The shrubs, shooting from the fissures and interstices of the rocks, spread forth their wild and verdant branches in every direction, forming gay festoons, and sweetly recessed arbours, in every fantastic variety that imagination can conceive. The contrast, thus produced, with the extended plain which lies beneath the cliffs of Wynterdine and Ribbesford, on the western bank, is eminently and beautifully picturesque.”

« Previous in this sectionNext in this section »
People: Browse
Place: Bewdley  |  Worcestershire
Image creators: Image from Thomas Harral, Picturesque Views of the Severn, 1824.
Image courtesy of: Shropshire Records and Research