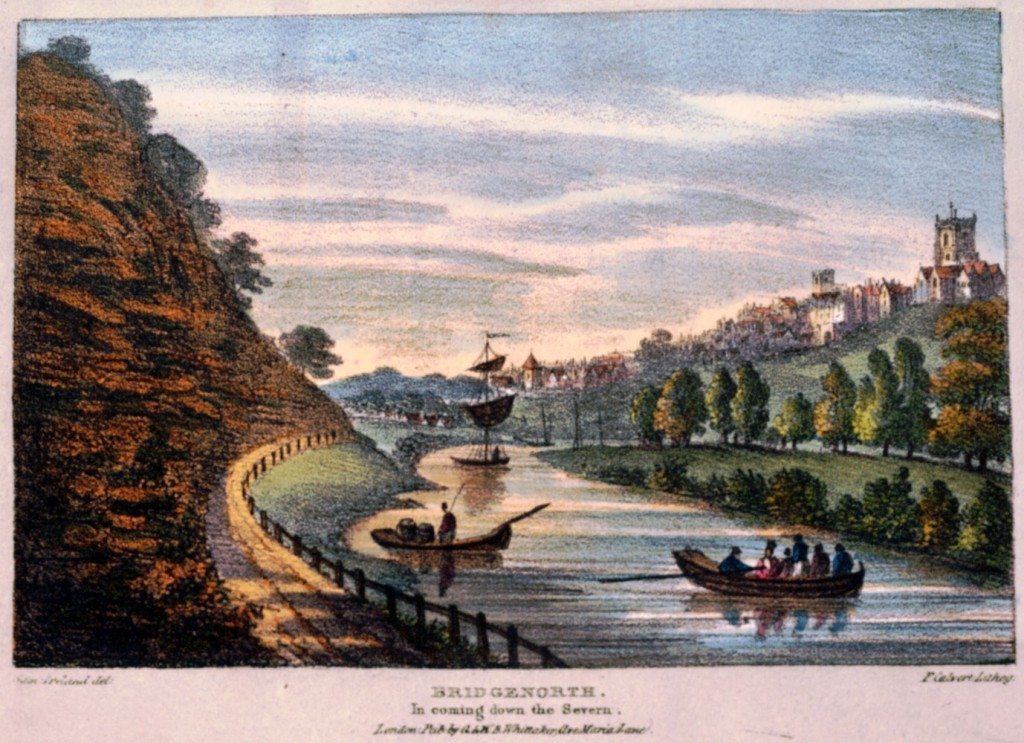 Image: Bridgnorth, Shropshire. Bridgnorth is spectacularly and strategically situated within a gorge of the River Severn. Originating as a port in medieval times, the town became another of Shropshire’s industrial centres during the 18th century.

“Between two rich embowering woods, the Severn, with a full body of water and a strong current, rushes down towards Bridgnorth. Rocks of considerable size present themselves at the extremity of the wood on the eastern side of the river; whilst the town with its churches, on a bold eminence, breaks pleasantly through the thickets by which it is in a manner surrounded.

Bridgnorth is twenty-two miles south-east from Shrewsbury. This ancient borough may be said to consist of two towns, separated by the river, but communicating with each other by a stone bridge of eight arches. The upper town, which is much the larger, rises most agreeably on a hill, or rock of red sand, encompassed by a deep valley, bounded by rising hills….The lower town…is well built, and delightfully situated. In Mill Street particularly – so called from its leading to the town mills parallel to the river – the houses are handsome. The streets are paved with pebbles.

St Magdalen’s church…. was a mean edifice, with a plain square tower at the west end, as seen in the View of “Bridgnorth in coming down the Severn.” This church was much injured during the civil wars. In the year 1796 it was taken down, and replaced by the present handsome structure, from a design by Mr Telford.

« Previous in this sectionNext in this section »
People: Browse
Place: Bridgnorth  |  Shropshire
Image creators: Image from Thomas Harral, Picturesque Views of the Severn, 1824.
Image courtesy of: Shropshire Records and Research