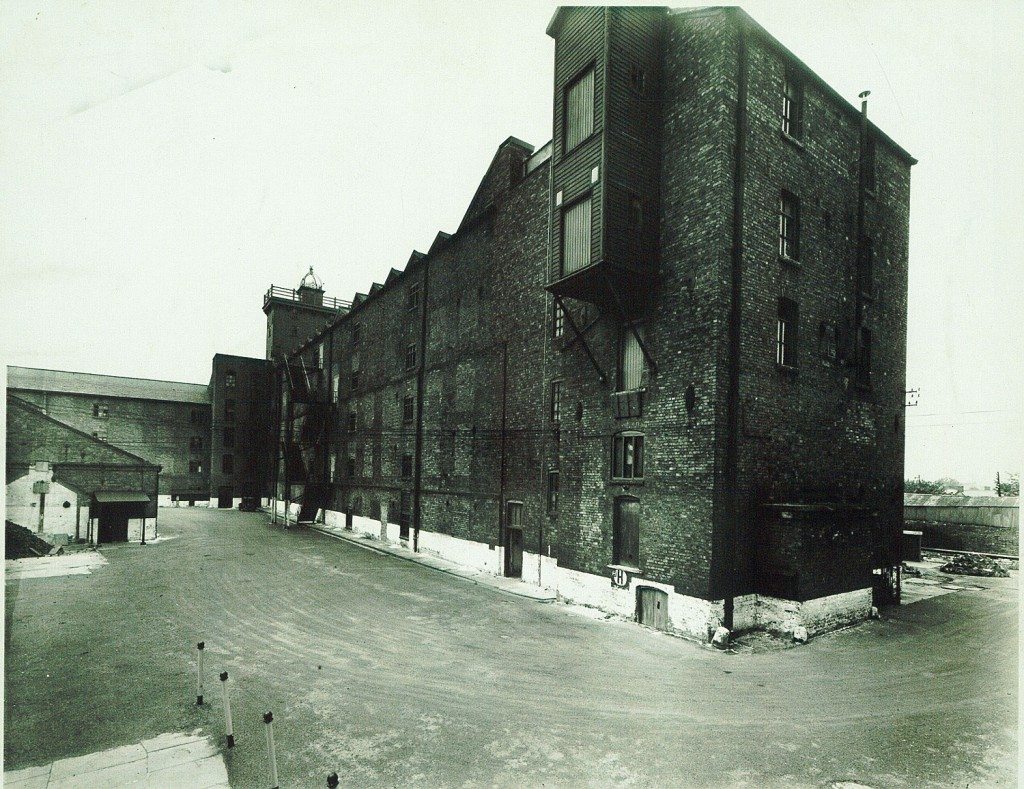 Image: The main mill at Ditherington from the west, c.1945.

Ditherington Mill developed as part of Shrewsbury’s commercial and industrial history. By the seventeenth century, Shrewsbury was an important centre for the woollen trade. Woven cloth from North Wales was finished in the town and sold to markets further away. The trade declined but the dressing and shearing of cloth continued into the 1790s. Two bothers, Thomas (1762-1833) and Benjamin Benyon (1763-1834) made their income from dealing in wool and ploughed their profits into flax-spinning. 2Factories manufacturing woollen and cotton cloth developed in Shrewsbury and its surrounding area in the late eighteenth and early nineteenth centuries using both water and steam power.

Shrewsbury was close to centres of industrial and technical innovation in the West Midlands and the Ironbridge Gorge. In Coalbrookdale, the Darby family developed new ways of producing iron. Other regional ironmasters such as John Wilkinson pioneered new uses for the metal. Thomas Telford arrived in Shropshire in the 1780s and created an infrastructure of canals and roads in the county. Not surprisingly, other industries developed in the county which benefited from these earlier achievements.

Linen was also a long-established local trade. Originally a domestic activity, it was revolutionised in the 1790s by John Marshall, who introduced factory production in Leeds, Yorkshire. Mechanisation spread to Shrewsbury, given the contacts between Marshall and the Benyon brothers. In Shrewsbury, flax was grown, hackled and spun, but on a small-scale basis. In May 1796, before the building of the Ditherington Mill, 12 flax dressers and 21 flax weavers claimed the right to vote. There is no evidence, however, to show that the Ditherington Mill depended on local flax. The Marshall papers in the University of Leeds show that raw flax was imported to Ditherington after 1811 from the Low Countries, the Baltic, Ireland and Normandy. Little came from England. It is not clear whether there was any transference of skills from Shrewsbury flax workers to employees of the firm. 3

A new flax mill was built by the Benyons and Bage at Castlefields in 1804 to spin flax and a smaller works by Charles Bage himself at Kingsland in 1816 to weave linen. Shrewsbury had three flax mills by the early 1820s. Barrie Trinder estimates that they employed at least 1,500 people or 10% of the town’s population. When Bage’s factory went bankrupt in 1827 and the Castlefields mill closed in the mid 1830s, the town’s economy was badly affected. Shrewsbury’s population actually fell between the censuses of 1831 and 1841. 4