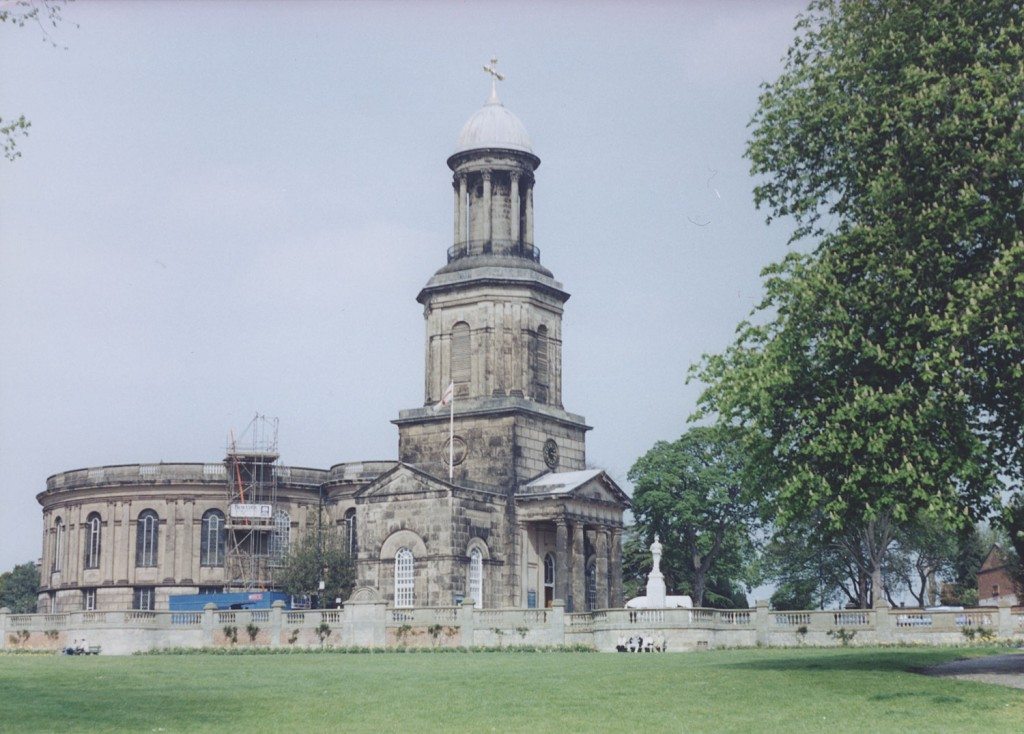 Image: St Chad’s Church, Shrewsbury, built in 1792. The building was designed by the architect George Steuart, who built Attingham hall, near Shrewsbury. Charles Bage was buried in the churchyard.

Charles Bage was interested in science, culture and local politics. Like his father Robert, he commanded a great deal of respect, but lacked a commitment to the business ethic. When Marshall wrote about the end of the partnership in 1804 with Bage and the Benyon Brothers in the Ditherington Mill, he described him as follows: “Mr Bage was possessed of talent, and had a cultivated understanding, but he was not a man of business and perseverance, sufficient knowledge of commercial transactions to form a correct judgement of the mode of conducting them; and he was completely under the control of Mr B. Benyon.” Marshall offered Bage a share in the new concern “more from a wish to act honourably towards him, than on account of his value as a partner…” Bage, though, got a better offer from the Benyons to enter a new partnership to build the Castlefields Mill. The Benyons probably recognised Bage’s capacity as a builder and insight as an inventor. The new business enabled him to increase his capital, but on the dissolution of this partnership in 1815-16, Bage established his own mill at Kingsland which, in Marshall’s words “has not been profitable.”

A letter written by Bage to William Strutt from the Buxton Centre Hotel provides an insight into his mind: “So here I am, enjoying idleness and perfect vacuity of mind. I hardly understand the satisfaction you take in continual labour of mind, and since you are ambitious of continuing in this world as long as you can, you should not work on the machine too hard, but give it occasionally a little relaxation oil.”

Bage’s correspondence with Strutt shows that he held radical views. Writing in 1818 during the period of Lord Liverpool’s “repressive” Tory administration, he was concerned “that Government is becoming everyday more and more absolute, and in the end Parliament will be either discontinued or merely complying and adulatory like the old Roman Senate.”   One letter shows that he did not lean as far as the Unitarians, Strutt, Marshall and the Benyons in supporting the amelioration of working-class conditions. Bage believed that stimulating working-class improvement would encourage unrest and lead to more repressive legislation.  Like his father, Robert, the “Jacobin novelist”, Charles Bage was a political radical. He was not a social paternalist like several nonconformist industrialists of the early nineteenth century. Nevertheless, Bage was involved in establishing a Lancasterian school for local poor children in Shrewsbury.

Bage was active in other local enterprises. He established the first gas company in Shrewsbury and served as mayor of the town. He died in 1822 and was buried in the graveyard of St Chad’s Church, Shrewsbury.