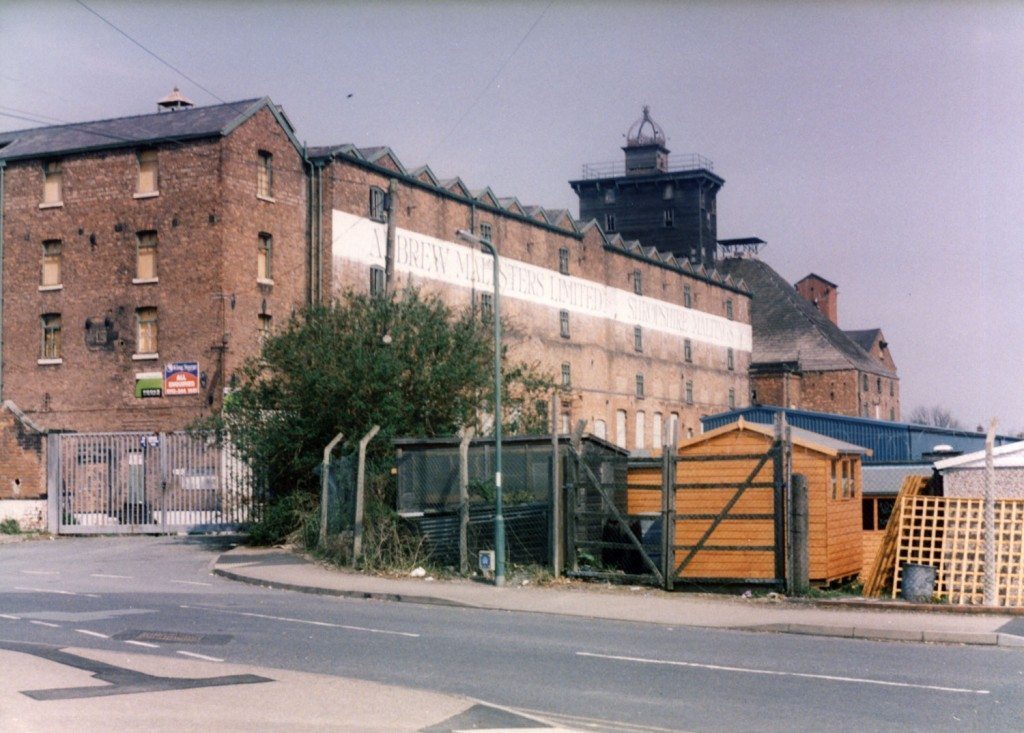 Image: View of Ditherington Mill in April 2003, the world’s first completely iron-framed building. The factory was built in 1796-1797 to spin flax. It continued to manufacture the product until 1886. After 1897, the buildings were adapted as a maltings by William Jones & Sons. With a brief interruption during World War II, they continued to serve as a maltings until 1987. The building has been empty ever since.

Between 1796 and 1797, the world’s first completely iron-framed building, Ditherington Flax Mill, was built for a partnership, Marshall, Benyon and Bage. Their aim was to create a factory to spin flax which could then be woven into linen. Historically, the purpose of the building was less important than its design by its architect, Charles Bage (1751-1822). Bage created the ancestor of all iron-framed and steel-framed structures, including modern skyscrapers. The building remains largely intact and is currently (2004) unused. It lies within a complex of several former industrial buildings on the outskirts of Shrewsbury town centre.

This article by Malcolm Dick explores the history of Ditherington Mill and places the factory within the context of local industrial developments. It also examines the partnerships in which Bage was involved and looks at his involvement in two other industrial sites in Shrewsbury at Castlefields and Kingsland.

The author has been helped by published research by Barrie Trinder into the industrial archaeology of the mill and archival material at Shropshire Archives. Illustrations are drawn from Shropshire Archives, Birmingham City Archives and contemporary photographs by Nabi Heydari, which were taken in April 2003.

Kingsland Mill Sources and Further Reading Most of the information about Ditherington Mill can be obtained from Shropshire Archives. A particularly useful primary source is a collection of letters from Charles Bage to William Strutt. Additional material is held at Birmingham City Archives and Leeds University Library. A web search will reveal a limited amount of information. Rimmer, W G, Marshall’s of Leeds, flax-spinners 1788-1866 (1960). Tann, Jennifer, The Development of the Factory (London, Cornmarket Press, 1970). Trinder, Barrie, “Ditherington Flax Mill, Shrewsbury – A Re-evaluation”, Textile History, 23 (2), 1992, pp 189-223.
Most read
Chronology of principal events that occurred during the Industrial Revolution in the West Midlands. Significant places in the historic counties of Derbyshire, Herefordshire, Shropshire, Staffordshire, Worcestershire and Warwickshire during the Industrial Revolution. Industrialists, engineers, artists, thinkers and writers who contributed to the Industrial Enlightenment, technology, art, culture, religion and politics. Explorations of industries and innovations; landscapes and localities; art and architecture; culture and diversity; and the place of the West Midlands in the contemporary world.
Revolutionary Players was developed between 2002 and 2004 and financed by the New Opportunities Fund. Revolutionary Players was created by Dr Malcolm Dick & Dr Kate Iles and managed by Birmingham Museums until 2015. Revolutionary Players is now published and funded by History West Midlands.