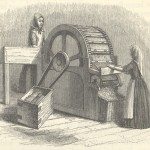 After drying, the flax stems were bruised and broken using a machine called the brake. Alternatively they were crushed with rollers revolving in contrary directions. The bruised flax was then inserted into a scratching frame and repeatedly struck with a flat wooden sword or scrutcher. This process separated the pieces of wood from the fibre. In flax mills breaking was performed mechanically.

Once the flax was removed from the woody particles it was converted into yarn. In flax mills the flax was lifted to the top floor of a mill and separated into different lengths and the ends of the fibres were roughened prior to spinning.

Heckling or hackling involved cleaning, splitting and separating the filaments of flax. Dirt and small fibres were removed using combs. In flax mills a mechanically operated heckling machine was used.  Frequently, heckling was carried out in a separate building from spinning. This was the case at Ditherington.

After heckling the heckled flax, known as line, was sorted according to their degree of fineness. It was then converted into ribands or slivers where it was converted into a flat narrow tape and subsequently given a slight twist.

The flax was then spun. Prior to industrialisation, this was conducted by women in the cottage of the flax weaver. In flax mills this was conducted mechanically, using machines similar to Arkwright’s water frame which had been developed for the production of cotton yarn.  Weaving flax into linen by machine proved to be much more difficult as Charles Bage found at his Kingsland Factory.