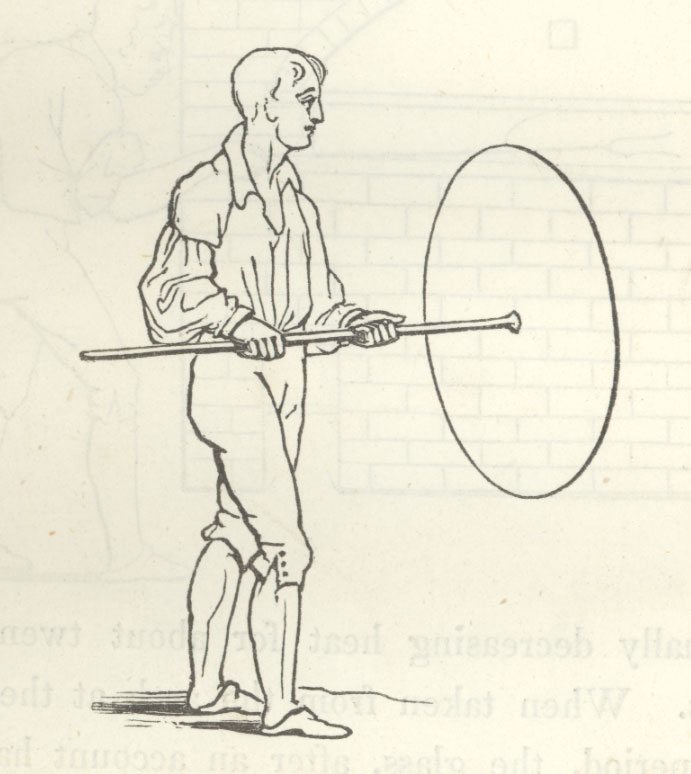 Image: One stage in the process of Crown glass manufacturing. The workman rotated the heated globe of glass on the iron pontil or punty rod with increasing velocity. A circular glass sheet was formed, held in the centre by the rod to form the “bulls-eye” or “bullion” prior to taking it to the annealing oven. William Cooper, Crown Glass Cutter & Glazier’s Manual (1835).

In Crown glass production, the blower dipped a hollow iron rod into the “metal” and by blowing, rolling and reheating the “metal”, a large globe was formed with an elongated tubular neck.  This globule was transferred to another workman who rotated and slowly heated the neck of the globe causing it to open gradually. This form was then passed to the “flasher” who placed the rod once again in the furnace but this time it rested on a hook fixed into the wall.  The “metal” was then rotated rapidly until the glass assumed the shape of a flat sheet or “table” with a thick boss at the centre. This table was then placed in the annealing oven for twenty-four hours at an extremely high temperature of 600-700º Fahrenheit. The table was then removed and cut up into window glass. The thick boss in the centre formed the panes, which were known as “bulls-eye” or “bullion” glass.  Crown glass survived for many years longer in England than on the continent, where sheet or plate glass became the norm.