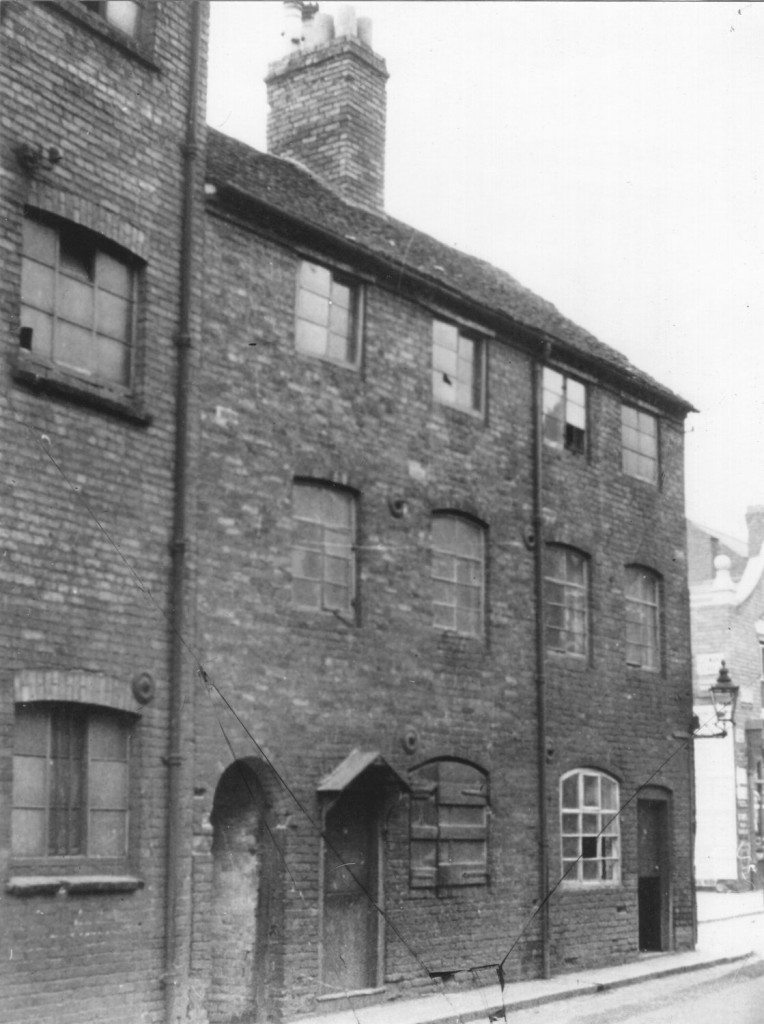 Image: Brussels Street Cottages, Kidderminster. These terraced houses show examples of the type of homes occupied by weavers in the early 18th century.

As early as 1789, the Kidderminster weavers, already noted for their independent nature, went on strike against a wage reduction proposed by the masters. An even more ill tempered dispute in 1817 resulted in the use of troops to keep order, called out on the request of the then Town Clerk, George Hallen. This strike was the first time that broadside poetry was used as propaganda, showing the true intentions of the weavers quite clearly.

See our masters how they bind us

In the midst of slavery;

See the tyrants how they drive us,

To death or liberty.

To gain the cause or die;

We will be free from slavery

And have our liberty

In 1825 the weavers association sent financial support to striking weavers in both Bradford and Wilton, demonstrating their high organisational ability and political radicalism.

On 15th March 1828, the masters published their intention to reduce the payment for one yard of Brussels from one shilling to 10d (old pence). The weavers promptly called a crisis meeting in order to declare a strike. The resulting dispute lasted five months, featured highly in the national press and almost ruined the carpet industry in Kidderminster.

Both sides pursued a vigorous propaganda campaign either in the press or by means of broadsheet verses. One of the first of these, The Carpet Weavers true tale, was inflammatory even at the outset of the dispute and complained of the masters’ opulence compared to the poverty of the weavers.

Potatoes, oatmeal, you must eat,

No dare to think of butchers’ meat;

While they to noblemen aspire,

In equipage and rich attire.

Of nineteen broadsides published during the strike, all but two were on the side of the weavers. Indeed, many of them compared the poverty of the weavers with the wealth of the masters.

Some of our masters then you’ll see;

Were weavers then as well as we;

But now they’re rich, and we are poor,

Scarcely can we approach their door.

Their horses, gigs and chariots too,

But on more mischief still are bent

Some of these poems became increasingly strident in tone, such as The Carpet Weavers Determination.

To gain the cause or die,

Stand to your colours, keep your ground,

And gain the victory

The first verse to put the masters’ case claimed to be from a moderate weaver, one Luke Cranbourne, although it is doubtful whether he actually existed.

Why to ourselves should we be blind,

And call our masters so unkind?

The times have chang’d, we plainly see,

Profits have chang’d- and so must we

This caused a sensation in Kidderminster and resulted in a further flurry of more broadsides from the weavers’ side, not all of them strident in tone but some even slightly humorous or wistful.

To ridicule I’ve no pretence

I wish, poor Luke, you had more sense,

And look to Him who rules us all,

And never thy poor mind enthrall

The propaganda became more embittered when the Rev. Humphrey Price got involved on behalf of the weavers. Born in Kidderminster, he was parson at Christchurch, Barton-under-Needwood, near Lichfield. Although undoubtedly well intentioned, his verses only exacerbated the situation and served to prolong the dispute. He was to pay a heavy price for his involvement, eventually serving one year in gaol, and his mental state was later called into question. The second of his numerous verses was penned in the guise of a carpet weaver’s wife.

Hush thee, my babe! thou wilt not see

Thy mother sink in misery;

Thy father too- all gone his bloom,

And his heart’s blood upon the loom

His third poem, A Kidderminster Weaver’s Wife’s Dream, resulted in a charge of libel against Price by John Broom, descendant of the owner of the first carpet factory,  was widely thought to be the owner of the house mentioned in the following verse.

Because he said- now I will build

Myself a spacious house, and gild

It for my daughter, wife or son,

And paint it with vermilion?

By July the carpet manufacturers were advertising for workers outside the area, which caused great resentment among the striking weavers. Carpet factories were set up in other towns such as Bridgnorth and Stourport. The strike eventually ended in August when the weavers were forced, through starvation, to accept the masters’ terms for a return to work. Their attempts to mobilise the whole country behind them had ended in ignominious defeat when the dispute did not receive the expected amount of support from other workers around the country. In order to make up for lost production, the hated twelve to twelve shifts were promptly introduced by the masters, at reduced rates.