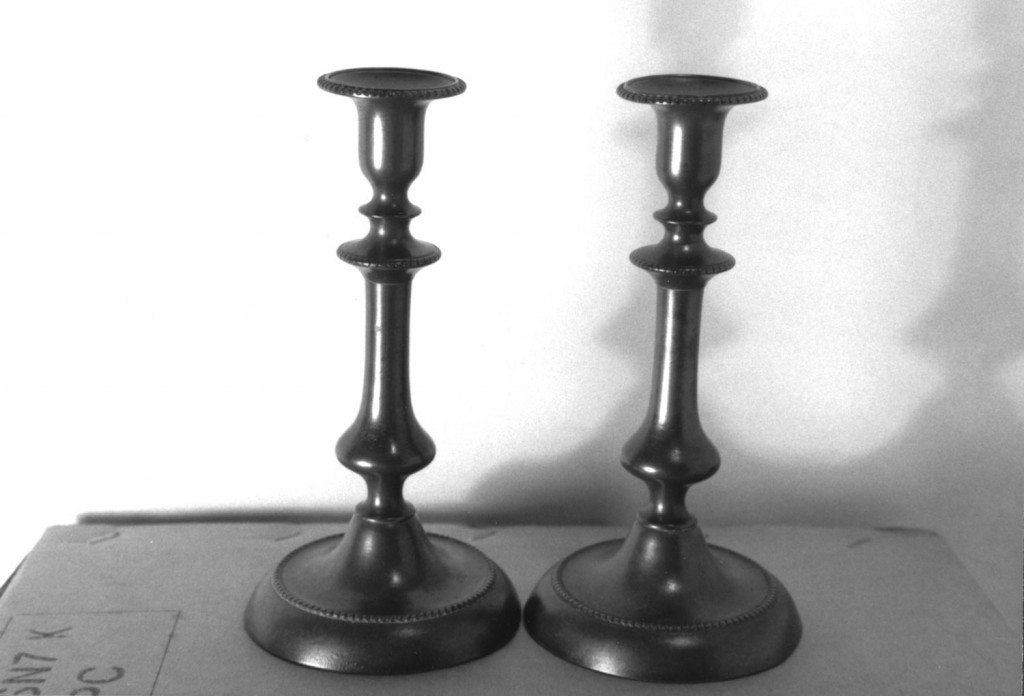 Image: A pair of pewter candlesticks. Today these are admired for their decorative qualities, but before the 19th century, they provided essential light within the home for reading, writing or sewing. Pewter was also used for the moulds to make candles.

Pewter is an alloy made from tin, but the metal is too soft for useable items, so it has to be combined with small quantities of one or more hardening agents, copper, bismuth, antimony or lead, to improve its durability. Pewter was relatively cheap, soft enough to be moulded into shaped objects, easy to repair and capable of taking intricate designs. By the 15th century, a guild was created to control standards and ensure quality, the Worshipful Company of Pewterers. English pewter achieved high standards of production and design and by the 15th century it was England’s second most important manufactured export after cloth. Pewter artefacts were used for eating, drinking, serving, storing and providing candlesticks for lighting. Domestic items ranged from pepper pots to chamber pots and spoons to snuff boxes. Surgeons purchased bleeding bowls and syringes made from the alloy. Pewter also served God and the Devil. Churches required wine flagons, chalices and organ pipes, whilst tankards, pint pots and spirit measures used in public houses were made from pewter. At the end of the 17th century, the industry was probably at its height with important centres of production in London, Wigan and York, but competition from brass, tinplate and porcelain began to affect the market for the product. At the same time the Worshipful Company of Pewterers attempted to protect the dominance of pewterers in London and prevent the introduction of new techniques. Innovations therefore developed elsewhere in the 18th and 19th centuries. Whilst the London trade declined, Bewdley and Wribbenhall became the most important manufacturing centre for the product in 18th century Britain. According to Charles Hull in his 1999 study of the product,

“Bewdley…became the main centre for pewter manufacture; in any random selection of eighteenth- and nineteenth century cast pewter, 50 per cent is likely to have been produced there.”