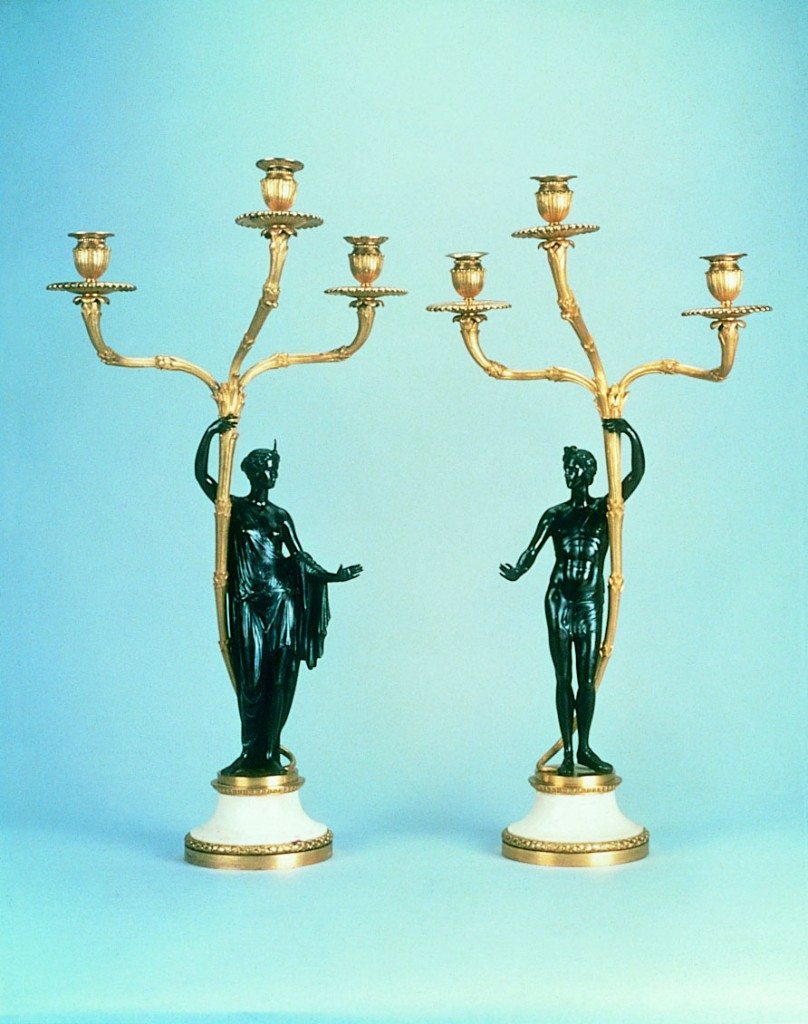 Image: A pair of Apollo and Diana candelabra made by Boulton and Fothergill. Ormolu, bronze and marble. c. 1775 from Soho House, Museum, Handsworth Birmingham.

These items represent the highest quality workmanship at Soho Manufactory. Apparently only two pairs were made. The pedestals are made from white marble and the 12 inch bronze figures are fixed to the base by a copper plate. The three-branched candelabra are shaped in the form of palm branches and are made from ormolu. “Or moulu” is French for ground gold. The process of creating ormolu involved amalgamating gold with mercury to enable brass or bronze to be gilded.

Once the Soho Manufactory was built, Matthew Boulton moved his business from Birmingham town centre. With his business partner John Fothergill he continued the buckle, button, jewellery and ‘toy’ trade. Boulton & Fothergill also expanded into tableware and decorative goods, for which there was an expanding market.

Boulton & Fothergill was probably the first firm outside Sheffield to produce ‘Sheffield Plate’. Silver and copper were fused together and rolled into bi-metallic sheet, from which tableware was produced at a much lower price than items made entirely of silver. Silver-on-copper plating was in use until the invention of electro-plating in the mid-19th century. It opened up a new market for affordable domestic ‘silverware’.

Boulton & Fothergill also produced sterling silverware. This had to have the hallmark. Birmingham did not have an Assay Office when the business started, so goods had to be sent to London or Chester for hallmarking. As a result of a campaign led by Boulton, the first Birmingham Assay Office opened in 1773 and began hallmarking locally-made precious metal goods with the anchor mark still used today.

Fashionable ormolu (mercury-gilded ornamental items such as candelabra, clocks and perfume burners) was also produced at Soho. Often the richly gilded metal parts were combined with colourful stone such as Blue John from Derbyshire. Other Soho products included coins and medals.

In 1775 the Scottish engineer James Watt moved to Birmingham and joined Matthew Boulton in partnership to develop the steam engine. Not only did Soho switch over from water power to steam power; Watt’s steam engines were installed in many countries as industrialisation began to take shape. The Boulton & Watt partnership became the most famous part of the Soho business.