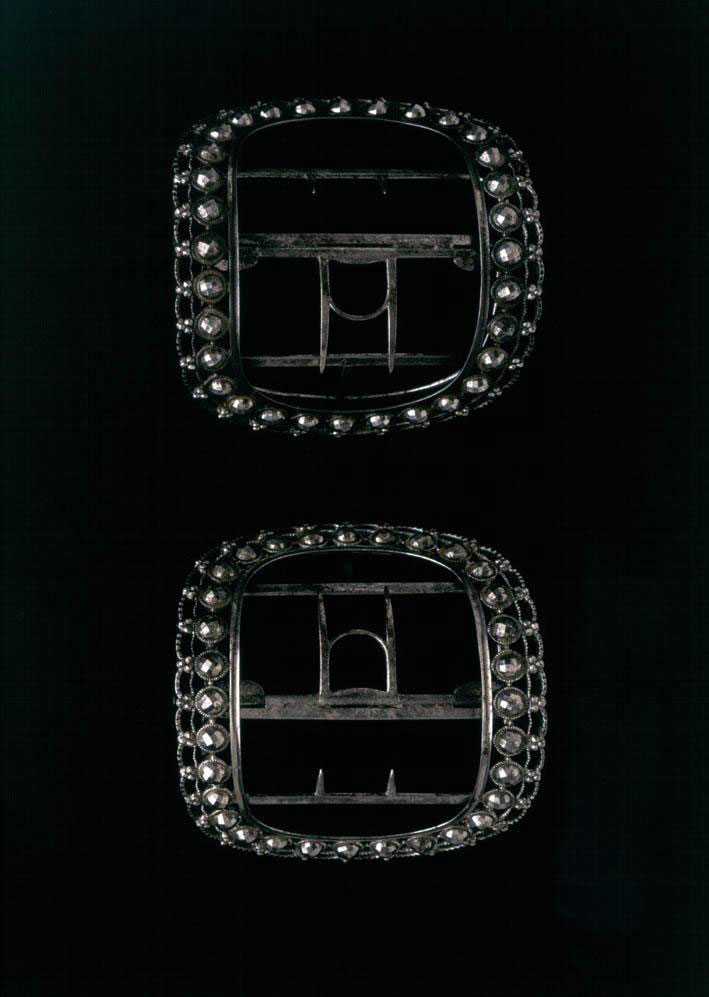 Steel toys and jewellery are often referred to now as “cut steel” because of the tiny beads and studs which have facets cut on them, like gemstones. The studs are riveted or screwed into steel backing plates cut to the required shape.

A wide range of jewellery, and other items such as chatelaines, watch chains, beaded purses, sword hilts, buckles and buttons were made in cut steel. Some of these achieved a very light, delicate effect by the use of dozens of tiny studs or beads, and steel jewellery and decorative articles were extremely fashionable, glittering in candle-light in a way that mimicked the sparkle of diamonds.

Cut steel is sometimes confused with marcasite, which is a similar colour and produces a similar effect. The difference is that cut steel is metal, while the stones in marcasite jewellery (which are usually mounted in silver) are indeed ‘stones’ – marcasite is the jeweller’s term for the mineral iron pyrites.

In 1830 Thomas Gill described the production of steel jewellery in Birmingham, from cutting the blanks for the steel beads or studs, to final polishing in a mixture of lead and tin oxide with proof spirit on the palms of women’s hands, to achieve their full brilliance. Gill comments: “No effectual substitute for the soft skin which is only to be found upon the delicate hands of women, has hitherto been met with.”1

People often ask, doesn’t cut steel jewellery go rusty? The answer is yes – when it was in regular use it had to be carefully dried if it got wet (for instance, shoe-buckles on a wet day). Some cut-steel jewellery, especially that made in Woodstock, Oxfordshire, had studs which could be unscrewed from the backing plate for thorough cleaning and drying.