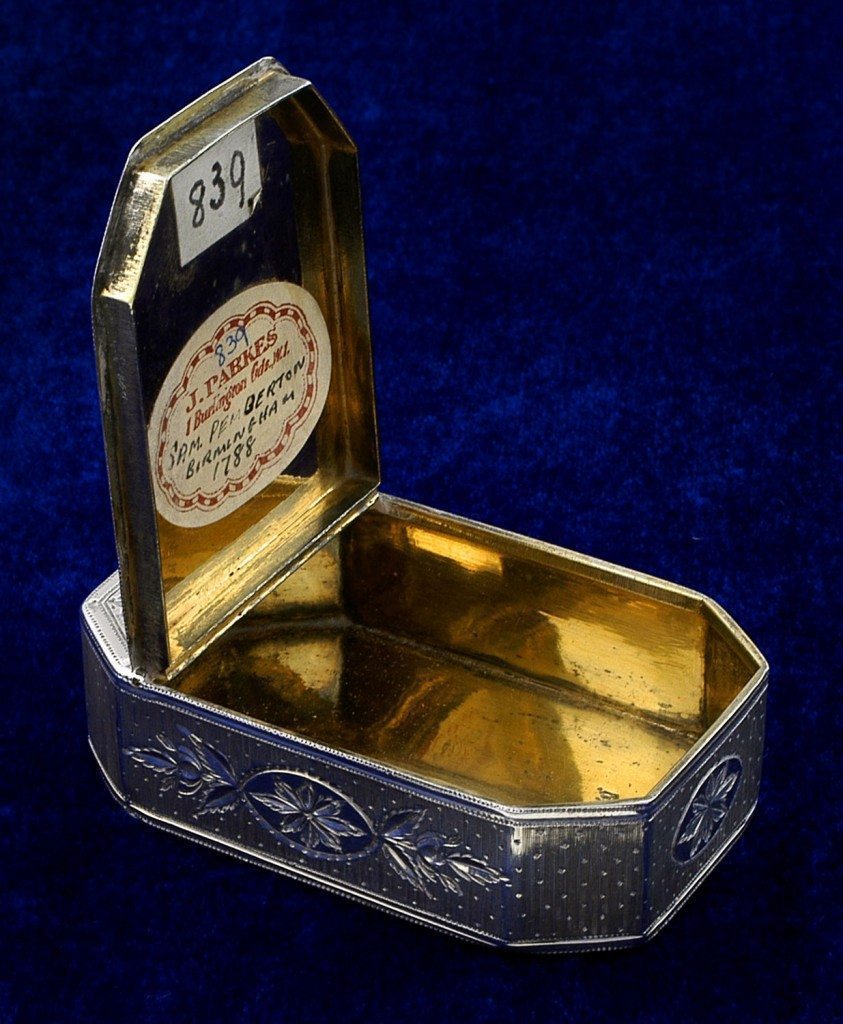 Image: Engraved snuff box with bright-cut decoration made by Samuel Pemberton in 1788, an example of the range of silver items that were manufactured in Birmingham in the late 18th and early 19th centuries.

‘Birmingham toys’ (sometimes disparagingly referred to as ‘Brummagem toys’) comprised a very wide range of small items for personal use. Matthew Boulton perhaps made the widest range of any of the Birmingham makers, but he was certainly not without competition, although we know far less about his rivals. Apart from his largest and oldest-established competitor, John Taylor, who claimed in 1759 to be employing 600 people, there were several smaller local makers whose work, particularly in silver, became well-known.

They include several members of the Pemberton family, notably Samuel Pemberton (1738-1803), Matthew Linwood (1754-1826), Joseph Taylor (1767-1827), Edward Thomason (an ex-Soho apprentice and the first Birmingham manufacturer to be knighted – in 1832), Thomas and Joseph Willmore, and later, the famous Nathaniel Mills (very collectable today). Comparatively little is known about most of them, but Birmingham Assay Office has a fine collection of Birmingham silver ‘toys’, including nutmeg graters, snuff boxes, vinaigrettes, card cases, caddy spoons, child’s rattles, toothpick boxes, and buckles.

Toys were made in a variety of materials. Metals included silver, gold, brass, steel and pinchbeck (a gold-coloured alloy of copper and zinc). Other materials used included tortoiseshell and mother-of-pearl. Usually, only the silver and gold items can be definitely identified and accurately dated. This is because, as precious metals goods, they had to have the hallmark. Items made in non-precious metals, such as steel, were not required to be hallmarked and rarely have any helpful marks.