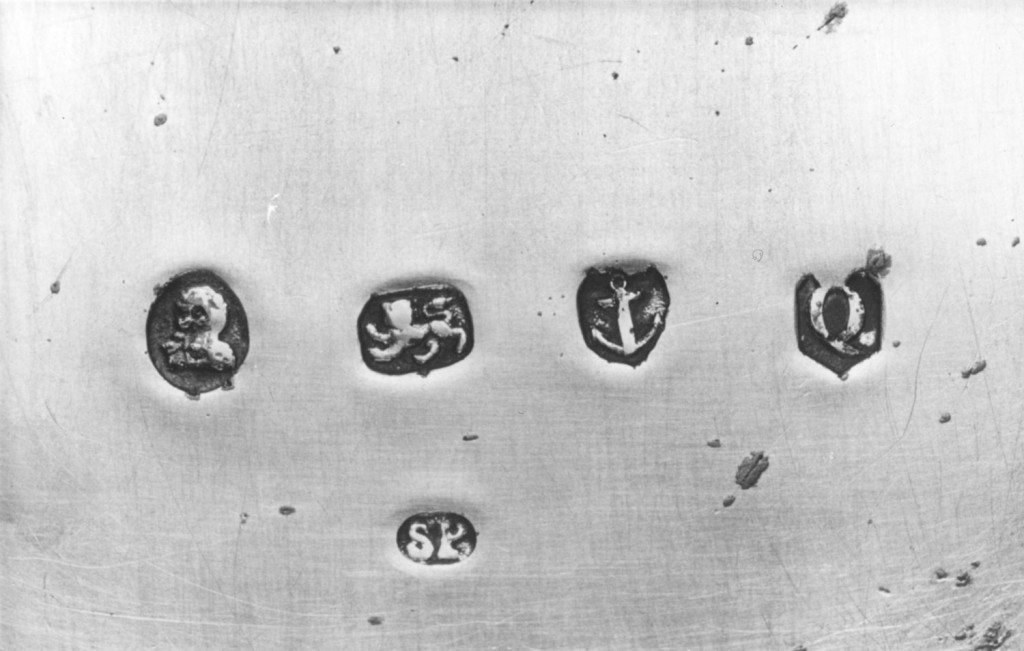 Image: Hallmark from an engraved snuff box with bright-cut decoration made by Samuel Pemberton in 1788:

For over 700 years there have been laid-down minimum standards for silver and gold alloys. Gold and silver are alloyed, or mixed with other metals, for both economic and technical reasons, but the proportion of silver or gold to other metals in the alloy must conform to one of the legal minimum standards.

King Edward I instituted the forerunner of today’s UK hallmarking system in 1300. ‘Guardians’ were instructed to visit goldsmiths’ workshops to assay (test) items for their precious metal content. If goods passed the assay they were stamped with a leopard’s head to guarantee the standard. Other marks included a letter indicating the year, and the maker’s initials. If goods failed to come up to standard, they were broken. In 1478 the Worshipful Company of Goldsmiths established their first assay office at Goldsmiths’ Hall. From then on London makers had to take their goods to the Hall for assaying and marking – hence the term “hallmark”. By the 18th century there were assay offices in a number of provincial towns. Each had its own town mark, to show where the item had been hallmarked.

Matthew Boulton’s leading role in the establishment of Birmingham Assay Office (which initially met with considerable opposition from London) was referred to in Section 1.2. It is often asked why Birmingham’s mark is an anchor, when the city is so far from the sea. From 1771-73 Birmingham and Sheffield ran joint campaigns to have their own assay offices, and met periodically to discuss tactics at the Crown and Anchor Tavern in the Strand in London. When the Bill was passed, Birmingham took the anchor for its mark and Sheffield the crown – perhaps on the toss of a coin. (Sheffield later changed to the Tudor rose.) The opening of the Assay Office marked an important step in the development of Birmingham’s toy trade.