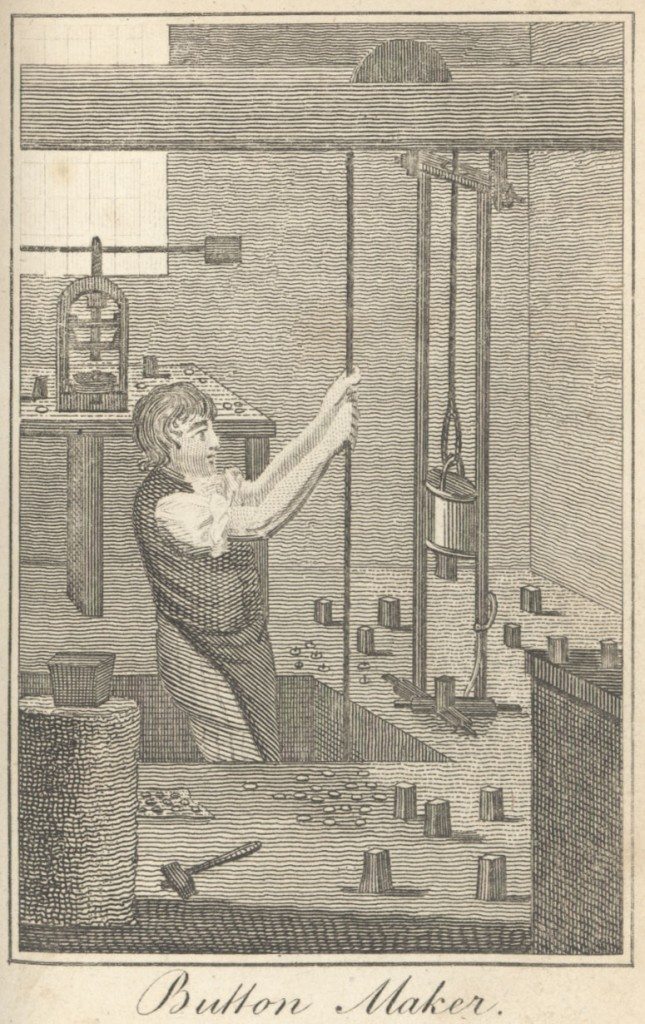 Image: Button Maker, The Book of Trades or Library of Useful Arts, Part III, third edition (London Tabart and Co, 1806). Buttons were could be made from a wide range of materials including gold, silver, steel and other metals, glass, silk, mohair and pearl. In this image the button maker is using a machine which takes dies to stamp a pattern on a metal button. By means of a single pulley he raises a weight to the lower part of which is fixed a die. He lets the weight fall down on the metal and the item is stamped. The button then has to receive a shank which is performed by solder and then polished by women workers.

Mass production led to a move away from the old system where one craftsman would make an item from start to finish, to the factory system, where each person carried out one stage in the process. A visitor’s account from 1755 describes button production at John Taylor’s factory, making it clear that division of labour is in use: “The Multitude of Hands each Button goes thro’ before it is sent to the Market is surprising; you will perhaps think it incredible, when I tell you they go thro’ 70 different Operations of 70 different Work-folks;”1

Stamping, pressing, piercing and polishing were all done with the help of machinery introduced during the 18th century, and many new alloys were introduced which were suitable for use with these machines. Throughout the 18th and 19th centuries Birmingham manufacturers obtained numerous new patents for producing components for the buckle, button, toy and jewellery trades. A visitor to Soho in 1787 described

Wheels, vices, pincers, cranks, lathes, drills, shears, hammers of all sizes, coin- presses, all assist the workmen in binding, twisting, shaping, pointing, cutting, marking, and turning the metals with wonderful quickness to produce the requirements of men, women and children, for all changes and caprices of fashion. The workmanship is most easy and quick. Women and children at low wages can help the workmen in many ways… In many cases the work is so divided that the workman knows only his own part and not the complete work… Some of the machines for stretching, gilding or silvering sheets of copper I have seen in France [rolling mills]…2