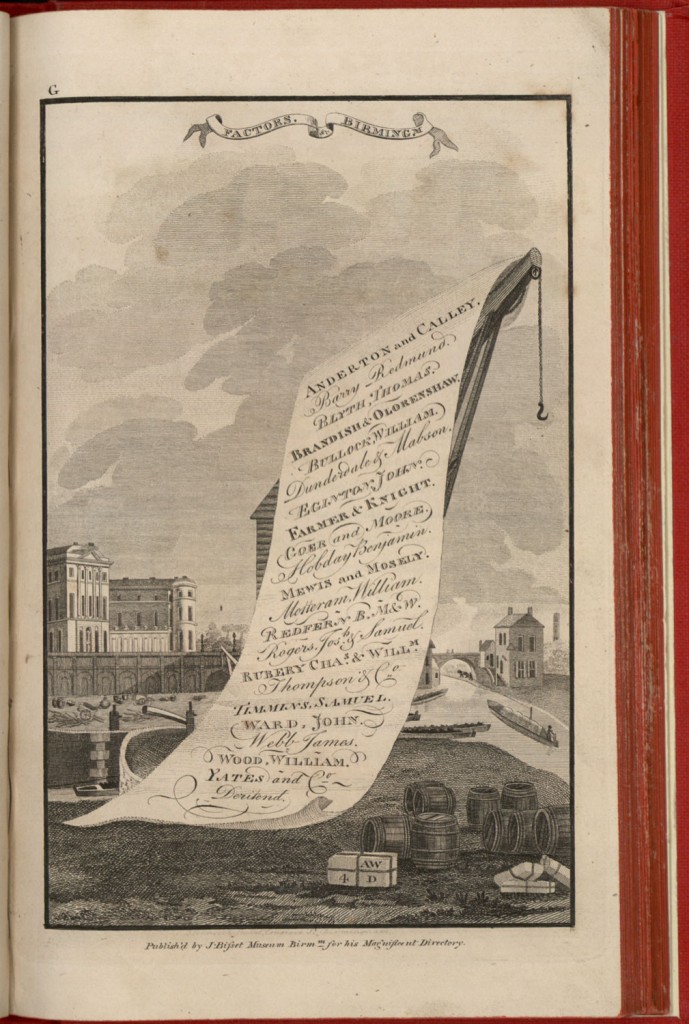 Image: Factors or Commercial Agents in Birmingham with a view of the Crescent and Wharf. J Bisset, Bisset’s Magnificent Guide or Grand Copper Plate Directory for the Town of Birmingham…(Birmingham, Printed for the Author by R Jabet, 1808). Factors transacted business for another, bought or sold goods on commission or loaned money. J Hancock’s engraving is dominated by a scroll, supported by a crane, which provides the names of twenty-one businesses. To the left is a view of canal wharves near the Crescent, a distinguished Georgian terrace. The canal basin presents commercial activity including barges, a canal bridge and a lock, which is partly hidden by the scroll. Goods in packages and barrels are shown ready for loading.

Agents provided a valuable service to manufacturers by having show-rooms, dealing with retail customers, holding stock, arranging credit and handling payments. In 1793 Boulton appointed Richard Chippindall of 59 Watling Street, London, as his agent, and the letters between them give some useful insights into the relationship.

Chippindall’s early efforts showed he had the right contacts and his finger on the pulse of fashion. He supplied samples to the Royal family, and sent advice on what size and shape of shoe buckles were the height of fashion in the capital. There was a careful exchange of letters in which the exact method of describing different buckles was established, so that there would be no misunderstandings. Boulton also sent advice on coating steel goods with light oil and storing it in air-tight containers, to prevent it tarnishing while in stock.

On the matter of prices, Boulton observes:

First, there is my profit; then 2nd, the Birmgm Factor who rides from one Country Town to another for small orders, travils at great expence & must have his profit. He sells to the Newcastle or Exeter wholesale dealer who must have his, 3rd, profit, & he sells them to the small Retail Shopkeeper, who must also take a 4th profit, which is perhaps the largest of all because it is taken upon a larger sum per pair & his returns are small. Hence the more of these profits that can be spared or reduced the more extensive will be the Sale.1

One of the common problems was the length of time customers took to pay. Six months’ credit was generally offered, and some overseas customers were reluctantly allowed as long as 18 months’ credit – hazardous when dealing with customers abroad.