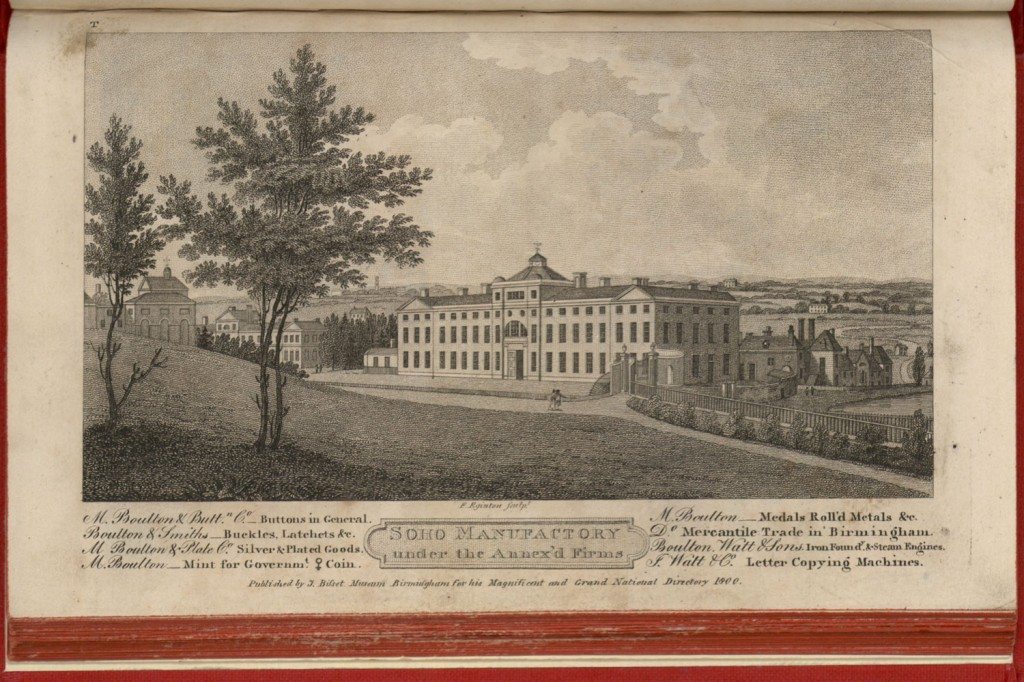 Matthew Boulton’s Soho Works was built between 1762 and 1764 to provide a base for his expanding buckle and button business. The advertisement lists the “annexed firms” which formed part of his industrial and commercial empire, producing buttons, buckles, and latchets, silver and plated goods, coins, medals, iron, steam engines and letter copying machines. The stables and latchet works are shown on the left of the engraving. Behind the factory on the right is the rolling mill.

3. The Soho Manufactory: From Snow Hill to Handsworth

Matthew Boulton did not have room to expand the business at Snow Hill, so he began looking for a site for a new manufactory. In 1761 he leased 13 acres of land just over the Hockley Brook, in Handsworth. This was about two miles from Snow Hill, and just inside the Staffordshire border. The land included a mill and a house. The area was already known as Soho. The name probably has the same derivation as the Soho in London – it is based on a hunting cry. An inn in the area was said to have a signboard showing a huntsman blowing a horn, from which the word “Soho!” issued.

On this site Matthew Boulton built the Soho Manufactory. It was completed in 1765 at a cost of some £10,000. The house on the site, Soho House, had been built c.1757. In 1766 Boulton and his second wife moved into the house so that he could live nearer the business. Boulton was one of the founders of the scientific society known as the Lunar Society, and Soho House became one of the group’s regular meeting places.