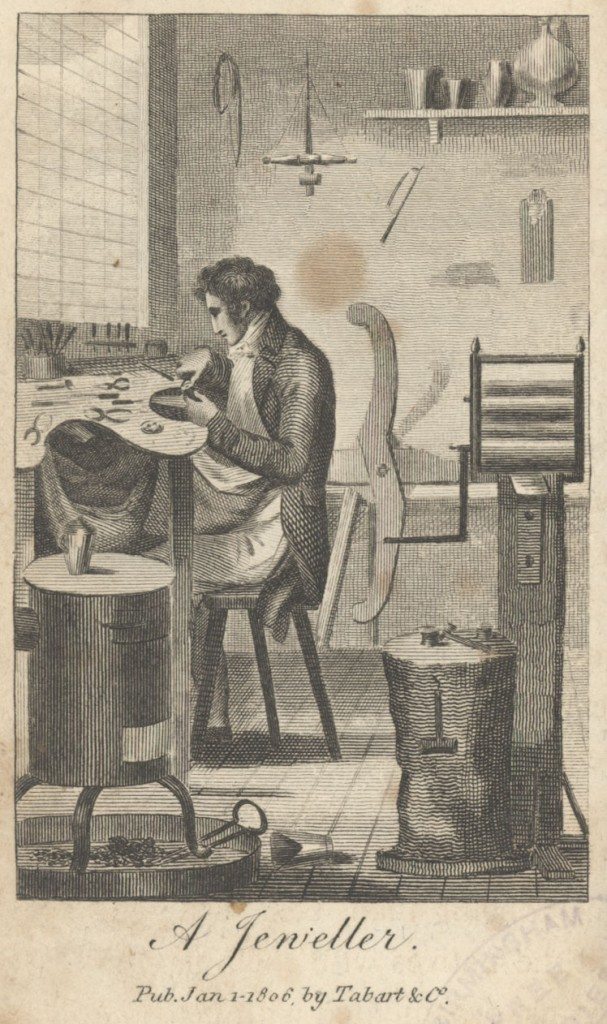 Image: A Jeweller, The Book of Trades or Library of Useful Arts, Part I, third edition (London Tabart and Co, 1806). The print shows a craftsman in a workshop. The board at which he works is fastened with leather skins to catch the filings of small pieces of precious metal. The tools include files, drills, a small hammer and a crucible on a block of wood. On his left hand is a drill bow, a flexible instrument consisting of steel to which is fastened a cat-gut. The cat gut is twisted round one of the drills to enable the jeweller to drill small pieces of metal. The flatting mill on the right consists of two highly polished steel rollers and is used to flatten wire. Behind him is a drawing bench on which he draws out gold or silver wire. A German stove is represented at the front of the print to heat the workshop. There is a crucible on the stove and another on the floor. The crucibles are not heated in the stove but in a forge.

When Edmund Burke first gave Birmingham the nickname “The Toyshop of Europe”’, it may not have been entirely complimentary – Birmingham had a reputation for making cheap and shoddy trinkets. Matthew Boulton and some other manufacturers strove to improve Birmingham’s reputation by endeavouring to produce better quality goods. An industry making largely inessential items became essential as a major collective employer of labour. It should also be remembered that it greatly increased Birmingham’s wealth, and that Birmingham’s supremely adaptable workers learnt from it how to do more things with metal than they had ever thought of before, knowledge which became part of Birmingham’s skill and knowledge base for succeeding generations of manufacturers of all kinds.

The toy trade itself led directly into the development of the city’s jewellery trade. In the late 18th century, as shoe buckles began to go out of fashion, to be replaced by ‘shoe strings’ (shoe laces), many bucklemakers turned to jewellery to survive, and some of the city’s oldest-established manufacturing jewellers could trace their origins back to buckle, button and toy makers. Some, like John Bragg I, emigrated to America to try their luck at buckle-making there. He, like many others immigrants, succumbed to the yellow fever which was raging in New York in the 1790s. His widow and children came home to Birmingham, and his son and grandsons went on to create one of Birmingham’s best-respected jewellery companies, T. & J. Bragg, which was awarded the Royal Warrant in the 1880s.

The importance to the city of these closely related trades cannot be over-estimated. As one 19th century commentator put it, it was “buttons that made Birmingham, not Birmingham that made buttons”.1