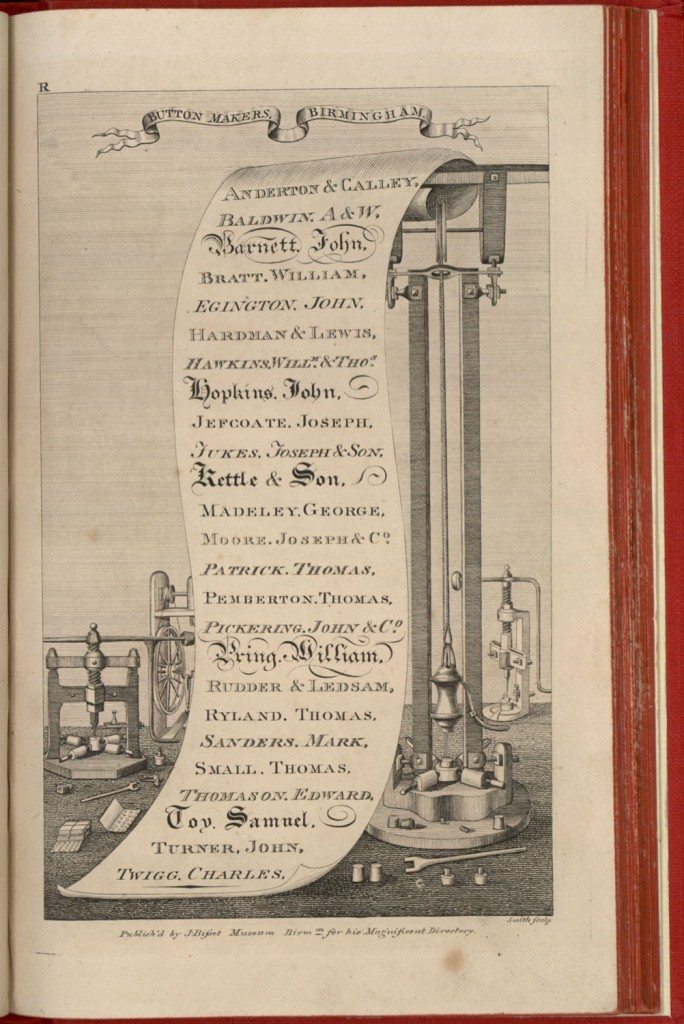 Image: Advertisement for Button Makers in Birmingham. J Bisset, Bisset’s Magnificent Guide or Grand Copper Plate Directory for the Town of Birmingham…(Birmingham, Printed for the Author by R Jabet, 1808). Twenty-five button-making businesses are named on a scroll. The engraving is particularly interesting in showing machinery for the trade, including a stamp, lathe and presses. Button making had become one of Birmingham’s most important industries by the early 19th century, benefiting from rising demand at home and overseas and increased mechanisation.

The market for ‘toys’, at home and abroad, was large and long-lasting, providing a great deal of employment. It also had a broad social spread, from the emerging middle classes to the nobility, for while the latter could and did buy silver, gold and diamonds, there is no doubt that they were also captivated by the sparkling steel wares which came from Birmingham, and also Wolverhampton and Woodstock.

Matthew Boulton had no doubt that he had a market for his steel wares among the upper echelons of society, and he deliberately set out to woo them. Wealthy customers who bought cut steel dress sword hilts or chatelaines, elegantly embellished with blue and white jasperware plaques from his friend Josiah Wedgwood, might also be tempted to become customers for silver or Sheffield plate tableware, and ormolu ornaments. In 1763 he wrote to his wife, Ann, from London:

Yesterday morning I got a Friend to present one of my Sword Hilts to the Prince Edward who was so pleased with it that he orderd it to be mounted immediately & I had ye pleasure of seeing him ware it at the Play last night. The Prince of Wales also liked it very much & desir’d I would make him one but a little different.1

Boulton relied heavily on networking, personal contact and lots of letter-writing to build his customer base, but advertising was also increasingly employed by the Birmingham manufacturers to promote their works. The first illustrated directory of Birmingham, Bissett’s Directory of 1800, contains a number of finely-engraved advertisements from local manufacturers in the fields of button, toy and silverware.