Home·Browse·Birmingham Toys: Made at Soho 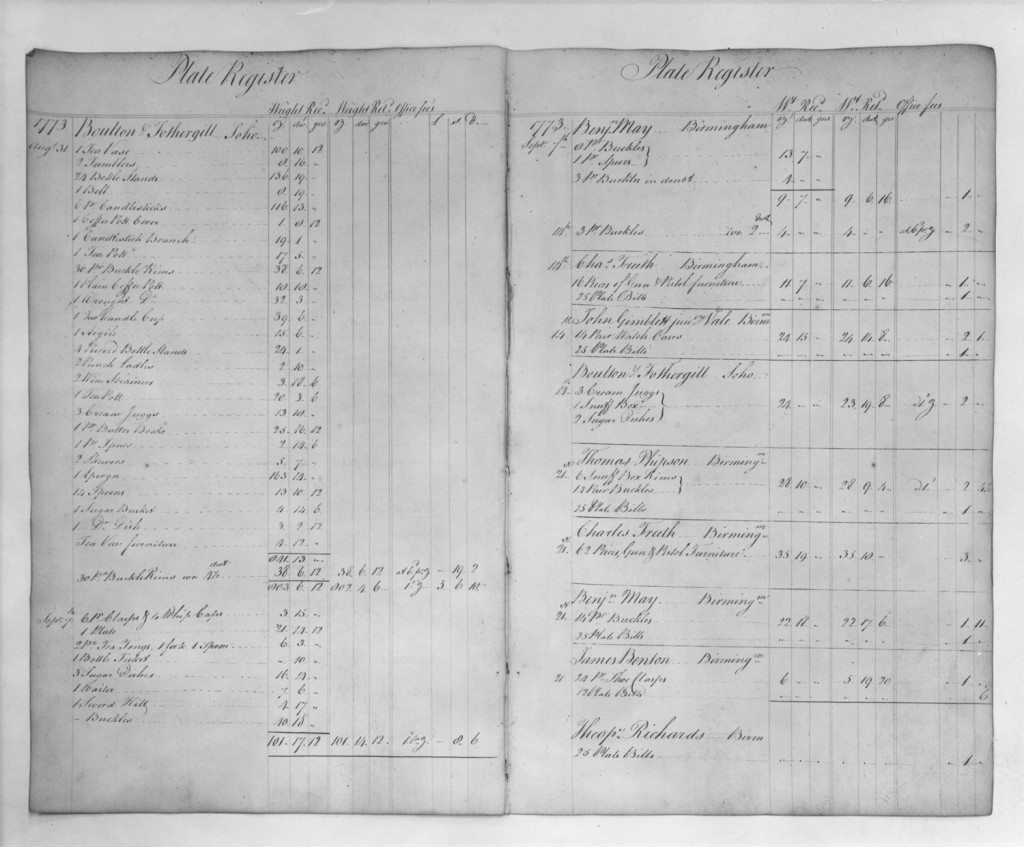 Image: Photograph of first items in the Plate Register of Birmingham Assay Office, 31 August 1773, registered by Matthew Boulton and John Fothergill. The original is no longer available.

Though Matthew Boulton played a leading part in the establishment of Birmingham Assay Office, and was the first maker to register his mark there and take a consignment of goods for assaying and hallmarking, his manufacture extended over a much wider range of metals than just silver.

In his notebook for 17711 he headed page 1 ‘A List of the Articles Manufactured at Soho’ and over the next seven pages carefully noted down the following headings: ‘Buttons’, ‘Chains for Men & Women’,  ‘Buckles’, ‘Boxes, Instrument Cases &c’, Links or Sleeve Buttons’, ‘Candlesticks’, ‘Plated Wares & Braziery’, ‘Belt Locks’, ‘Cane Heads’,  ‘Trinketts’, ‘Tapestry Hooks’, ‘Chapes’ (the ‘working parts’ of buckles), and ‘Watch Hooks & Keys’.

The majority of these (with the exception of candlesticks and plated wares) would come under the heading of toys, and under each heading he listed the range of metals in which they were being made at Soho. The metals include gold, silver, plated metal, gilt, pinchbeck, platina (a white metal alloy, not platinum), steel, and various other alloys. Some are said to be inlaid or decorated with enamel or glass.

Much of Boulton’s toy output, and that of other Birmingham, Wolverhampton, Walsall and Woodstock manufacturers, was in steel. Birmingham directories for the 18th and early 19th centuries list numerous steel toy makers. Even before Soho was built, Boulton was buying steel from Benjamin Huntsman in Sheffield 2, and discussing prices of goods with Timothy Hollis in London3. Writing to him in 1757 about the tendency of other makers to undercut his prices, Boulton commented: “For as I have put my Selfe to a greater expense than any Body else in erecting ye Best Convenience & ye compleatest Tools for ye purpose, methinks I would not let any interloper run away with ye Business…’ He adds that he hopes to merit orders by “superior work”.