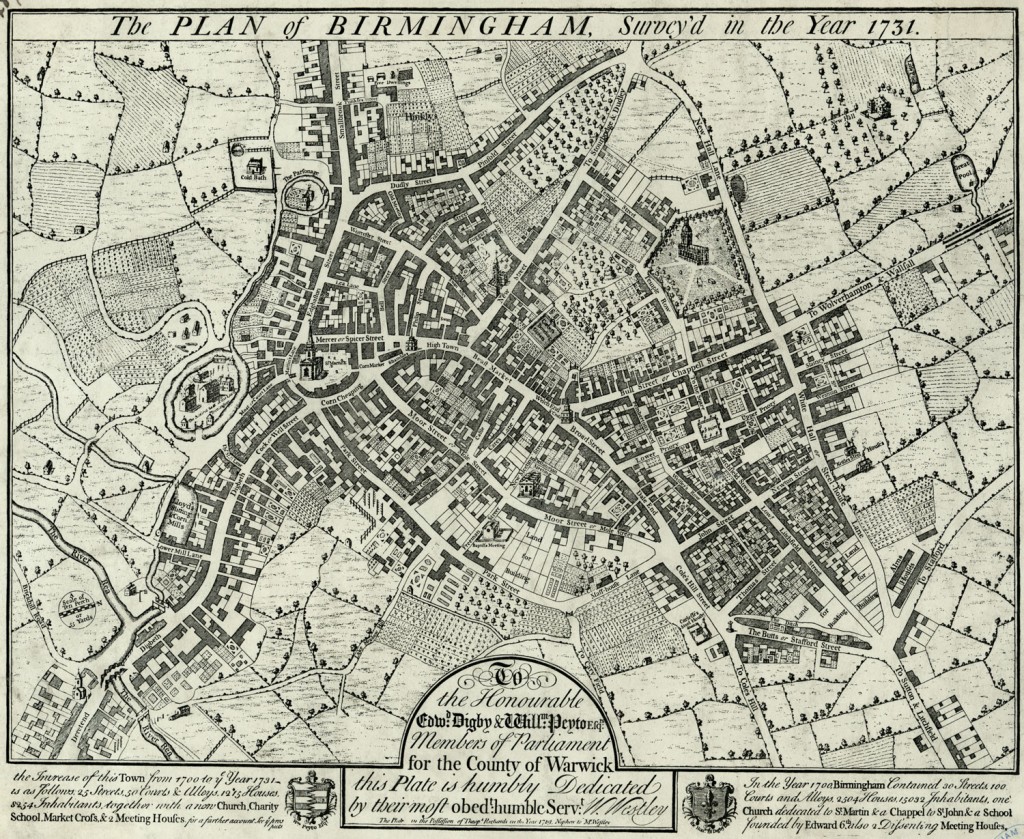 Image: The 1731 town plan of Birmingham bears this dedication: To the Honourable Edwd. Digby & Willm. Peyton Esqs, Members of Parliament for the County of Warwick, this Plate is humbly Dedicated by their most obedt. humble Servt.W. Westley

William Westley was a Birmingham surveyor. He owned land between Dale End and Steelhouse Lane, and on the Plan there is a ‘Westley’s Row’. parallel with Dale End.

The Plan gives some statistics for Birmingham in 1700, and Birmingham in 1731.
In 1700 there were 30 streets, 100 courts and alleys, 2,504 houses, 15032 inhabitants. At that time the number of inhabitants was generally estimated from the number of houses. The important buildings were: ‘one Church dedicated to St. Martin & a Chappel to St. John & a School founded by Edward 6th also 2 Dissenting Meeting Houses’.

By 1731 there were an additional 25 streets, 50 courts and alleys, 1252 houses and 8254 inhabitants. The town was nearly half as big again as it had been 30 years earlier. There was a new church, St. Philip’s, with a charity school in the churchyard. The Prospect drawn by the Bucks brothers in 1731 gives further details about this and King Edward’s School: ‘a Charity School wherein are maintain’d and taught upwards of 50 Boys & Girls; and a Free Grammar School, founded and endow’d with a large revenue by King Edward the sixth now rebuilt in a stately and commodious form.’

Several plots, on Moor Street, Park Street, and Steelhouse Lane, are marked ‘Land for Building’. But there were still cherry orchards – Greenwood’s, between New Street and Pinfold Street, and Walker’s, between New Street and Bull Street. Corbet’s Bowling Green lay next to Walker’s orchard. The open land next to St. Martin’s was then the Corn Market. In 1782 William Hutton recorded the name-change in his history
‘the place which has obtained the modern name of Bull-ring, and which is used as a market for corn and herbs…’ Earlier in the same history, Hutton had written that one John Cooper, in the sixteenth century, had obtained as one of three privileges from the Lord of the Manor: ‘that he should, whenever he pleased, beat a bull in the Bull-ring, whence arises the name…’ 1

1 William Hutton, An History of Birmingham