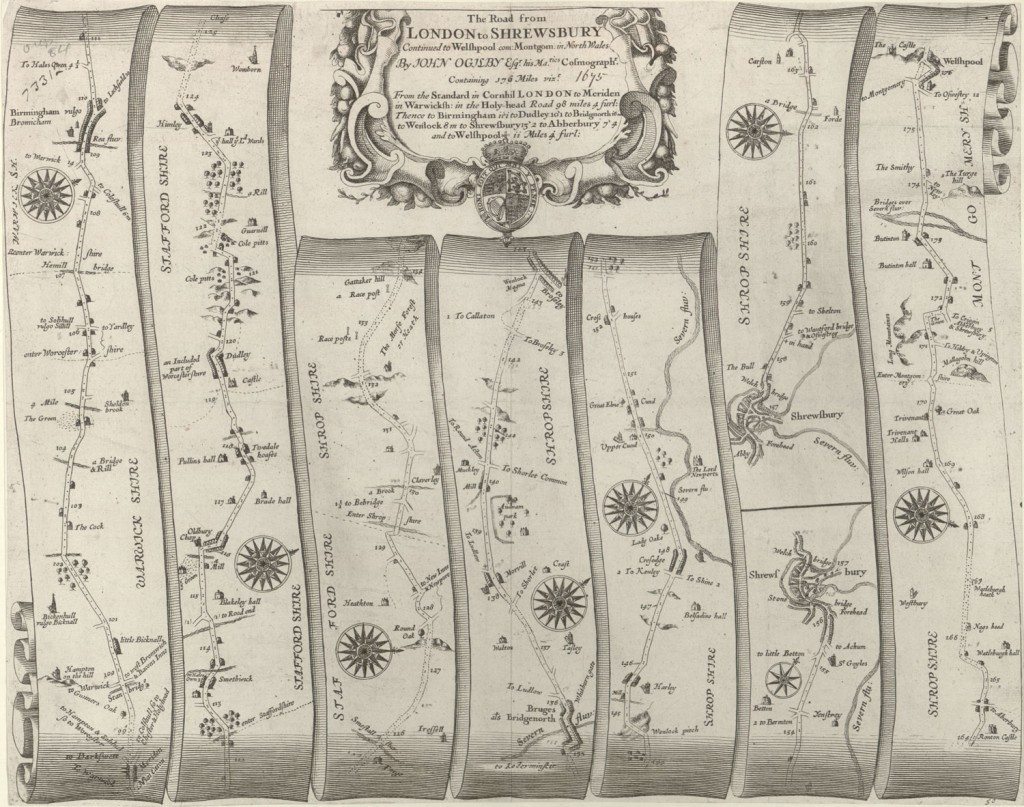 Image:The road-map showing part of the route between London and Welshpool, from John Ogilby’s Britannia, published in 1675. Ogilby was the first to use the statute mile. The orientation is on each section of the road. Towns may have a correct, and a common name: ‘Solihull vulgo Silhill’, ‘Birmingham vulgo Bromwicham’.

In medieval times there had been route-books; some maps showed towns on pilgrim routes, but there were neither precise measurements, nor details to guide the traveller. There were road maps for Germany as early as 1501, but Saxton’s county maps in the 1570s did not include roads.

The first detailed road-maps of England and Wales were produced in 1675, with the publication of Britannia, ‘a Geographical and Historical DESCRIPTION of the principal Roads thereof. Actually Administered and Delineated in a Century of Whole-Sheet Copper-Sculps.’ John Ogilby, 1600-1676, only came to map-making towards the end of his life. First a dancer, then a dancing-master, he was then a manager and director of Dublin’s theatre, returning to England in the 1640s. In the 1650s he translated and published classics such as Aesop’s fables. He set up his own printing shop in London, and produced a series of travel atlases which included both maps and traveller’s tales.

Ogilby desired to map the roads and counties of England and Wales. An advertisement in November 1971 announced that by Royal Command Ogilby was to ‘make a particular Survey of every County’. He received sponsorship from the London Court of Aldermen, and from King Charles II and Queen Catherine. In the Museum of London there is a portrait of the King and Queen receiving Ogilby in Whitehall Palace, taken from Morgan’s map of London, 1682. Ogilby supervised the surveyors, John Aubrey and Gregory King were involved.

Ogilby’s maps are artistic, but they are also practical guides for the traveller. Ogilby had discussed the survey with Robert Hooke, and members of the Royal Society. This brought new standards of measurement, precision and verification. Hooke suggested that hills should be shown by lines sloping upwards on ascent, and downwards on the descent. There were town plans for larger towns. At the time of the map above Birmingham was a small market town, Shrewsbury was larger, important because of its position near the Welsh border. Specific landmarks are shown to help the traveller; ‘Cole pitts’ near Dudley, ‘Gunners Oak’, ‘Lady Oake’ and ‘Great Oak’ on different sections of the route.