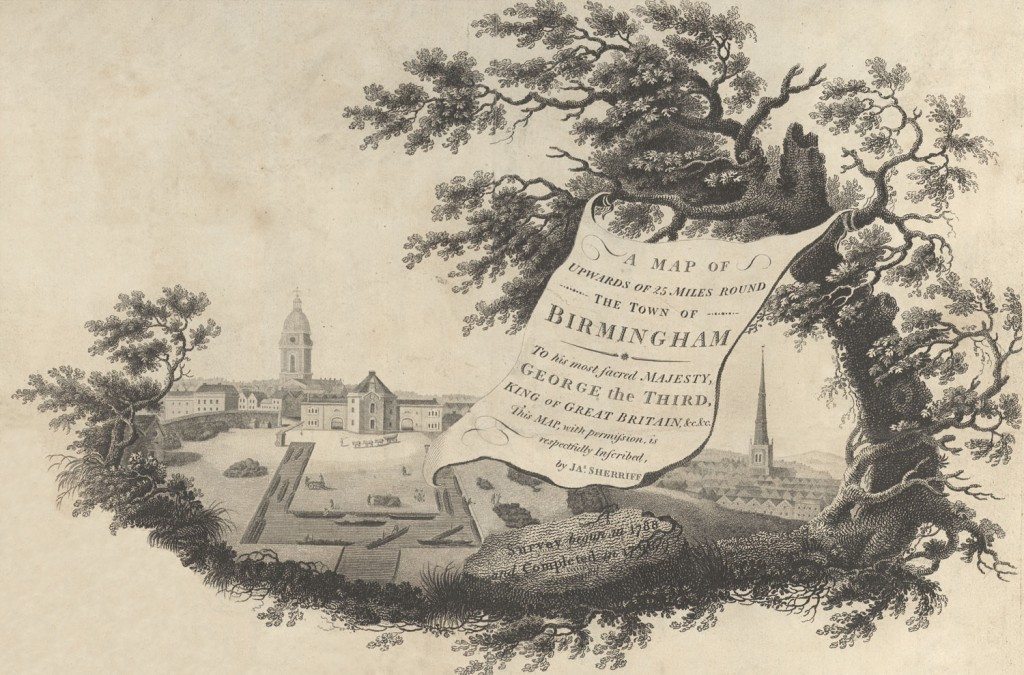 Image: Cartouche from James Sherriff’s map of the area for 25 miles around Birmingham, 1798.

The cartouche uses the conventions of eighteenth and early nineteenth century maps of cities. As was often the case, there are pictures of the most significant churches, St. Philip’s on the left, in the modern part of Birmingham on top of the hill; St. Martin’s on the right, lower down, surrounded by houses. There is a framework of a tree and leaves, also a convention. But St. Philip’s lies in the background, in the foreground there are wharves, canals and barges, loading coal. There is also a small figure, leading horses. The scroll with the title hangs down between the two churches, disguising the fact that in reality they could not have been seen in such proximity.

In the 1570s, Christopher Saxton, a Yorkshire surveyor, was commissioned to produce the first detailed survey of England and Wales. Elizabeth I granted Saxton the lease of lands in Suffolk, because of the ‘grand charges and expenses lately had and sustain’d in the survey of divers parts of England’. Her chief minister, Lord Burghley, used maps extensively for administration and there are copies of Saxton’s county maps with his annotations.

Over the next two and a half centuries there were changes in the economy and society of the country, and these changes were reflected both in the landscape, and in maps. In 1700 one person in six lived in a town, by 1800 this had doubled to one person in three. Birmingham grew from a small market town on the edge of Warwickshire to one of the major towns in the country. As scientific accuracy came to be more highly valued and new technology meant better tools for surveying. By 1830 there was a substantial middle class who could afford to buy maps. Some were produced as luxury items as well as guides.

All maps on these pages are held in the Local Studies and History section of Birmingham Central Library. I would like to thank Richard Abbott, the maps librarian, for his advice.