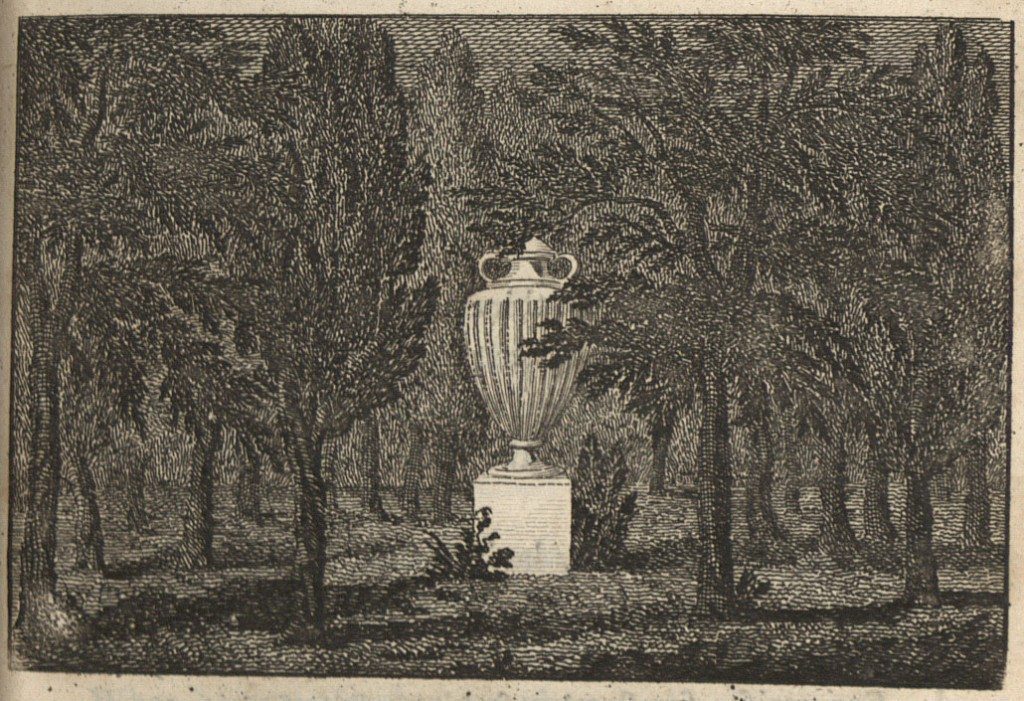 Image: Engraving of a classical urn set amongst trees accompanying ‘Elegies, written on many different Occasions’ by William Shenstone in The Works in Verse and Prose of William Shenstone, Esq., Vol. I, Second Edition (London, J Dodsley, 1765) p 11.

8. Shenstone’s Embellishments to the Leasowes

Embellishments to the Leasowes are frequently reported to friends. The following few examples, from his Letters, are mostly to Lady Luxborough, and written between 1747 and 1749,

“I’ve made a great Improvement in Virgil’s Grove…& have finished a new Path from it to ye House.” (p.114)

“My Gothick Building is now completed…The Ground about it is turfed;…a new Path is made to it…by…this Path is a little rock with a tree, yt I think is picturesque. The Floor of it is pav’d…with black and white Pebbles; & considering how hastily I collected & dispos’d them, has a pretty good Effect.” (p.207)

“I have made two little Islands in ye stream that runs thro Virgil’s Grove; The stream appears considerably larger, and the ground is mended.” (p.233)

“…also an Urn…And…small as it is, It has…a charming Effect, from ye situation I have given it…The Inscription I design for it.” (p.240)

Lady Luxborough is also informed of the conversion in Shenstone’s old house of a kitchen into a parlour. After giving structural details, including precise measurements, Shenstone writes:

“the other…Room…As you enter into this last, the Point of Clent-Hill appears visto-Fashion thro’ ye Door & one of ye windows. The same will be reflected in a Peer-glass at ye End of the former Room.” (p.179)

A ‘visto’ or ‘vista’ was a narrow, distant view (while a ‘prospect’ was a wide, extensive view). Attention to such minutiae can be seen as part of that most discriminating taste for which Shenstone was admired, and because of which the Leasowes came to be so much visited.

In the extant correspondence, Shenstone frequently advises Luxborough, in great detail, and often at her request, on improvements to her grounds and house; she, very occasionally, offers him advice. The following extracts are selected from letters to Shenstone from Luxborough between 1748 and 1750. 10 She writes,

“I beg the favour of you to send me the height and thickness of your wall that has arches sunk in it; and the depth, breadth and height of these arches; and let me know whether they are plaistered on the inside, and if any ornament is on the top, or only a coping: it is to build in summer a bit of wall (as you advised) to skreen me from the cottage that is contiguous to my garden…” (p.15)

“Mr. Williams, Painter…has finished my chimney-piece, which he hopes will not be disapproved by you, Sir, to whom I owe the idea of it.”

“…thank you for your little sketch of alterations in my Shrubbery. In order to follow it, I have begun by taking down the styles” (p.95)

“I long for your contriving the entrance into my grotto.” (p.111)

“I have pursued your scheme of joining my kitchen-garden to my Coppice…” (p.220)