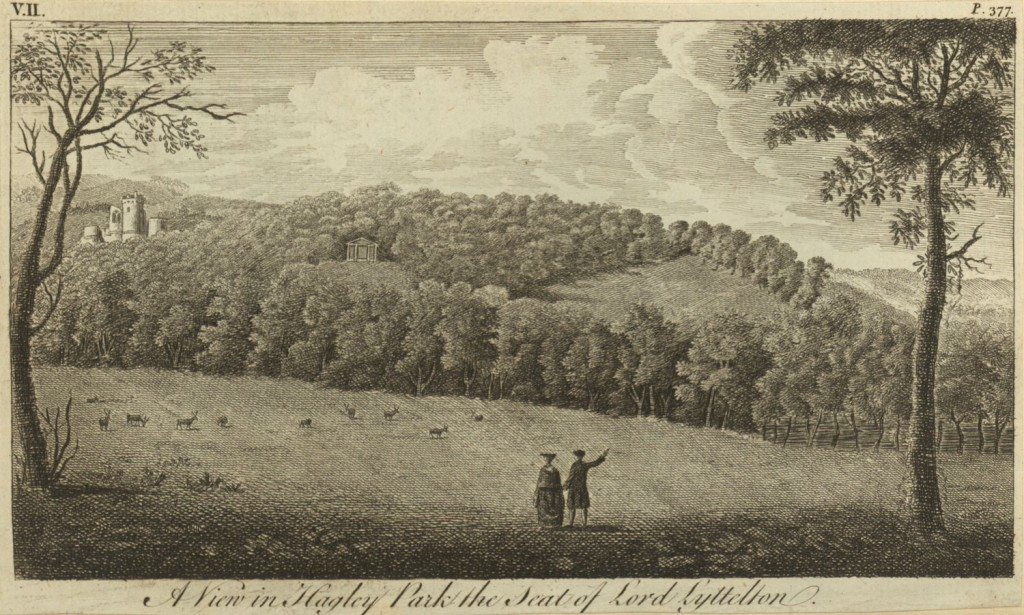 Image: An engraving of Hagley Park, showing a Gothic folly and Greek temple at Hagley with deer grazing in the foreground. The architect Sanderson Miller (1717-1780), rebuilt Hagley Hall and remodelled the park for Lord Lyttleton in the 1750s. Like Shenstone, Miller introduced classical and gothic buildings into the landscape. Shenstone and Miller met and may well have influenced each others designs. From R W Boodle, Worcestershire Scrap Book, vol. II (1903) held in Local Studies and History, Birmingham Central Library.

As we are concerned particularly with Shenstone and landscape gardening, we might here ask, how original, how innovative, and how influential was Shenstone in this field? Yet before considering these points, a very brief overview of English gardening in the first half of the eighteenth century, and possible influences on Shenstone, would seem appropriate.

For the latter part of the seventeenth century and into the eighteenth, many of the gardens attached to grand, usually rural, houses in England tended to be in the very formal, geometrical French style, a prime example of which is the parterre still to be seen immediately behind the Palace of Versailles. A second, similar style favoured at this time was the Dutch, also geometrical and formal, and not always easily distinguished from the French. As a reminder that change can be gradual, can occur at different speeds in different places, can be accepted or rejected, is this extract from a letter written by a friend to Shenstone in 1759,

“In going to Hampton Court I met with little or nothing curious or entertaining…The Gardens are all in the Dutch Taste, with Evergreens and strait Canals, and some fine Brass Statues interspersed; there is a Terrass by the Side of the Thames a great Length, with a Wall on one Side, and Iron Pallisades on the other.” 6

Among those very grand places where, through the eighteenth century, the lines and designs of parks and gardens were gradually softened, altered (even to the extent of demolishing a village if it spoiled a view), and made to seem, in parts, somewhat more ‘natural’, were Chiswick, Stowe, Blenheim and Chatsworth. The owners of these estates employed such successful garden designers as Charles Bridgeman, William Kent (a painter, friend of Alexander Pope, and important innovator), Capability Brown, and, late in the century, Humphry Repton.

A contemporary contrast to such as Blenheim and Chatsworth was the five-acre garden, with its famous grotto, of the poet Alexander Pope. This was at Twickenham, to where Pope moved in 1718. Like Shenstone, Pope was his own designer, but perhaps did more practical gardening than Shenstone. One of the few busts Shenstone chose to display in his house was of Pope.