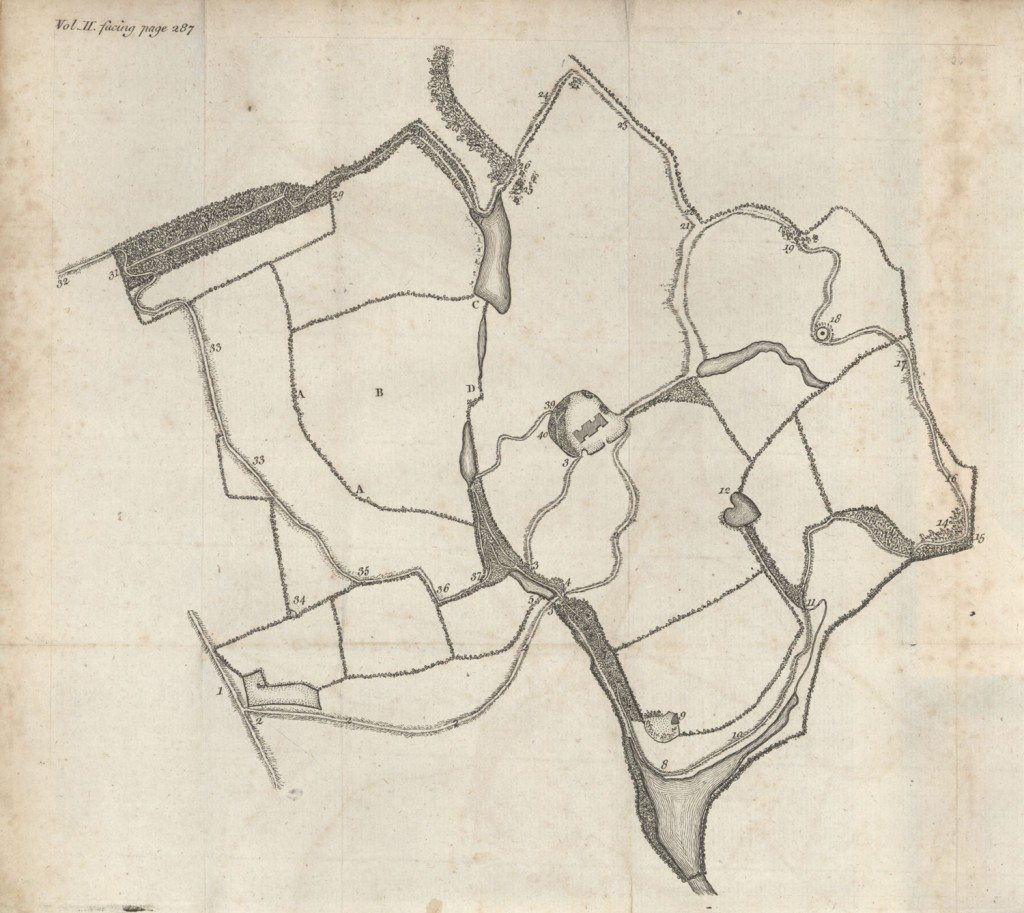 Image: Map from ‘A Description of the Leasowes, the Seat of the late William Shenstone, Esq’,

1.  Great road from Birmingham to Bewdley
2.  Ruinated wall with a small gate within an arch
3.  The house
4.  Small gate at the bottom of a “fine swelling lawn”
5.  The Priory Gate
6.  Seat “beneath a ruinated wall”
7.  Small seat near “a sloping grove”
8.  Water feature at the bottom of a valley filled by “a brawling rivulet”
9.  The Priory, the folly which Shenstone created within the estate
10. A common bench “which affords a retiring place”
11. Seat “beneath a prodigiously fine canopy of spreading oak”
12. The cascade “where the eye is presented with a fairy vision”
13. A “natural bower of almost circular oaks”
14. Statue of “the piping faun”
15. Striking view of the Priory
16. Path leading “by an easy ascent to a small bench”
17. Small bench “where the circumjacent country begins to open”
18. Octagonal seat “overarched…by firs”
19. Small thicket
20. Gothic alcove
21. Entrance to “a new theatre of wild shaggy precipices”
22. Seat “under a spreading birch”
23. Small bench “near a scene of hanging woods and shaggy wild declivities”
24. Seat which commands a view of “the town and spire of Hales”
25. Seat in “the center (sic) of a noble clump of stately beeches”
26. The Lover’s Walk
27. The Assignation Seat “beneath a spreading beech”
28. Ornamented urn inscribed to Miss Dolman
29. Steep ascent with “a rough scene of broken and furzy ground”
30. Lofty Gothic seat with a view of Clent Hill
31. A rustic building known as the “Temple of Pan”
32. Seat on a “high natural terrace” with a view of all previous scenes
33. View of Frankley Beeches, next to Hagley Hall, the seat of the Lytteltons
34. Gothic screen “backed with a clump of firs”
35. Seat which “presents a beautiful view up a valley”
36. Down hill with a view of a cottage on very high ground
37. Seat with a view of the valley with gliding water
38. Descent to Virgil’s Grove
39. Ascent and entrance to the shrubbery surrounding the house
40. Seat inscribed to Richard Jago, one of Shenstone’s friends

Although the London-based Robert Dodsley had published earlier works by Shenstone, it was not until 1754 that the publisher visited the Leasowes.   This occurred when Dodsley, in Birmingham for matters of business and pleasure with his friend John Baskerville, the type-founder and printer, was taken by Baskerville to meet Shenstone.   The resultant poem, ‘Verses by Mr Dodsley’, on his first arrival at the Leasowes, 1754, begins, ‘How shall I fix my wandering eye?  Where find / The source of this enchantment?’   This poem and Luxborough’s ‘Written at a Ferme Ornee, near Birmingham; August 7th, 1749’ are among the few poems on Shenstone and his place reprinted in Volume II of Shenstone’s Works in Verse and Prose.   But both during his lifetime and after his death very many poems were written in praise of Shenstone’s Arcadia.

In the same volume as Dodsley’s Verses is ‘A Description of the Leasowes’.   This, usually credited to Robert Dodsley, runs to thirty-five pages.   On the accompanying plan are marked forty points at which to stop in order to admire or consider the immediate scene or some near object or inscription, or a more distant vista or prospect.   Here a few lines from this Description must serve,

‘…now…into a part of the valley…tall trees, high irregular ground, and rugged scars.  The right presents you with, perhaps, the most natural…of the many cascades here found: the left with a sloping grove of oaks; and the center, with a pretty circular landskip appearing through the trees, of which Hales Owen steeple, and other objects … form an interesting part.  The seat beneath the ruinated wall has these lines of Virgil inscribed,’ (Works in Verse and Prose, Vol. II, p.290)

The recommended route winds around and through the ferme ornee, with point 40 being near to the house, in the centre.   Natural advantages of the site include: hills, valleys, woods, rocky outcrops, natural springs, streams, and pleasant distant views.  From Shenstone’s writings and Dodsley’s Description, it is clear that, ideally, each individual spot is to be appreciated by each walker for its (‘improved’) natural beauty and any outlook, and also that each person should realize they stop at different points in the ‘landscape’ – but also that they progress, move through, that landscape.  It is intended as an aesthetic, philosophical, moral journey.