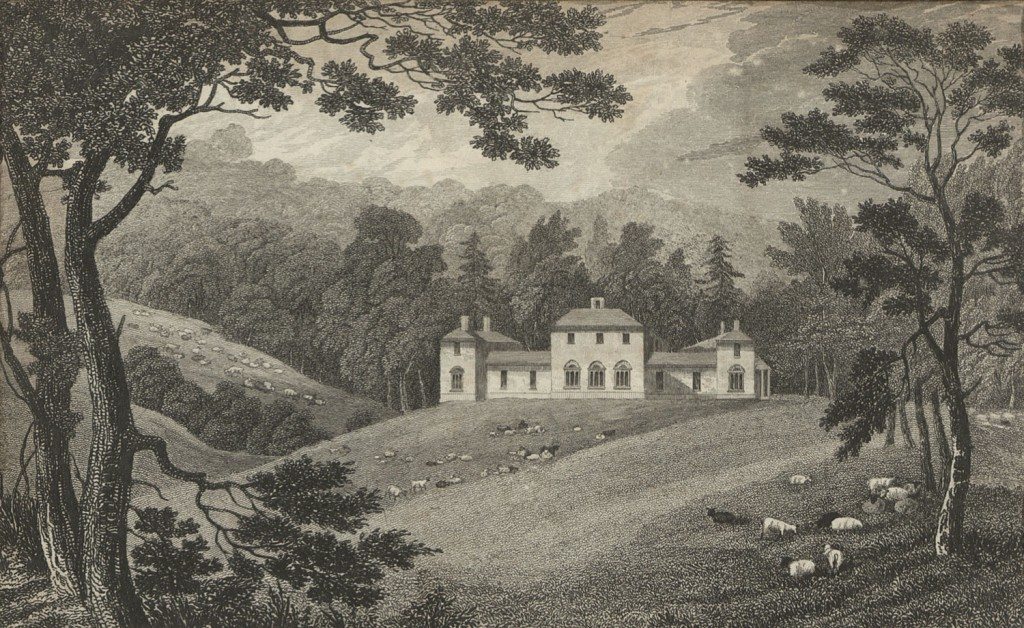 Image: This engraving of the remodelled Leasowes reveals the combination of the practical activity of farming, in this case, raising sheep, with landscape design. The house itself is artfully located on a hill and amongst trees whilst the sheep graze in the foreground. Engraving on the inside back cover of The Works in Verse and Prose of William Shenstone, Esq., Vol. I, Second Edition (London, J Dodsley, 1765).

Among reasons for Shenstone being interested in landscape gardening were that it was becoming fashionable among people of ‘taste’, and that he had the opportunity himself to be creative. But at the time he began to ‘embellish’ the Leasowes, there were very few (if any) other places, even small ones, being so ‘naturally’ and meticulously designed, yet with such minimal detectable interference. Graves notes that Shenstone’s interest was initially aroused at Mickleton, whose owner had begun to attempt a few of the things being done by Philip Southcote. And also,

“Something of the same kind…had…been begun at Hagley also…but on so large a scale, and in so magnificent a style, as not to raise in Mr. Shenstone the least idea of imitation.” (Recollection, pp.48-50)

Joseph Spence, who for many years helped his friend Alexander Pope in his Twickenham garden, was one of those who in the eighteenth century wrote on gardening. (And, significantly, later visited the Leasowes and asked detailed advice of Shenstone.) The 1966 editor of Spence’s Observations, Anecdotes, and Characters of Books and Menwrites that, ‘Philip Southcote (1699-1758)…was renowned for introducing the ferme ornee style at Woburn Farm, near Weybridge, Surrey.’ Also, that this style, ‘consisted of combining the practical activities of farming, raising cattle and sheep, with the beautification of the borders, paths, and non-functional areas’. 8 Marjorie Williams notes that William Mason, in his 1770s’ poem ‘The English Garden’, ‘extolled Southcote and Shenstone as inventors of the ferme ornee’ (Letters, p.389).

“The French have what they call a parque-ornee; I suppose, approaching about as near to a garden as the park at Hagley. I give my place the title of a ferme ornee;” (Letters, p.156)

And in his ‘Prefatory Essay on Elegy’ Shenstone writes of himself,

“The author of the following elegies … has a right to consider himself a real shepherd. The flocks, the meadows, and the grottos, are his own, and the embellishment of his farm his sole amusement.” 9