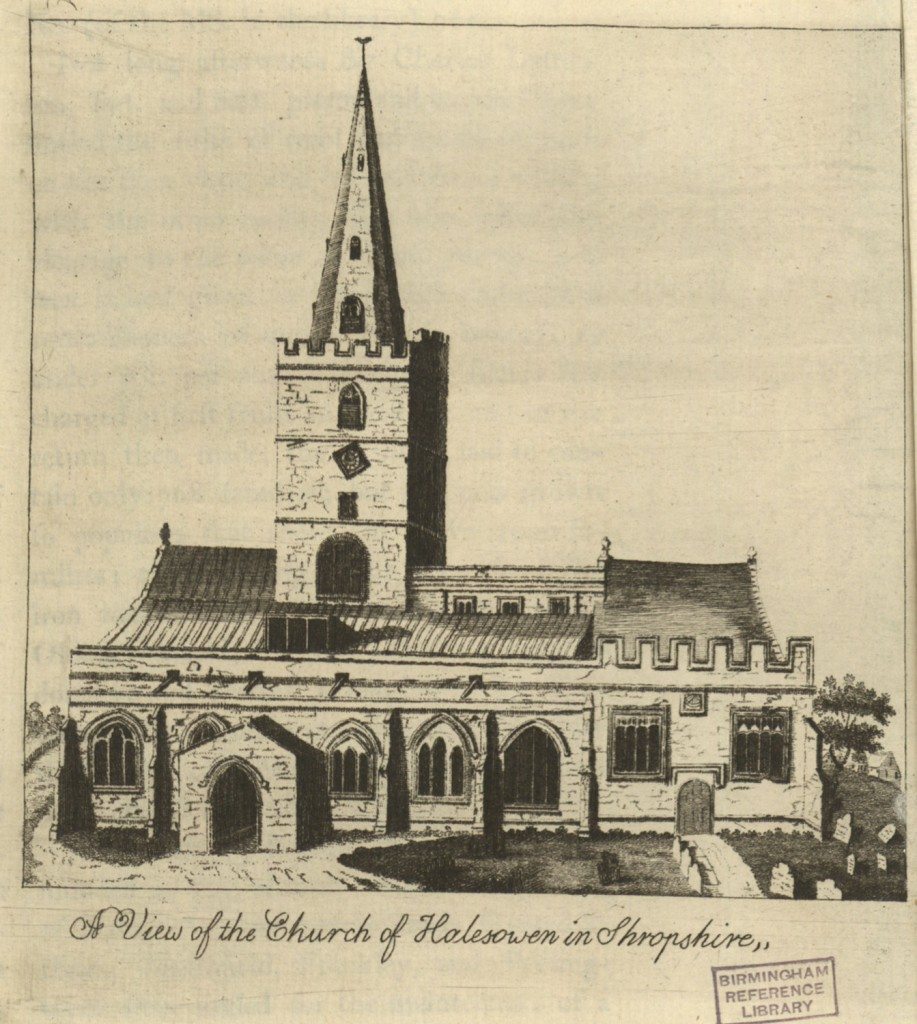 Image: A View of the Church at Halesowen in Shropshire. Shenstone was interested in the affairs of the parish and led the efforts to acquire four new bells for the church.  Shenstone was buried in the churchyard in 1763, where his gravestone remains.  From T R Nash, Collection for the History of Worcestershire, vol 1 (John Nichols et al, Oxford, London and Worcester, 1781), Local Studies and History, Birmingham Central Library.

Among Shenstone’s other interests was the theatre, whose purpose, he believed, should be to instil moral virtue through the medium of delight (e.g. Letters, p.566).   He sometimes attended summer season performances at the King Street Theatre in Birmingham, which his friend Thomas Hull sometimes managed.   In 1761, having seen a tragedy the previous evening, Shenstone wrote to Hull and detailed how the play could be improved (Letters, p.584).   Shenstone and Hull also collaborated on other literary projects.

When he attended the theatre, Shenstone sometimes stayed overnight with a cousin in Birmingham.   While he obviously much preferred his rural idyll and communications and visits with his genteel and literary friends, he did have some dealings with the town.  In the way of business, for example, in 1744 he arranges to purchase ‘an elegant pair of pistols from Birmingham’ (Letters, p.86).   In 1748 he ‘requested a very ingenious Builder from Birmingham’ to call upon him (Letters, p.170).   In 1752 he buys ‘toys’ from the town (Letters, p.330).   Sometimes letters and parcels, particularly to and from Luxborough, are left with ‘Mr. Williams, painter in New Street’, who had done painting work for both her and Shenstone.   And among friends and acquaintances in the town are John Baskerville and

Matthew Boulton.   There are aspects of Birmingham Shenstone dislikes:

“…the vulgar are more struck with arms than any thing…there were near two hundred people gathered round Lady Luxborough’s landeau at Birmingham, and declaring her arms to be very noble…I do not…chuse to employ a vulgar mind about this matter…” (Letters, p.365)

Nor are the ‘common’ people all he dislikes of the town’s streets.  In 1750 he complains of ‘the tediousness of riding two or three Miles on Pebbles thro’ ye Town’ (Letters, p.278).

In contrast, with regard to roads, and other matters, in 1753 he is pleased to inform Graves:

“We are going to add two new bells to our present set of six; to have a turnpike road from Hagley to Birmingham, through Hales[owen]; and to emerge a little from our obscurity.” (Letters, p.356)

The last comment recognises the importance he attributed to a well-made road for a rural community. The reference to bells is to those of Halesowen parish church. Shenstone had been instrumental in persuading people in the area to contribute to the bells fund.

Bells, ‘my four bells’, also feature in several letters of 1758 from the poet to the entrepreneurial Matthew Boulton, at this time still ‘on Snow-hill, Birmingham’.   In these same few letters there are several references to pineapple ‘corner Ornaments’ which Shenstone commissioned for his post-chaise.   Shenstone seems to have designed these ornaments:

“Mr. Green did not shew me ye Pattern before Monday last, when I found it expedient to alter ye delicacy of my first draught…Mr. Boulton will see my Intention” (Letters, p.489)

Shenstone asks to see the cast ornaments prior to them being gilded.   Subsequently, he is to ‘bespeak a sett for Mr. Knight’ but proposes that Boulton make the ‘Leaves or lower part of the Fruit…a little fuller & more plain’ (Letters, p.493).  On 30th September, 1758, Shenstone asks that Boulton send him ‘two or three pair of shoes and knee-buckles, for Choice’.   At this point in the century, shoe and knee-buckles were still very fashionable and their production provided employment for large numbers of people in the town.   Among non-business matters in these same letters, Boulton is offered ‘a Pair of Guinea-fowl’, of a breed different from those he already has, from among the many types of bird kept by Shenstone for decoration and for the table.   And Boulton is invited to the Leasowes.