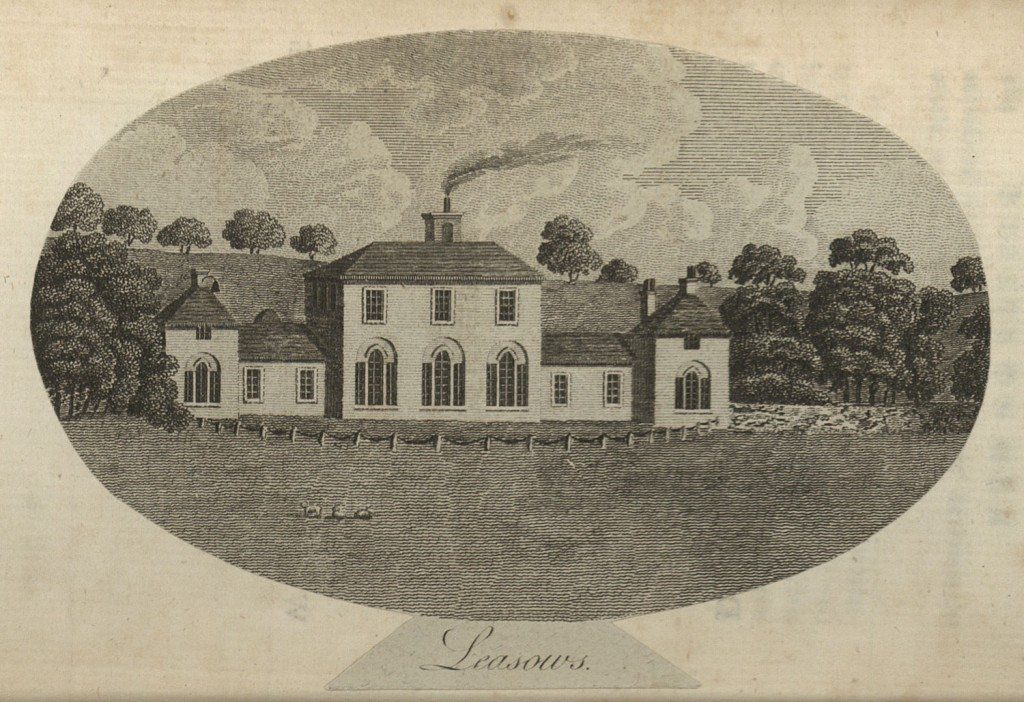 “…they observed a Gentleman in his own hair…the now celebrated Mr. Shenstone, whose place began to be frequented by people of distinction from all parts of England, on account of its natural beauties, which, by the mere force of genius and good taste, Mr. Shenstone had improved and exhibited to much advantage. And this had discovered to the world his own fine poetical talents and polite learning, which, from his modesty, would otherwise probably have been buried in solitude and obscurity…”

“He showed [his old friend] his cascades, which are so deservedly admired…the prospects of the country from various points of view; his grove, dedicated to Virgil, his urns, his statues, and his admirable inscriptions. He mentioned several people of…the first taste, who had done him the honour to visit his place.i 1

The above extract, from a novel of 1774, written by one of his friends, offers a partial but reliable depiction of the real William Shenstone.

His ‘place’ was the Leasowes, a small grazing farm (perhaps something around one hundred acres) close to Halesowen. This area is now within the borough of Dudley, and close to the current western boundary of Birmingham. In the eighteenth century, although geographically separated from it, the Halesowen area was part of Shropshire.

1 Richard Graves, The Spiritual Quixote: or, The Summer’s Ramble of Mr.Geoffry Wildgoose. A comic Romance. In 3 Volumes. 2nd edition (London J. Dodsley, 1774) p 23-25.
Shenstone was unconventional in that, unlike other ‘gentlemen’ of his time, he chose not to wear a wig. In contrast to the peaceful pastoral of the Leasowes, a few pages further on (32-33), as Wildgoose and his companion ‘walked through Birmingham streets, they heard…fellows in a workshop, up two pair of stairs, quarrelling, swearing, and cursing,…Wildgoose, thinking…to reprove their profaneness,…called out…The litigants…redoubled their oaths and imprecations on the Preacher; and one of them emptied the stale contents of an unscowered piss-pot full upon the heads of him and his companion.’