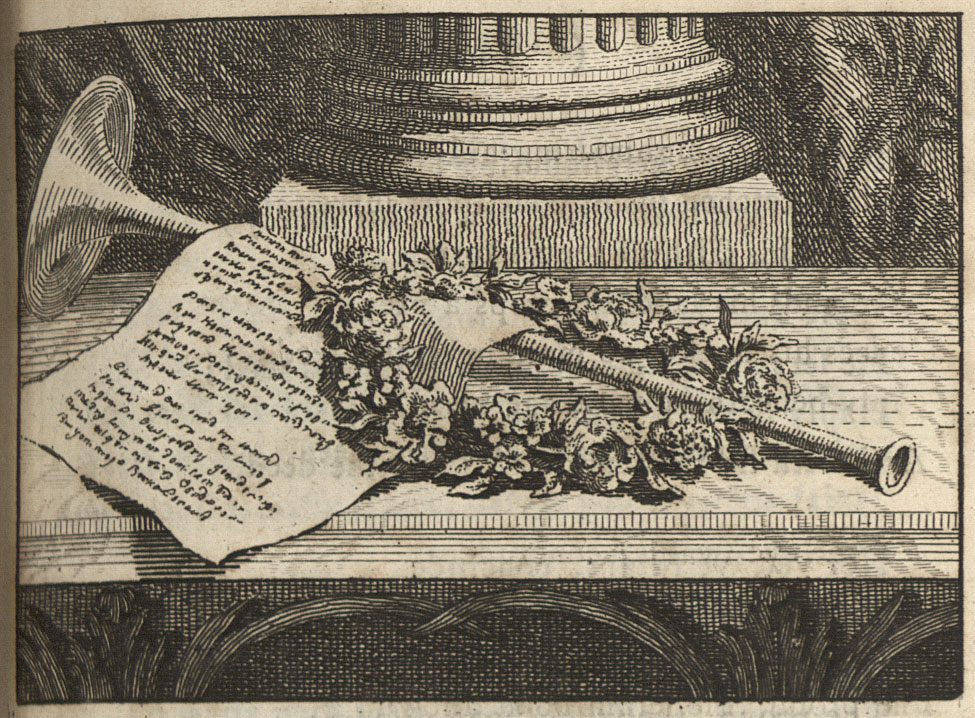 Image: Illustration accompanying the poem, ‘Rural Elegance, an Ode to the late Duchess of Somerset’, by William Shenstone in The Works in Verse and Prose of William Shenstone, Esq, Vol. I, Second Edition (London, J Dodsley, 1765), p 111.

Even when not landscaping the Leasowes, Shenstone the poet could combine his
favourite ‘amusements’ and design in imagination. For example, he wrote to Graves in 1743:

“My favourite scheme is a poem, in blank verse, upon Rural Elegance, including cascades, temples, grottos, hermitages, greenhouses…The next, running upon planting, & c. will end with a vista terminated by an old abbey.” (Letters, pp.62-63)

The poem ‘Rural Elegance, an Ode to the late Duchess of Somerset’ was eventually published. The Duchess of Somerset was a friend of Henrietta Knight, Lady Luxborough, of Barrells, Ullenhall. From their first meeting, in 1739, until her death in 1756, Luxborough and Shenstone were firm friends and frequent correspondents. Like Shenstone, Luxborough was interested in developing and improving her house, grounds and farm. And, like several others in their circle, she wrote verse. She also, over many years, recommended Shenstone and his Leasowes to her grander friends and acquaintances, including the Duchess of Somerset.

On 1st March 1744, Shenstone informs Richard Jago, then curate of Snitterfield in Warwickshire: ‘I am taking part of my farm upon my hands to see if I can succeed as a farmer’ (Letters, p.88). A few months later Shenstone reports that he is, ‘pulling down walls, Hovels, cow-houses, etc’ (Letters, p.91). This same year the new farmer enthuses to Jago,

“My wood grows excessively pleasant…I have an alcove, six elegies, a seat, two epitaphs (one upon myself) three ballads, four songs, and a serpentine river, to shew you when you come…I am raising a green-house.” (Letters, p.93)

From now until his death in 1763, Shenstone would, apart from visits to various friends in the Midlands, spend the remainder of his life, and more money than he could sometimes afford, on his beloved Leasowes.

Richard Graves had published his Recollection of William Shenstone in 1788, mainly in defence of his late friend against what he, Graves, considered the undue criticism, error, and under-valuing of Shenstone and his works by Samuel Johnson in the latter’s Lives of the Poets (1779-81). Johnson, however, who visited the Leasowes in 1777, did allow that Shenstone had,

“with such judgment and such fancy…made his little domain the envy of the great, and the admiration of the skilful; a place to be visited by travellers, and copied by designers.” 4

Even so, Shenstone’s champion insisted,

“although…since…many places [have been] improved …, and many elegies and pastoral ballads written in Mr. Shenstone’s style; yet, I think, he has a title to more notice for the merit of originality, in both these respects, than some people have vouchsafed to allow him.” (Recollection, p.8)