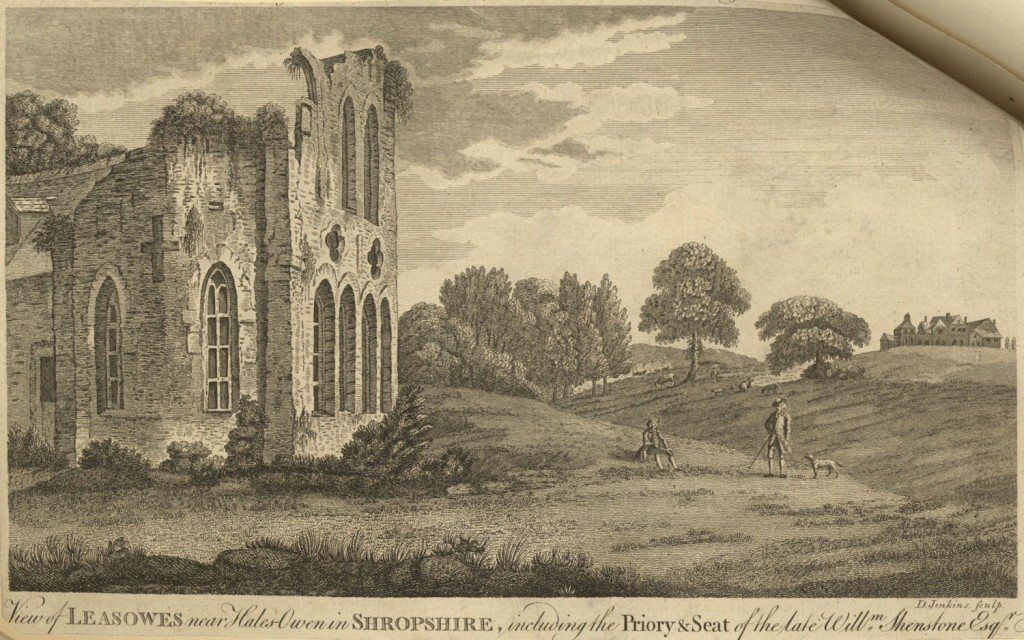 Image: An engraving of Shenstones’s Leasowes showing the house on top of the hill to the right and the Priory in the foreground on the left, which he constructed in the grounds. The image, if it is an accurate representation, shows the farm before substantial alterations were made. The original date and creator of the engraving is unknown. From R W Boodle, Worcestershire Scrap Book, vol. II (1903) held in Local Studies and History, Birmingham Central Library.

Born at the Leasowes, then his father’s farm, in 1714, Shenstone left there as a boy. About 1736 he left Oxford without having taken a degree and lived for a time at a house belonging to his late mother’s family before returning, as owner, to the Leasowes, where, initially, he lodged with the tenant farmer. Over the next few years he made prolonged visits to London and to the family home of his friend Richard Graves in Mickleton in Gloucestershire. He also visited Bath, Cheltenham, and the Welsh borders.

While Shenstone did not settle full-time at the Leasowes until after 1741, by 1740 his letters already include reference to his housekeeper there.2 Another letter of the same year, to Mr. Reynolds, includes: ‘I shall be glad to employ you and Mr. Jago in my little rivulet before winter comes’(Letters, p.13). Reynolds and Jago, both clergymen friends of Shenstone, are, it seems, being invited to help on a project begun previously. Indeed, the Reverend Richard Graves, in his Recollection of William Shenstone, notes:

“He had already on his first coming to board with his tenant at the Leasowes cut a straight walk through his wood, terminated by a small building of rough stone; and in a sort of gravel or marl-pit, in the corner of a field, amongst some hazels, he had scooped out a sort of cave, stuck a little cross of wood over the door, and called it an hermitage; and a few years after, had built an elegant little summer-house in the water, under the fine group of beeches.” 3

2 The Letters of William Shenstone, Arranged and Edited with Introduction, Notes and Index by Marjorie Williams (Oxford, Basil Blackwell,1939) p 11.
This volume has been drawn on heavily for this article.

3 Richard Graves, Recollection of some particulars in the Life of the late William Shenstone, Esq., in a series of Letters from an intimate Friend of his to —–, Esq. F.R.S.(London, J. Dodsley, 1788) p 51.