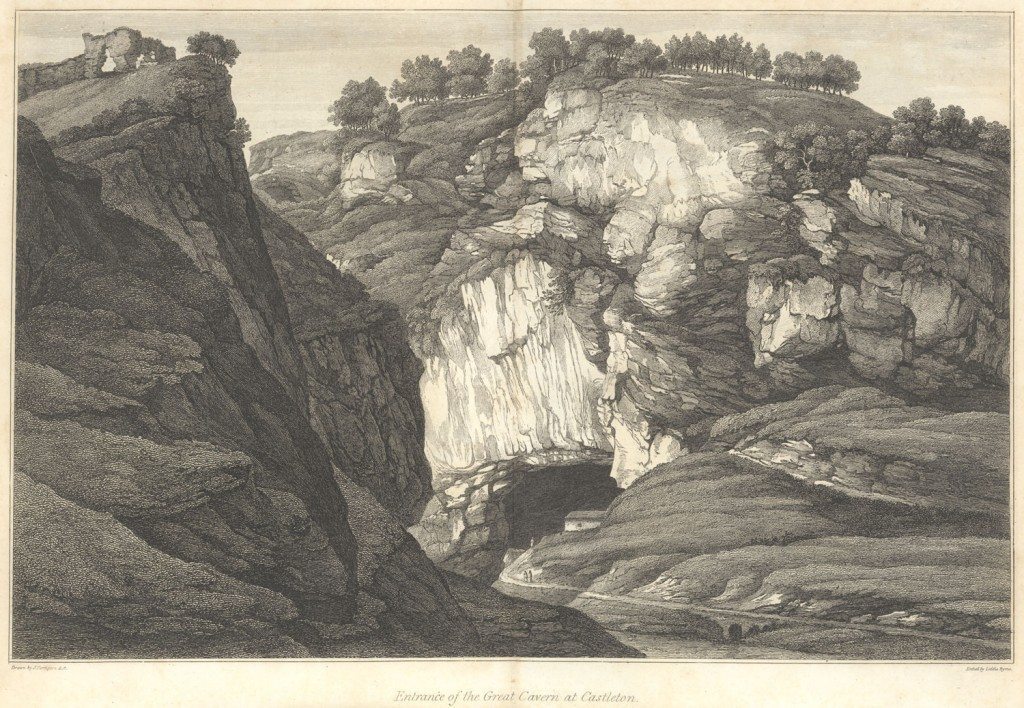 Image: Entrance of the Great Cavern at Castleton, Derbyshire. This is an example of the type of limestone cavern that impressed visitors and potential visitors to Derbyshire in the 18th century such Samuel Johnson. Rev Daniel Lysons and Samuel Lysons, Magna Britannia, being a Concise Topographical Account of the Several Counties of Great Britain, Volume the Fifth containing Derbyshire, (London, T Cadell and W Davies, 1817)

Johnson realised how extensive the fields of art and manufacture were, and in his Preface to the English Dictionary, he admitted a failure of his original intention: “I could not visit caverns to learn the miner’s language, nor visit the warehouses of merchants and the shops of artificers, to gain the names of commodities, utensils, tools, and operations of which no mention is found in books.  (Works, v: 44). His Diaries and Letters show that during that last twenty years of his life Johnson travelled frequently, taking stock of the changes that were taking place over the country, equally amused by the physical beauty of nature and the ingenuity of the human spirit. His desire for learning through first-hand observation extended to all areas of human life. Whether he was calling at the salt mine at Nantwich, the silk mills at Congleton and Macclesfield in Cheshire; testing the medicinal waters in Buxton and investigating the limestone cavern at Poole’s Hole in Derbyshire; or visiting the copper and brass works in Holywell in Flintshire during his tour of England and Wales with the Thrales in 1774, Johnson was courting “living information”.

Johnson’s interest in the processes of manufacture was in tune with the ethos of the Society for the Encouragement of Arts, Manufacture and Commerce whose member Johnson was from 1756 to 1762.  Founded in 1755 by William Shipley, a drawing master, the Society of Arts was one of many technical societies set up to study the progress that was being made in trade, commerce and the industrial arts.  The utilitarian ideals of the Society were expressed in the system of premiums and medals offered to those who contributed to the advancement of agriculture, chemistry, manufactures, mechanics, and the arts. The exploitation of British minerals was particularly encouraged. As a member, Johnson often included excerpts from its proceedings and reviews of new methods of production in The Literary Magazine.