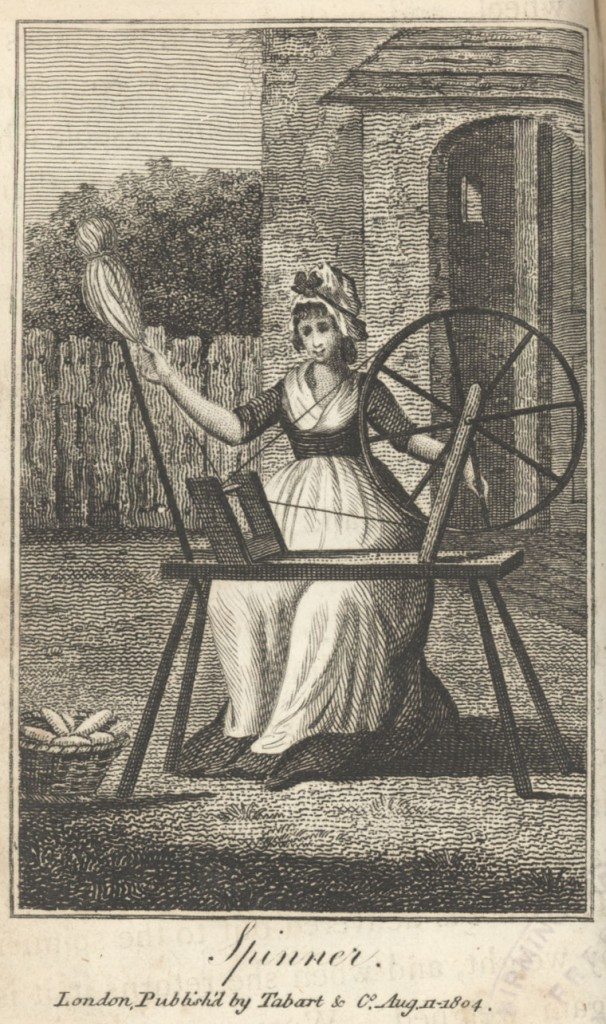 Johnson’s keen interest in applied science is firmly connected with the early years of his sojourn in Birmingham, although he burnt his diaries which would have contained more detailed information. Correspondence suggests that for nearly twenty years from 1738, Johnson was engaged in advising, making arrangements and healing quarrels between Thomas Warren, John Wyatt and Lewis Paul in connection with the first “spinning by rollers” for the cotton industry. Much of the evidence relating to the history of their attempts to establish the manufacture: letters, account books, the estimates of costs and day-books and ledgers perished in the disastrous fire of January 1897 at Birmingham Reference Library. Thirteen letters from Johnson to Lewis Paul survive, spanning the period from 1741 to 1756 and are concerned with the Midlands and the first roller spinning machine of Wyatt and Paul.  The letters were printed by Birkbeck Hill in his first edition of the Letters.

John Wyatt was a native of Thickbroom, a village near Lichfield and was related to the family of Johnson’s mother, Sarah Ford. He had worked as a carpenter in Lichfield until he moved to Birmingham to work on the invention of a spinning machine in the early 1730s.  The earliest mention of this machine is in a letter from Wyatt to one of his brothers, written in 1733 where he states that he “intends residing in or near Birmingham”.  In another letter to his brother, Wyatt writes that he was “shut in a small building near Sutton Coldfield” with his little machine, spinning the first thread of cotton ever produced by mechanical means.

The project was not a commercial success and after the failure of the enterprise to which Thomas Warren, Edward Cave and Dr Robert James subscribed, Wyatt worked at Boulton’s Soho Foundry where he invented and perfected the compound level weighing machine. In great demand at the time, Wyatt supplied weighing machines to the Corporations of Chester, Hereford, Gloucester, Liverpool and other places. Some of Wyatt’s documents reveal the versatility of his talents and were bequeathed to Birmingham Central Library. He was engaged in the design of bridges and canals and the invention of fire engines and other mechanical devices. Wyatt died in 1766 and was buried in the grounds of St Paul’s Cathedral.

In his study of Johnson’s letters to Lewis Paul, Wyatt’s partner, John J Brown traced the writer’s likely personal involvement with the invention which laid the foundations for modern spinning machinery.  According to Brown, Paul was the main mover behind the project and had conceived the novel plan of elongating cotton threads by running them between sets of rollers where they would be stretching them by having the second set revolving faster than the first. Paul then brought his idea to Wyatt, a skilled mechanic and inventor. Between 1730 and 1733 they developed the first roller spinning machine. Brown argues that Wyatt would not have been able to carry through his idea without the mechanical assistance of Lewis Paul, who in 1738 took out a patent on a spinning machine operated by rollers revolving at different velocities.

Johnson’s letters refer to the project’s difficulties, affirm his sympathetic disposition towards it and display the discretion with which he tried to assist as umpire between Wyatt and Paul. In a letter to Paul on 31 March 1741, Johnson advised: “I believe the most eligible method of determining this vexation affair will be that each party should draw up in a narrow compass his own state of the case and his demands upon the other”.  He requested that “each abate somewhat, of which himself or his friend may think due to him by the laws of rigid justice”.

Fifteen years later Johnson tried to secure support for another of Paul’s enterprises. On 12 March 1756 he wrote: “I am now thinking about Hitch [probably Charles Hitch, one of the proprietors of Johnson’s Dictionary], I am yet inclined to think he will lend money upon spindles, a security which he has found valid,” although a following letter noted: “it is impossible to guess what [may] be the answer when money is to be sought. Paul tried to get the spinning machine introduced to the Foundling Hospital and Johnson drafted a letter to the Duke of Bedford, the president of the Hospital. It proposed the erection of a machine for spinning cotton in the Hospital: “its structure being such that a mixed number of children from five to fourteen years may be enable by it to earn their food and clothing”. The letter features in Brownlow’s History of the Foundling Hospital and it is likely to have been written between 1757-9 since Paul died in 1759.  A passage of it betrays Johnson’s own unfailing criticism of the flaws in human nature and his sympathy for the plight of any projector who dared to work against the grain:

Mankind has prejudices against every new undertaking, which are not always

prejudices of ignorance.  He that only doubts what he does not know may be

satisfied by testimony, at least by that of his own eyes.  But a Projector has more

dangerous enemies, the envious and the interested, who will neither hear reasons nor

see facts and whose animosity is more vehement as their conviction is more strong.

In 1758 Paul took out a third patent for a spinning machine which was referred to by John Dyer in his poem The Fleece of 1757 and reviewed by Johnson in the Literary Magazine (No 12, 1757, 134-5).  Paul’s invention is twice mentioned in the poem: once, as “a spiral engine which, on an hundred spools, as hundred threads/with one huge wheel, by lapse of water, twines”; the second time, as “a circular machine, of new design,/ in conic shape: it draws and spins the thread/without the tedious toil of needless hands”.  Dyer admired Paul’s machine and its “upright spindles, which, with rapid whirl/ spin out, in long extent, an even twine”.