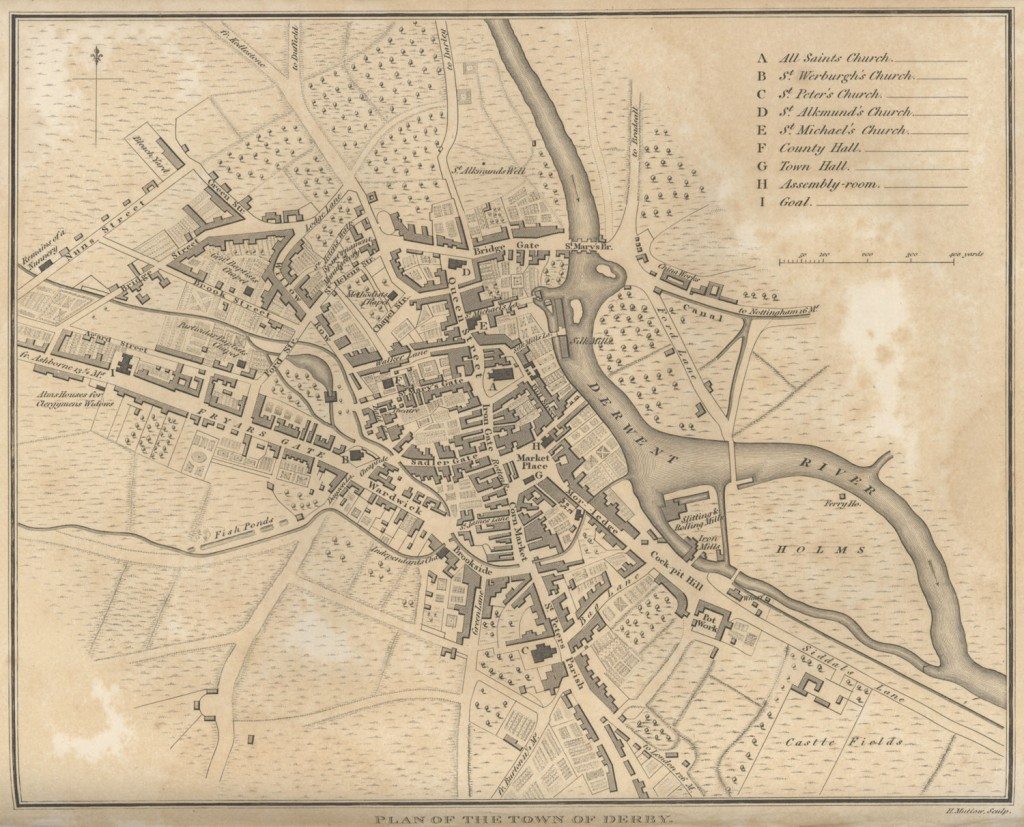 Image: Plan of the Town of Derby showing the silk mill and china works in the top right-hand portion of the map. Rev Daniel Lysons and Samuel Lysons, Magna Britannia, being a Concise Topographical Account of the Several Counties of Great Britain, Volume the Fifth containing Derbyshire, (London, T Cadell and W Davies, 1817)

In 1774 Johnson visited the silk mill at Derby with the Thrales “where I remarked a particular manner of propagating motion from a horizontal to a vertical wheel.” He was also able to demonstrate some knowledge of the mechanical process (Letters, i: 170).  The silk mill was started between 1717 and 1721 by George Sorocold who built a mill for the Lombe brothers, beside the River Derwent to house machines copied from the Italians for “doubling” or twisting silk into thread. The original five-storey building housed twenty-six Italian winding engines which spun the raw silk on each of the upper three floors whilst the two lower ones contained eight spinning mills producing the basic thread.  Entered by a bridge, and with gates made by Robert Bakewell, the prominent Derby wrought-ironsmith, the site attracted many home and foreign tourists.

Boswell also visited the silk mills on 19 September 1777 “which Mr John Lombe had a patent for, having brought away the contrivance from Italy.” Not greatly interested in technology, he was a reluctant tourist of industrial sites but admitted that he had learnt from Johnson “not to think with dejected indifference of the works of art.” Boswell admired the simplicity of the machine and “its multiple operations”, and recommended William Hutton’s History of Derby, a book which he thought was “deservedly esteemed for its information, accuracy, and good narrative” (Life, iii: 164 & n. 1).  Written more like correspondence from an old friend than a historical record, Hutton’s History of Derby was an informative personal reflection of a man born into poverty in the town in 1723.

The son of a wool-comber, Hutton was an employees at the silk mills in Derby for seven years which he called “the most unhappy years of his life.” He recalled how “the threads are continually breaking; and to tie them is principally the business of children whose fingers are nimble”.  The long hours of work and low wages together with the severity of treatment were all part of his unhappy memories of child labour: “the inadvertencies of an infant, committed without design, can never merit the extreme of harsh treatment” (History of Derby, 208).  In 1750 Hutton settled in Birmingham, a town he had fallen in love with on a previous visit, where he established himself as a stationer and bookseller, setting up the first paper warehouse in 1756. Hutton’s History of Birmingham (1782) was an immediate success and went through a number of editions.