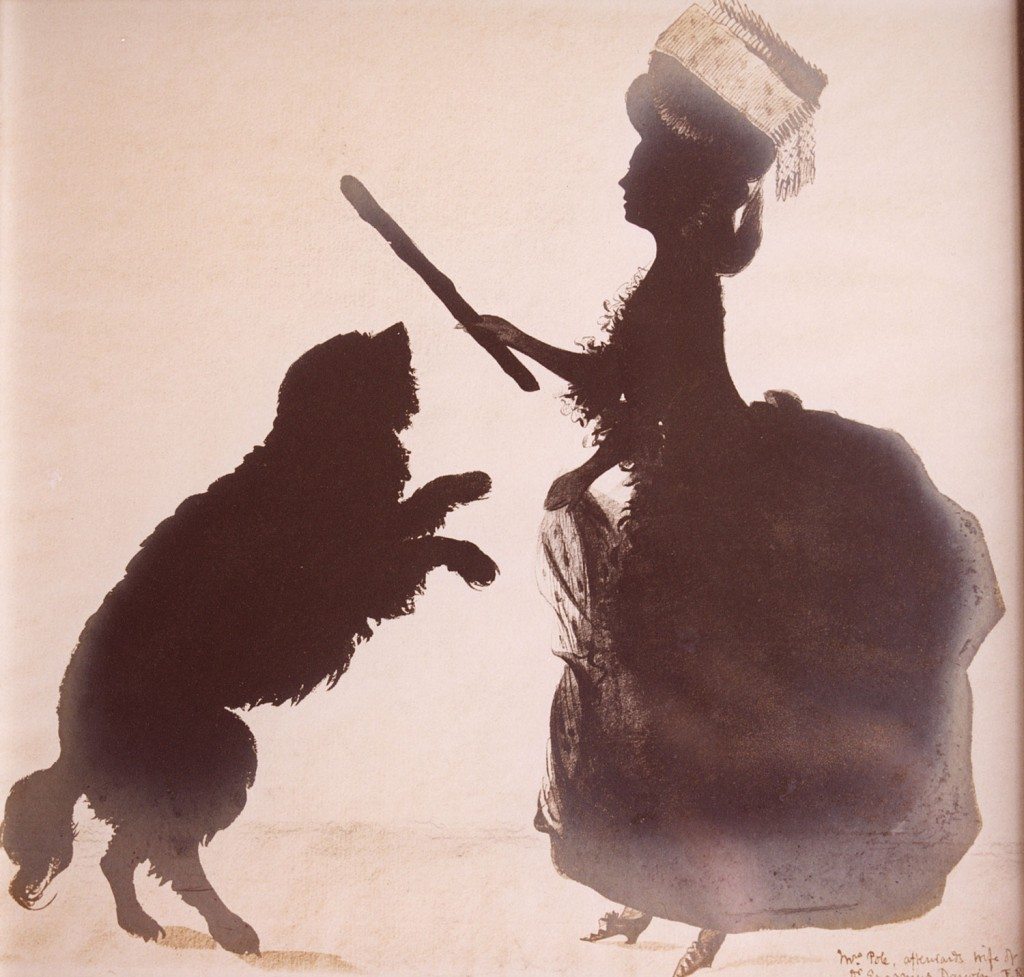 Image: Silhouette of Elizabeth Pole with a dog.

Darwin’s interest in gardening might have been strengthened by Mrs Elizabeth Pole of Radburn Hall (Derby), the wife of Colonel Edward Sacherevel Pole. Darwin met her in 1777 when she brought her sick children to see the famous doctor. Elizabeth Pole was herself a talented gardener and, in Anna Seward’s words,

“was then in full bloom of her youth and beauty. Agreeable features; the glow of health; a fascinating smile; a fine form, tall and graceful; playful sprightliness of manners; a benevolent heart, and maternal affection in all its unwearied cares and touching tenderness, contributed to inspire Dr. Darwin’s admiration, and to secure his esteem.”

“Farewell! A long farewell! – your shades among
No more these eyes shall drink Eliza’s charms;
No more these ears the music of her tongue!-
O! doom’d for ever to another’s arms!”

Colonel Pole died in 1780 and left her wealthy thirty-three year old widow. People thought that Darwin who was 15 years her senior, would have had no chance against the young officers and gentry who surrounded her. An amusing tease was the fine silhouette depicting Eliza playing with a frisky dog. According to the family tradition, the dog is supposed to be Erasmus.

However, she agreed to marry Darwin, and on the day before the wedding he wrote:

On, on, gay dance and jocund song
And lead the lazy hours along!..
Thou, beamy star of morning shine!
Tomorrow makes Eliza mine.

Their wedding took place at Radburn church on 6 March 1781. Unfortunately, Elizabeth refused to live in Lichfield. After the wedding, they left for Radburn, and later for Derby. Anna Seward wrote: “A handsome young widow, relict of Colonel Pole, by whom she had three children, drew from us, in the hymeneal chain, our celebrated physician, our poetic and witty friend.”

Darwin’s second marriage was also a very happy one. In addition to Darwin’s sons and daughters and Elizabeth’s own offspring, they would have seven children in the next nine years.