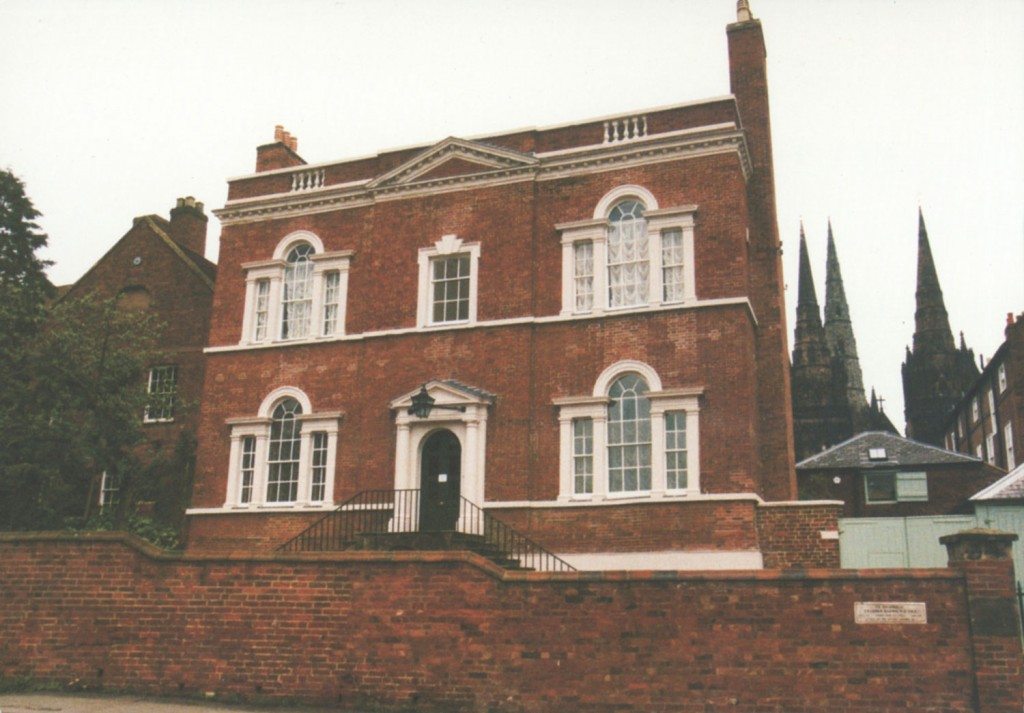 Image: The front of Erasmus Darwin House, Beacon Street, Lichfield, showing the neo-classical façade which Darwin created on the front of an older building. He lived in the house from 1758 until 1781. In the foreground is a plaque commemorating Darwin as the author of The Botanic Garden. The Cathedral and a row of houses in the Close are visible on the right.

Darwin lived in the Cathedral Close when he arrived in Lichfield in 1756. In the spring 1757 he met Mary (Polly) Howard (1740-1770), the seventeen year old daughter of a local lawyer, “a blooming and lovely young lady”.

“Then, peerless Fair! Whom all my Soul approves,
Esteems with Reason, and with rapture loves,
Indulgent hear thy Poet’s honest Plea,
And sometimes give one tender Thought on Me.”

They married on 30th December 1757 and soon bought a large half-timbered house in Beacon Street which became their happy family home.

The house appears to have been one of the oldest houses in Lichfield. Recent archaeological research has found traces of 13th century medieval construction. In the spacious cellar there are also architectural remains of store rooms which date from the post-Civil war period. In his turn, Darwin rebuilt the house. He added a fashionable neoclassical façade with large Venetian windows facing Beacon Street, and extended several rooms and the cellar. The house was separated from the street by a narrow gully, so Darwin built a bridge with Chinese paling across it and planted lilacs and roses in front of the house.

In 1999, the house was renovated and opened as the Erasmus Darwin Museum. The square at the back of the house has been developed as an 18th century garden of medicinal herbs.